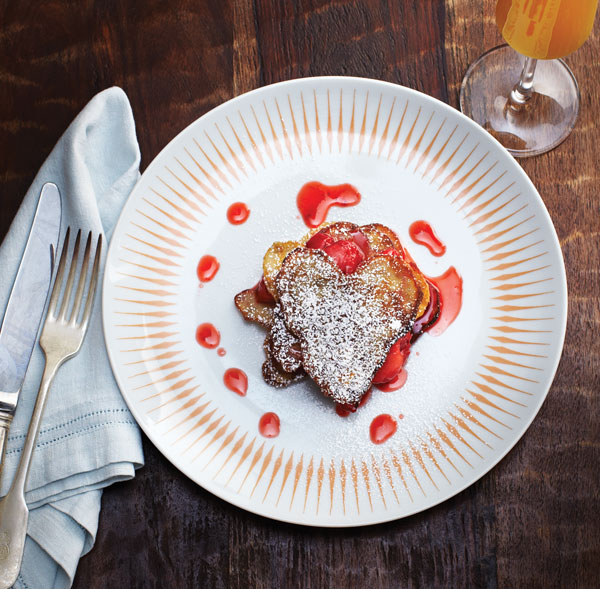 Cynthia Wong, pastry chef at Empire State South, stands behind the stainless steel gas range in her modern Grant Park kitchen, dropping dollops of batter into a sizzling skillet. With the back of her spoon, she coaxes the edges of each thin, fritter-like cake to form a heart shape—an edible valentine. “If you’re looking for big, fluffy pancakes that have rivulets of syrup running down their tops and sides, these are not the ones,” she says, as the edges begin to turn crisp and brown. Made with a few basic staples and leavened with nothing more than egg, these simple treats were among the first dishes she ever cooked for her husband, John David. Of all the desserts in her flourishing repertoire he has sampled since, these remain his favorite.

She owes their origin to her Mobile, Alabama, upbringing, where she grew up the product of a Chinese father and Burmese mother, on a cuisine she laughingly describes as “prefusion fusion.” Her father, a doctor, landed a job at the university there after she was born, and her mother entertained herself by trying recipes mostly clipped from Southern Living, along with traditional dishes of their Asian heritage. Sometimes she melded them, enthusiastically tossing sesame seeds into fried chicken batter (a success) and infusing ginger into meatballs for Italian spaghetti (not so much.)

But baking was never her mother’s forte. Still, she could not bear to see food go to waste. “When I would come home from school, she would make these pancakes as a snack, with bananas so overripe they were almost liquefied inside their peels. There wasn’t a real recipe involved. They’re sort of a slacker’s banana bread, for people who don’t want to go to the trouble of baking a loaf.”

With the help of a mail-order “Gold Medal Flour Cookbook,” Wong taught herself to bake pound cakes and sugar cookies to satisfy her dad’s sweet tooth, and became “obsessed.” Later she studied pastry professionally, in Paris, before living in Spain and eventually moving to Atlanta. She worked as a restaurant critic for Creative Loafing before returning to the kitchen, winning accolades for her desserts at Cakes & Ale in Decatur, and more recently, Hugh Acheson’s Empire State South in Midtown.

But when she and her husband are craving a late-night nosh, she still turns to her mother’s thrifty invention—with one modification: “My mom used a plain nonstick skillet to be low-cal, but I like to cook mine in hot clarified butter. It makes their edges even crispier in contrast to their tender interiors.”

Instructions
1. Preheat oven to 200 degrees. In a large bowl, mash the bananas one at a time with a fork until mostly smooth. Whisk in the sugar, then the vanilla paste or extract. Crack the egg into the bowl and whisk into the mixture. Sprinkle the flour over the top of the batter and whisk in with your fork until thoroughly incorporated, making sure there aren’t any lumpy, floury pockets.

2. Heat a nonstick frying pan over medium-high heat. Add enough clarified butter or oil to the hot pan to lightly coat the bottom. Using a big soup spoon, drop the batter into the hot pan. The pancakes will spread fairly thin and start to bubble a little. After about 2 to 3 minutes, when the edges turn golden brown, flip them over and cook the other side.

3. Transfer the cooked pancakes to a paper towel–lined plate and keep warm in oven. Repeat this process using the rest of the batter. Add more clarified butter or oil as needed while cooking new batches so there is enough to make the pancake edges sizzle. Sprinkle the hot pancakes with cinnamon-sugar or powdered sugar. Garnish with strawberries (or other fruit if desired). Best enjoyed with hot black coffee.

This is an extended version of an article than originally appeared in our February 2012 issue. 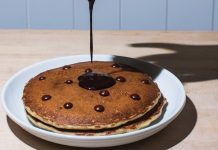 Review: Pancake Social—come for the pancakes, stay for the breakfast sandwich 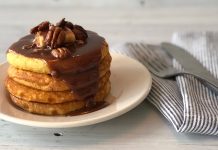 Anne Quatrano walks us through the menu for Pancake Social