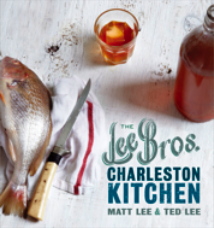 By Matt Lee and Ted Lee
From The Lee Bros. Charleston Kitchen

There was a time not too long ago when, from the stoop of our office on Broad Street, we could have witnessed every weekday the 2 p.m. exodus of lawyers, bankers, architects, and insurance and real estate agents, ambling their way south from the business district to their homes for “dinner.” Dinner, for traditional Southern families, was the hearty midday meal, served in the dining room with linens on the table—and often with mother’s silver. “Supper” was the lighter evening meal, usually a casserole or baked savory item that the hired cook might cover and stash in the fridge before leaving for the day. The dish would then be reheated and served with a soup or salad, and with a simple sweet for dessert. This arrangement of the day’s meals has gone the way of the three-martini lunch, with dinner out at a restaurant finding favor as a way to entertain, leaving the workday uninterrupted (and the kitchen clean).

Though we are far from traditional in our habits, we find there are many evenings when we’re yearning for a light supper to serve our families with toast and a salad. On those days this creamy, cheesy crab casserole is a favorite with our wives. It is adapted from a popular recipe called “Meeting Street Crab Meat” contributed to Charleston Receipts by Mary Huguenin , the cookbook’s co-editor, and presumably named for the street the family lived on, an important north-south corridor on the peninsula.

The earlier recipe offers a variation in which shrimp is partnered with the crab; the later recipe suggests a substitution of crab for shrimp. We took a few liberties with our own crab gratin recipe—which we’ve named, in turn, for the location of our sometimes test kitchen—such as dialing bcd the amount of flour in the dish, and lightening the cream base with shellfish broth, which simultaneously amps ups the flavor. And we sauté shallots with a few pinches of nutmeg in making the creamy sauce because, in concert with the zip of the sherry, it creates some intrigue. It’s also quite easy to do.

Outside of the supper realm, Wentworth Street Crab Meat makes a great self-serve hors d’oeuvre at a cocktail party, to be spooned by guests onto thin baguette slices or crackers. If you choose that route, prepare this dish in a larger, crocklike vessel (instead of shallow gratin dishes).

2. In a small saucepan, heat the broth over high heat until it simmers. Put the flour in a small bowl or ramekin, spoon 3 tablespoons of the broth into it, and whisk it to a smooth paste with a fork. Pour the rest of the hot broth into a bowl and reserve both broth and paste.

3. Return the saucepan to the heat and melt the butter over medium-low heat until it’s frothy and add the shallot, salt, black pepper, and nutmeg. Cook, stirring occasionally, until the shallot is fragrant and translucent, but not brown, about 3 minutes. Add the cream, sherry, the reserved broth, and reserved flour paste mixture, and whisk to combine. Bring to the gentlest simmer and cook, stirring occasionally, until the cream sends up thick bubbles and is thickened to the consistency of a gravy, 6 to 8 minutes. Add the crab meat and cook just until it is heated through and the sauce coats the crab meat thickly, about 4 minutes.

4. With a slotted spoon, divide the crab meat between two 6-to-8 ounce gratin or brûlée dishes and put them on a rimmed baking sheet. Spoon the crab gravy over the crab meat just shy of covering the meat (you may have some left over for sopping with bread; lucky you!). Sprinkle the cheese over the top of the casseroles, and broil about 2 inches from the heat, until the cheese is gently browned and bubbling, about 3 minutes. Remove the casseroles from the oven and dust with paprika, if using.

5. Serve with spoons for scooping the casserole onto the toast.