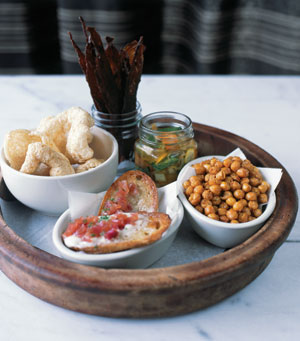 To Anglo ears, the word “abattoir” has an almost spiritual chime. Without knowing its meaning, one might guess that it refers to a labyrinth of monastic cloisters, or the dwelling of a particularly devout ascetic. But it’s French for “slaughterhouse,” the term being derived from the verb abattre, meaning to shoot, knock down, or demoralize. Abattoir is one of the least onomatopoeic words ever adapted into the English language.

The new westside restaurant called Abattoir can likewise discombobulate. The name may be phonetically pleasing, but it makes a gruesome moniker for a restaurant—even if it does correspond to the space and theme. Abattoir resides in the White Provisions building, a former meatpacking plant. Initial word of mouth buzzed that Anne Quatrano and Clifford Harrison’s new venture would specialize in “snout-to-tail” cooking featuring “local proteins.” It sounded like PR-speak for the choice animal parts that the British sometimes nickname “the squiggy bits”: sweetbreads, liver, kidney, brains, tongue, and so forth. Would Atlantans embrace an in-your-face menu full of organ meats?

It turns out to be an irrelevant question. True, all the charcuterie, meaty terrines and roulades, bewitching preparations of offal, and house-made snacks such as beef jerky and “thin Jims” can tempt vacillating omnivores into carnivorous overdrive. But Abattoir’s menu encompasses almost fifty modestly sized and moderately priced dishes, including well over a dozen seafood and produce-rich options. This is, after all, a restaurant by Quatrano and Harrison, the chefs/owners of Bacchanalia, Floataway Cafe, and Star Provisions market—three of Atlanta’s most successful culinary hallmarks. They made Joshua Hopkins, a Bacchanalia veteran, the executive chef and a partner at Abattoir, and the three of them have a solid grasp on the psychology of the city’s dining public. The name may jar, but the cooking invigorates, comforts, and occasionally pushes boundaries in easy-to-swallow ways.

Not that the trio can resist a little cheekiness here and there. As you walk up a flight of stairs to the restaurant, you’ll notice an Angus beef butcher chart taped up in one of the windows. Bovine decorating touches mostly end there, though. Designer Dominick Coyne didn’t entirely disguise the dining room’s industrial past, but now it more resembles a restored farmhouse than a processing facility. Weathered wooden slats line several walls around the open room, softening the concrete edifice. Dim, honeyed lighting casts a pastoral glow, offset by gray leather banquettes and marble tabletops that inject metropolitan élan.

When you sit, you’ll see that the large paper menu doubles as your place mat. The list changes constantly, though its structure remains the same. On the left side are lighter dishes divided into categories: “Snacks,” “Salted/Cured,” “Food in a Jar” (pickles and pâtés), and “Local Produce.” The right side describes more substantial dishes, as well as cheese and desserts. Wine options flank the food descriptions, and it’s hard to resist ordering a bottle when so many respectable options (from a fresh, uncomplicated ugni blanc from France’s Côtes de Gascogne to a Ridge Three Valleys zinfandel blend from Sonoma) lie in the $15 to $30 range for both whites and reds.

Dig in by mixing and matching nibbles from up and down the food chain: One of the servers will set them down all together on a circular wooden tray. Everyone goes bonkers for the ceci peas—puffed, fried chickpeas dusted with cumin. Pommes frites with mayonnaise are textbook fantastic: crisp on the outside, silky on the inside. Chicharrones may be pork rinds, but they’re nothing like the gnarly squiggles sold in plastic bags in gas stations. These cloudy beauties crunch loudly, and their taste only faintly reveals their porcine origin. Who needs flavored potato chips?

For contrast, opt for Georgia white shrimp pickled with fennel or the prismatic salad of heirloom tomatoes. The kitchen recently began offering terrines teamed in tasting portions—a smart idea. We received a judiciously seasoned country pork roulade with a pleasant coarseness, a slightly more assertive rabbit terrine with pickled onions, and a rustic slice of head cheese—a terrine made predominantly from mild pork cheek meat. Trust me: The concept of head cheese is much less terrifying once you’ve experienced it. If the terrines make you squeamish, look to the charcuterie platter—a spread of four or five house-made salamis, each a nuanced expression of meat and spice.

While we’re on the subject of scary foods, let’s plunge into the offal selection. Tripe stew is the most unassuming version you’ll ever try, with the lacy slivers adrift in an aromatic herb broth. To lure the uninitiated, the kitchen pairs the tripe with the most popular protein of the decade: pork belly. Well played. They make a playful combination. Capers and egg yolk elegantly dress veal sweetbreads, though I wish the sweetbreads came with a crisper exterior. No such complaints about the lamb sweetbreads draped in a sour plum sauce and scented with rosemary. Fruity, puckery, piney, gamy: what an extraordinary collusion. If you venture to try only one don’t-think-too-hard-about-where-it-came-from plate at Abattoir, make it the lamb sweetbreads. And if you aren’t at all squeamish, dive into the lamb liver fritters, served with tomato relish to temper the funkiness.

On to more placid alternatives: The pork chop is robust and juicy and feels like a steal for $18. Bacon and citrus brighten shrimp stew. Pan-roasted trout impresses with its honest simplicity. The Abattoir burger warrants a caveat: Made with pork and beef, salted, and vacuum-sealed to briefly cure, it’s really a burger en route to being a sausage. I wouldn’t mind seeing this version alongside a more typical burger, or even the foie gras and truffle-studded affair sold at Star Provisions.

I plan to return often to Abattoir on my own dime—which is about the highest praise a critic can give—but a few gaffes bear mentioning. The kitchen team can have a heavy hand with salt: At one meal, the chicharrones and a duo of braised kale and trigger fish were oversalted to the point of inedibility. And this is a personal preference, but the local filet beans with small tomatoes and herbs are served raw: They taste green and stringy. I’m not a Southerner who needs his beans cooked to pap, but I’d prefer at least al dente.

Dessert expunges most sins. The flaky, gushy fried fruit pie (filled at first with a rotation of summery berries; expect apple soon) demolishes any leftover childhood fondness of McDonald’s fried pies. Chocolate pot de crème is dense and silky. But the true diet wrecker? Hot maple-bacon beignets. Nearly every table orders them. And why not? In a cathedral of meat, it seems only appropriate to slip a little cured pork into the evening’s sweet finale. —Bill Addison

Photograph by John Autry and Charlotte Fekete. This review originally appeared in our September 2009 issue.