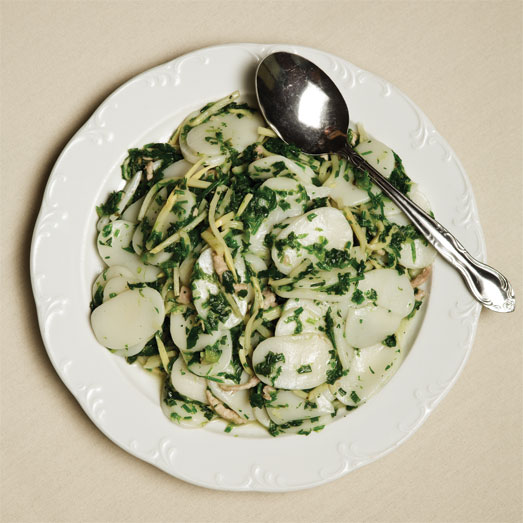 Four years ago, local food fanatics discovered the Szechuan cooking of Peter Cheng in a scruffy Marietta strip-mall joint called Tasty China—an innocuous name that became synonymous with nuclear meltdowns of the mouth. Cheng, who had two food writers chasing after him for the New Yorker and the Oxford American this year, possesses a culinary charisma that is two parts Pied Piper and one part Marquis de Sade: He wrangles devotees, hurting them so good with his “hot and numbing” beef rolls and his fried eggplant riddled with chiles, and then he leaves them for a restaurant in another town.

Cheng departed Marietta for Kentucky in 2007, but Tasty China remains a benchmark of Szechuan combustion. Its wontons in red chili oil is a disturbingly scarlet soup, like something grisly glimpsed in an emergency room that you only allow yourself to take in peripherally.

How surreal, then, to be sitting in a restaurant—in Norcross—also named Tasty China, not eating hot and numbing beef but savoring mild and soothing tofu flecked with spinach. And fragile soup dumplings filled with delicately seasoned pork. And bright green fava beans tossed with gently pickled vegetables.

Shirley Shih, who runs this restaurant with her parents, explains the menu with the earnestness of a rookie museum docent. “This is the only restaurant that specializes in Shanghainese food in Atlanta,” she begins. “The taste is lighter and a little sweeter than other regional Chinese cooking. Our menu represents a range of dishes from eastern provinces around Shanghai.”

The name replication is happenstance. “We have no affiliation with the Marietta restaurant,” Shih told me in a phone interview. “The previous owners called this place Tasty China and ran it as a buffet restaurant. They sold it to us earlier this year, and we kept the name.”
Despite the potential confusion and the deep irony that these counterparts serve exceptionally dissimilar cuisines from the same vast country, there is room for two Tasty Chinas in the metro area. Szechuan cooking may induce more of an endorphin rush, but the Shihs offer a cuisine that kindles its own mellow euphoria.

The menu requires some deciphering, though. Ignore the back pages that list the “special dishes” and the “chef’s specialties”: That is where the Americanized Chinese standards have been relegated. (And those warhorses—chicken with broccoli, beef lo mein, and such—do show up on the restaurant’s lunch buffet, which has fans among the local office workers.) Pinpoint instead the dishes whose descriptions begin with “Shanghai” or “Ningbo” or “Nanjing.” These are the jackpots that emphasize the talents of the family’s patriarch, Steven Shih, who mans the kitchen.

Shanghainese meals often start with simple, protein-focused small plates typically served cold. Suzhou smoked fish may be a misnomer (the carp is actually cut into small pieces, deep-fried, and glazed with a sweet sauce), but these intense, bronzed morsels calibrate the palate to the nuances of this type of cooking. Strips of pork belly in wine sauce include chile flakes that only nip the taste buds with heat. Shirley Shih tried to warn me that this section of the pork belly is a chewier cut than the bacony hunk everyone adores these days, but I enjoyed the al dente texture. Drunken chicken, a Shanghai classic, tastes a bit too strongly of cooking sherry for my taste; I prefer the similarly prepared duck, whose slight gaminess better stands its ground against the alcohol.
Cold meats splashed with fortified wines might nudge some diners past their comfort zones, but dumplings and noodles will lull them back to contentment. Xiao long bao, or soup dumplings, are a specialty of Shanghai, and these grew better each of the three times I tried them—plumper, juicier, yet daintier. Be sure to splash them with ginger-flecked black vinegar, which coaxes out the flavors of the pork filling and hot liquid. The pan-cooked buns are much sturdier, but a hard sear from a few moments in the wok gives them the satisfying crispness of fried pot stickers.
“Rice ovalettes” may sound strange, but it’s an accurate enough description: These oblong bites, somewhere between a noodle and a dumpling, are not unlike the flattish rounds of dough in some versions of Southern chicken and dumplings. Made from rice flour, they come tossed with crunchy bamboo shoots, a bit of pork, and either spinach or salt-preserved vegetables. Eat them quickly before their texture turns gluey.
“Ningbo wonton and yellow croaker clay pot” takes wonton soup to higher levels. The wontons float in a large bowl as majestically as jellyfish in the ocean far from shore, and the dumplings remain silky. The fish adds faint pungency to the broth, which, to be honest, at first sip seemed bland. It was only when its temperature cooled that I perceived its muted richness. That’s how Shanghainese cooking can be: It sometimes takes attention and a little patience to appreciate its fine subtleties.
And like most of the world’s cuisines, occasionally the exotic can verge on the strange. “Hangzhou-style fish topped with pine nuts” is a labor-intensive effort that, unfortunately, ends up tasting like candied fish. Had I ordered it as my sole main course, I would have left unhappy. But I actually enjoyed it as one element in a collage of dishes, which is the best way to eat Chinese food.

If I were on a budget and could only afford one entree (most of which range from $9 to $13), I’d choose the “Yangzhou giant meatball with crab meat pot.” Also known in Shanghai as a “lion’s head,” the whopper sphere is a meatball out of Roald Dahl’s imagination: freakishly large and utterly scrumptious. Covered with cabbage leaves and glass noodles in gurgling broth kept at a simmer using Sterno, it certainly qualifies as a one-pot meal. If you have room for dessert after that, request the refreshing, brown-sugary shaved ice topped with mangos, kiwi fruit, and strawberries.

The Shihs introduced their specialties in March, and the spare, brightly colored dining room held increasing numbers of customers on each of my visits. As word spreads about the second Tasty China, I’m wondering if doubleheader meals at both restaurants in one night may come into vogue. A word of advice: Start in Norcross, lest the glorious hellfire of Marietta’s blazes scorch away your ability to relish the gentleness of Shanghainese delicacies. —Bill Addison

Photograph by Christopher T. Martin. This review originally appeared in our September 2010 issue.