For a kid, the center of heaven might be the Walnut Street Bridge, built in 1891 in downtown Chattanooga. Between its cerulean-blue trusses, little legs can scramble 2,400 feet across the Tennessee River, pausing to peer at the water from a raised sidewalk removed from bicyclists and dog walkers. The iconic walkway links the popular Tennessee Aquarium with Coolidge Park, home to thirteen acres of greenspace, a splash pad, and a restored carousel from 1894. Another local landmark, Clumpies Ice Cream Co., backs up to the park and serves handcrafted, seasonally inspired goodness in flavors like Honeycomb and Campfire.

Nestled on a picturesque riverbend in the Appalachian foothills, this cheerily named town has long delighted the young at heart. They have slept in vintage train cars at the Chattanooga Choo Choo, and they have seen Rock City and its kitschy black-lit gnomes. In the last decade or so, as those wizened creatures (the gnomes, not the tourists) graduated from creepy-and-dated to creepy-and-cool, the city’s restaurant and nightlife scene also came into its own. James Beard Award darlings like St. John’s and Easy Bistro mingle with colorful, low-key hangouts like Champy’s Chicken and Mojo Burrito. Add in a wealth of options for outdoor recreation, and you have the Pixar movie of vacation destinations—a treat for the whole family.

The city owes its versatile appeal to geographic good fortune, decades of careful planning, and a pluck that’s only possible in a place that has experienced rock-bottom. In the early twentieth century, Chattanooga was a prosperous manufacturing and rail center known as the Dynamo of Dixie. Forces that played out across America—globalization and suburbanization—would turn it into a rust belt city of the South, while the surrounding mountains trapped air pollution. By the 1960s, the corrosive soot was known to peel paint off cars. In 1969, the EPA ranked Chattanooga’s air the dirtiest in America, which Walter Cronkite famously announced on the evening news.

In the 1980s, a new generation of civic leaders mapped out a vision for a post-industrial city. Renouncing the closed-door decision-making of the past, they courted citizen engagement and forged public-private partnerships, a collaborative approach that became known as the Chattanooga Way. Devised in community meeting rooms, the Tennessee Riverwalk—now a thirteen-mile-and-growing multiuse path—opened in 1989. Three years later, the heralded walkway debuted a 400,000-gallon freshwater aquarium that’s still considered among the finest in the world. (An oceanic sister aquarium was added in 2005.)

More recently, that forward-thinking spirit powered the town’s rebirth as a tech hub. Smart investments in fiber-optic infrastructure mean Chattanoogans enjoy one of the fastest citywide internet speeds in the country, 10 gigabits per second. A downtown “innovation district” lures entrepreneurs with spaces for coworking, networking, and coffee drinking. This burgeoning creative class includes chefs and mixologists. “We have these incredibly talented chefs and businesspeople, and they all embrace the idea that we can raise our city up by collectively bettering ourselves,” says Kaleena Goldsworthy, beverage director at Proof Bar & Incubator, which helps local businesses in that industry get off the ground.

Over the years, an environmental renaissance has matched the economic growth. Spurred by the devastating EPA report, an air pollution control bureau worked to clear the smog, achieving federal clean air standards in 1989. In 1992, long before green transit was cool, the city commissioned a fleet of free electric buses to shuttle tourists and locals around town. A decade later, forty-eight miles of the Tennessee River became a recreational “blueway,” replete with kayak launch points and campsites on protected land. Chattanooga’s natural assets—seemingly endless mountain trails for hiking and biking, a sweeping river gorge for paddling, world-class sandstone for climbing—were ready for their close-up. “Best Town Ever” proclaimed Outside magazine in 2010, and again in 2015.

But if the city hasn’t finished its comeback story, it has surely come a long way. A weekend visit is plain fun: Feeling the pull of nature? Rent a kayak or paddleboard from L2 Outside, an outfitter in Coolidge Park, and hit the river. Or drive fifteen minutes to Lookout Mountain, where the National Park Service maintains about forty miles of vista-filled hiking trails. “There’s a style of trail for everybody, from flat and meandering to lung-busting straight up the mountain,” says Schandra Loveless, customer relations specialist with Outdoor Chattanooga, a division of the city’s economic development department that connects people with recreational activities.

For an urban hike, climb the switchbacking Riverwalk to the Bluff View Art District, a quaint enclave perched atop cliffs. Here you’ll find the acclaimed Hunter Museum of American Art; the River Gallery Sculpture Garden; and an herb garden that serves the neighborhood bakery, coffee shop, and trattoria. Or head to the Southside Historic District, home to some of the city’s best restaurants and bars—including the Flying Squirrel, a gastropub that’s won national awards for its design and cocktails—as well as Station Street, a cobblestone strip with an open-container ordinance. Got little ones? Try Public House, a refined Southern spot where the kids menu includes a required veggie and (pending good behavior) a sweet treat.

The grande dame of the Southside is the Chattanooga Choo Choo. Formerly Terminal Station during the town’s rail heyday, the Beaux Arts–style building was erected in 1909 and spared the wrecking ball in the 1970s when investors turned it into a hotel. An ongoing overhaul has converted hundreds of units into apartments and added restaurant and entertainment amenities. In 2021, the remaining guest rooms will get a boutique hotel–style revamp.

At the Choo Choo, the city’s evolution is on full display. You see it in the pretty arched dome beneath which travelers passed a century ago. You see it on the cartoonish rooftop sign from its earliest days as a hotel. And you see it in Glenn Miller Gardens, once the station’s fourteen-track platform area, where kids can play oversized checkers while adults sip craft beer poured from a historic train car. This rose-accented courtyard is quintessential Chattanooga, a charming playground for everyone.

Drive a Swincar
The Reflection Riding Arboretum & Nature Center opened in the 1950s as a “botanical drive-through.” These days, the only cars exploring its 300-plus forested acres are Swincars, electric off-road vehicles that make almost no sound and use spider-like arms to tackle tough terrain. (They also come in a wheelchair-friendly version.) The nature center partnered with Chattanooga-based Adventure Sports Innovation, the vehicle’s first North American distributor.

Scale a wall
The crags around Chattanooga are world-famous, but beginner rock climbers are better off learning the ropes at a climbing gym. That’s not a sacrifice at the flagship of High Point Climbing and Fitness, a retrofitted movie theater offering 30,000 square feet of climbing, including a Kids Zone and transparent outdoor walls soaring sixty feet above Broad Street.

Ride the Incline
This mile-long cable railway has escorted passengers to the top of Lookout Mountain at a cool 72.7 percent grade (read: straight up) since 1895. The attraction recently upgraded its trolleys for the first time in thirty-two years. They now offer air conditioning, wheelchair accessibility, and bigger windows for more aah!-inspiring views of the Chattanooga valley. 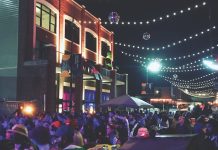 Spirited Fun: Ghost hunters reveal some of the liveliest places in their cities