These days, you don’t often hear the term “boom town” associated with a small community. But this creative village in the Lowcountry marshes is happy to break the mold. Bluffton’s population has exploded by more than 120 percent since 2000, and the median age of its residents is thirty-three. This injection of youth is both the cause and effect of a thriving arts scene based in the historic district, Old Town Bluffton. The neighborhood itself is a work of art, filled with restored buildings from the nineteenth and early twentieth centuries. Admire the weathered wooden Church of the Cross, a gothic structure built in 1857, and don’t miss the Heyward House, a classic 1841 plantation home that doubles as a visitors center. Artists and artisans showcase their works throughout the district; highlights include Fantozzi’s Wrought Iron Design, Al-Harry Furniture Design, and the Filling Station Art Gallery. After browsing for an original piece to bring home, take a short stroll to the May River, where everything from baptisms to boating still takes place.

Inn at Palmetto Bluff  / A town unto itself, this luxury resort features a variety of accommodation options, half a dozen dining experiences, a golf course, and a spa. montagehotels.com

Rose Hill Mansion / A stunning example of Gothic Revival architecture, this private residence is open to the public for tours every day at 2 p.m. Reservations required. rosehillmansion.com 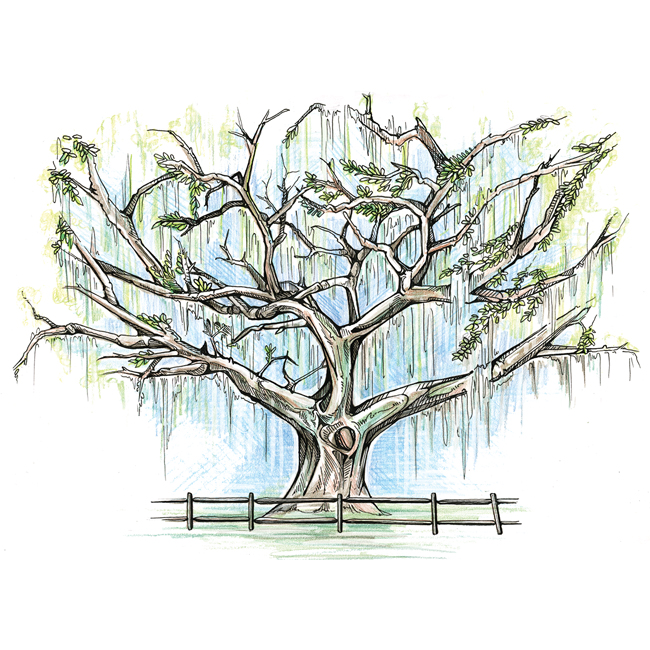 Secession Oak
In 1844, Congressman Robert Barnwell Rhett stood beneath an ancient live oak in downtown Bluffton and made a fire-eating speech riling up local furor over perceived abuses by the federal government and its Yankee leaders. The offense to South Carolina’s sovereignty was so outrageous, he claimed, the state should consider splitting off from the Union. The speech spurred a Southern nationalist movement, and seventeen years later, South Carolina became the first state to secede from the Union. The man, the cause, and the Confederacy are, of course, long gone. But the oak (some estimate its age at more than 400) still spreads its moss-draped branches over Old Town Bluffton. Seventy-five feet tall, it is a peaceful symbol of a turbulent past.