Home Travel Where to Stay: Spotlight on the Willcox Hotel

I’ve never spent more than ten minutes in a hotel lobby before this trip to the Willcox in Aiken, South Carolina. Of course, there aren’t many lobbies like it. It’s not just the way it looks—with floor-to-ceiling curly-pine paneling and exposed ceiling beams that conjure a gentleman’s study in an English manor house—it’s the way it feels. While most lobbies serve as a place for visitors to catch their breath after a day on the town, the one at the Willcox is a spot where the town wanders in to unwind.

Often referred to as Aiken’s living room, the lobby at this landmark hotel hums with activity. A trio of women in floral-print sundresses perch on a sofa, balancing small plates of lamb lollipops atop crossed knees and catching up on local happenings. A silver-haired lady seated at a window table hails a couple of fellows in polos and chinos as they step through the door. Waiters wind around the sitting areas, hoisting trays of Champagne and Sazeracs, mules and martinis. And as the denizens of this room shout greetings and gather together, I sit back and take it all in.

Frederick Willcox opened the hotel in 1900, and it quickly became the town’s social hub. Wealthy Northerners traveling to Aiken, the “Winter Colony,” to escape the cold used it as a gathering place, where they discussed the day’s polo matches or fox hunts. Over the years, it welcomed a number of notable guests, including Franklin D. Roosevelt and Winston Churchill, for whom its two premier suites are named.

But like many turn-of-the-century hotels, the Willcox also faced its share of struggles. During the second half of the twentieth century, it endured multiple closings, reopenings, sales, even a prolonged shuttering. In 2009, the hotel’s current owners went to work on a reboot. They opened a restaurant just off the lobby, reopened the spa, and retrained the staff to welcome everyone—from longtime neighbors to visiting dignitaries—warmly. Their efforts transformed the Willcox from a stuffy old-guard establishment to a clubhouse for the community.

From my lobby perch, I feel the embrace. And though a crackling fire and the softest of beds await me upstairs, I’m not ready to retire just yet. I have an old-fashioned in my hand, and the sundress-wearing ladies are within easy earshot. I think I’ll linger in the lobby a little longer and catch up on some local gossip.

Trolley Tour
Join lifelong Aiken resident and unofficial town historian Judith Burgess on a two-hour Saturday morning tour of the streets and landmarks her family has known for centuries. In addition to her girlhood memories, Burgess regales tour-goers with stories of well-known visitors and residents from Fred Astaire and Paul Newman to Minnie Pearl and the Duke of Windsor. Also included is a guided walk through Hopelands Gardens and the Aiken Thoroughbred Racing Hall of Fame and Museum. visitaikensc.com

Equestrian Events
Experience the town’s horse-centric heritage at the Aiken Spring Classic Horse Show, which welcomes competitive jumpers April 18 through May 1. Or join the Aiken Polo Club for a match at Whitney Field, the nation’s oldest polo field in continuous use (since 1882). Games take place Sunday afternoons April through mid-June. psjshows.com, aikenpolo.org 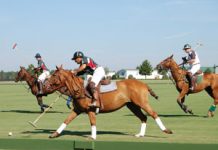