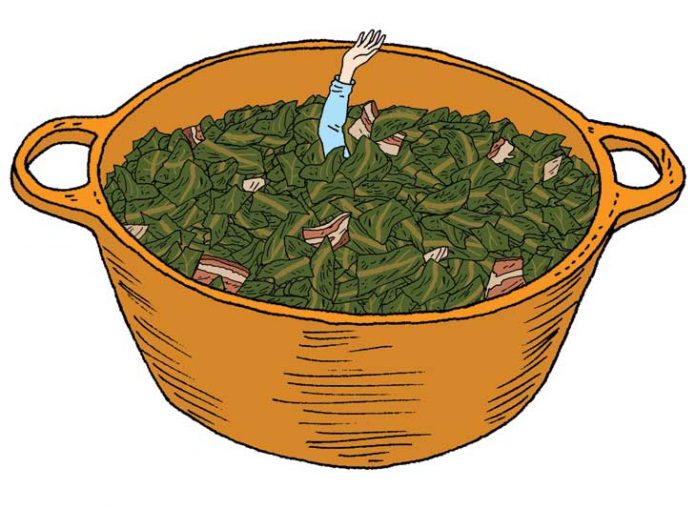 When I was a kid, I would drive a spike through my eye before eating a bowl of collard greens. Truth is I didn’t even lay eyes on collard greens until I moved to Atlanta when I was twenty-seven, which, some would mistakenly say, is not a kid but an adult. I do remember, though, that upon my first glance of collards, all steamy and stewed in a pot on my friend’s mother’s stove, I thought I’d spew like a busted beer keg. Later, at the table, I let the bowl of collards pass by me. “Eat it, it’s fresh,” my friend’s mother insisted. I declined because I wasn’t raised to eat vegetables. I wasn’t even really raised to eat meat. In fact I think I am proof that children can survive solely on salt and sugar. By the time I moved to Atlanta, my diet consisted entirely of chocolate, cheese, and alcohol.

You might think that the reason was because my mother and father could not find the time to feed my sisters and me properly when they themselves were so busy, the former working all day, and the latter pretending to do the same, which is a lot of effort too. The fact is, though, that there were a few sustainable food items in our house. I remember a head of cabbage that once appeared in our kitchen. We gathered around it like it was a small meteorite that had landed out of the blue. My father had been on one of his kicks, such as his bread-baking kick, which resulted in a bunch of dense loaves wrapped in tinfoil, stacked like bricks on the counter. Or his Key lime pie kick, which resulted in a bunch of dense pie plates wrapped in tinfoil, stacked like hubcaps in the refrigerator.

This particular kick, the one with the cabbage, was a relish-making kick. He had purchased a used Cuisinart from the bankrupt restaurant next to his favorite bar and spent the next several days shredding vegetables and putting them into jars with vinegar and lemon juice. When we moved later that year, we left it all behind: the untouched jars with vegetables suspended in fluid like dead frogs in formaldehyde, the Cuisinart on the counter crusted with old cabbage and carrots, the tinfoil-wrapped remnants of past kicks. It was like the scene of a serial killing.

That was in California, where I was born. My father was from the South but never made it back here. Perhaps if he had eaten more vegetables rather than sealing them in jars, he would have. I did make it, though, and I called myself a vegetarian by then, because chocolate, cheese, and alcohol make a meatless diet after all. But some misunderstood me to mean that I actually ate vegetables, which is how I happened to end up with a plate of them in front of me one day. It was at the Inman Park art festival in the late 1990s, and I had somehow finagled a booth by convincing them I was an artist. Seeing that I was constrained by my responsibilities as “artist vendor,” a friend graciously brought me lunch. It was a container of hot food from Eats on Ponce de Leon. I had never been to Eats because they didn’t serve anything from my three food groups there, so I was reluctant to open the container. And when I did, my reluctance was confirmed. Inside were collard greens. My friend, another Southern mother, sensed my disappointment and insisted, “Eat it, it’s fresh!” I was starving and trapped, and unless I grabbed a funnel cake from a passing child, this was my only option. I took a bite.

I think it was at that precise moment when I went from being Southern Californian to Southern, period. To say the taste was merely delicious would dampen the impact of the moment. It was not merely delicious, it was stupendously delicious. It was transformative. It was so delicious, it was all I could do to keep from rising from my seat to address the crowd, like a singer in a corny musical.

It took years, but I finally learned to make collards myself, a process that entails about a day of labor if you do it right. And get this: My kid really likes them. She even brought other kids home to taste them. I was warmed by this. It made me think of my dad, how hard it must have been to be a Southerner raising a Californian, because here I was now, a Californian raising a Southerner. Any little sign that I’m succeeding is wrapped in rice paper and pressed in the pages of my heart. “Your friend may not like collard greens,” I told my girl that day. “She’ll like your collard greens,” she told me. Boom. It was at this moment, this precise moment, that I went from being the mother of a Southerner to being a Southern mother.

Illustration by Peter Arkle. This article originally appeared in the November 2012 issue.