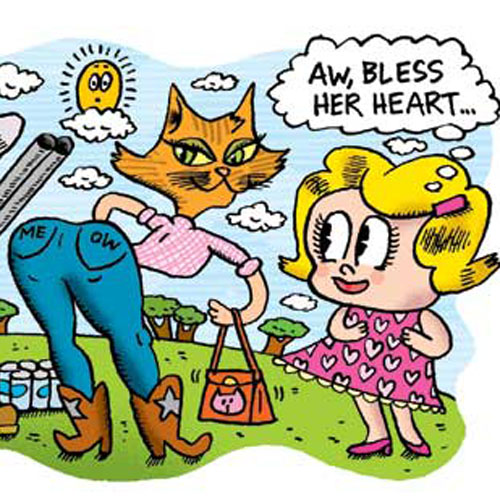 When Mitt Romney dropped a “bless his heart” on Barack Obama during a stump speech in Iowa, Southerners pricked up their ears like hunting dogs and commenced interpreting for anyone who might have missed the passive-aggressive implications.

If you spend time here, chances are your ticker has been “blessed,” for better or worse. The phrase—usually translated as “you’re dumb, homely, or otherwise impaired, but you can’t help it”—deserves a closer reading. Yes, it frequently gets deployed when we are waterboarding someone with sweet tea in a culture war, and to outside observers, it reinforces the mystique of unrelenting gentility and dubious sincerity. However, its usage has been somewhat distorted in the regional mythmaking, at the fence post where folksy meets fauxksy.

“That’s everybody’s favorite cutesy expression from the South, but you know it’s become overused if Massachusetts Republicans are throwing it around,” says Roy Blount Jr., Decatur-raised humorist and author of Alphabet Juice: The Energies, Gists, and Spirits of Letters, Words, and Combinations Thereof . . . With Examples of Their Usage Foul and Savory. “It’s like ‘good ole boy.’ That phrase used to mean a solid feller; you said it with warmth and respect. Then it became objectified into this crude, heavy-handed stereotype. I don’t say it anymore because it insults the subtlety of the South. And I’m really sick of ‘bless your heart.’”

At any fried chicken joint or “beauty parlor,” though, you still will overhear something like, “She put on weight, bless her heart.” However, in rural communities, “bless your heart” usually does not qualify a catty zinger; it still resonates as an expression of genuine sympathy, murmured with hugs and casseroles in funeral parlors. Think of it as a comforting reflex—namaste with a drawl.

No doubt people who say BYH without guile have been admonished to “be sweet” or “don’t act ugly” during a “hissy fit” or “conniption.” For most of my life, I assumed from empirical study that the difference between those outbursts somehow involved blood-alcohol content, but Zell Miller, former Georgia governor and a famously splenetic champion of Southern heritage, clarifies: “When something is done to you, you throw a conniption; when you don’t get your own way, you pitch a hissy fit.”

Of course, much depends on geography as well as context. What seems “quare” in the mountains might be praised as “the cat’s ass” farther south. “The thing about these expressions is that they are meant to be used in everyday discourse, not talked about and analyzed,” Blount says. So, is there a Southernism that will not make him madder than a wet hen? “‘What’ll ya have?’ at the Varsity,” he says. “It hasn’t caught on up North, and it signals a good chili dog.” Bless his heartburn.

Beyond BYH: A glossary of our favorite Southernisms

Grinning like a possum
Someone, usually a man, who is pleased with hisself. »“Earl grinned like a possum when he brought down that buck.”

I’ll swanee
A form of “I’ll swear!” that emphasizes the verity of a universal. »“I’ll swanee, these are hard times.”

The cat’s ass
The highest affirmation for the best of something, often associated with music. »“That banjo is the cat’s ass!”

Quare
Appalachian variant of queer, in the Elizabethan sense of odd, usually in an antisocial way. »“He didn’t speak to me at the store, but he’s always been quare like that.”

Illustration by Paul Corio. This article originally appeared in the November 2012 issue.