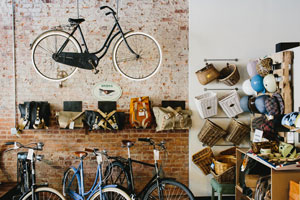 Jae Schmidt was looking for a more sophisticated way to pedal to his administration job at Emory’s medical school when he discovered the English bicycle brand Pashley. He eyed its solid, hand-built frames and curvy silhouettes and knew he’d found The One. “It represented what I thought a gentleman’s bicycle should be,” he says. The distributor required a minimum order of six bikes, but Schmidt figured he could sell the extras. The Pashleys turned out to be so popular that he placed another order. And another. Schmidt started selling bicycles out of a warehouse and a van when he wasn’t at Emory, but that “wasn’t a sustainable lifestyle.” So last year he opened his own shop, Houndstooth Road—eventually giving up his day job entirely.

Located in a storefront just off Decatur Square, the shop feels like a slice of Europe: rows of handcrafted bicycles from manufacturers like Pashley, Pilen, and Bobbin; exposed brick walls; Italian music spilling over from Sapori di Napoli pizzeria next door. Most of Schmidt’s customers are women, drawn to the cute city bikes with fenders, wicker baskets, and “ding-dong” bells.

Stylish cycling doesn’t come cheap—bikes range from $400 to $3,500, with the average European model starting at $1,000—but these beauties are built to last. “Most of these bicycles will be ridden by the purchasers’ grandchildren,” Schmidt says.

With a range of Brooks leather seats, colorful grips, and stainless steel parts, you can customize your ride right down to the wing nuts. And the accessories are just as fun: Modern, playful looks (reflective sequined vests, animal-print sashes) share space with more classic pieces (corduroy rain capes, waxed canvas saddlebags). A wooden pallet displays Yakkay helmets, which let you mix and match protective bases with covers like a confetti-colored bucket hat or a velvet army cap.

In the past year, Schmidt has seen an uptick in Atlanta’s bicycle culture. In February Atlanta approved $2.5 million for cycling improvements, and Schmidt credits the 2012 opening of the BeltLine’s Eastside Trail with spurring an interest in bike transit. He organized a “tweed ride” last fall—a jaunt around Decatur in tweed or vintage attire, a la traditional British cycling—in part to show riders that this method of commuting can be fun, safe, and comfortable. More than seventy people showed up last year, and Schmidt expects even more at the next ride in November. 316 Church Street, Decatur, 404-220-8957, facebook.com/hounds­toothroad