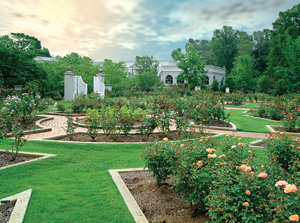 Birmingham is now quiet in the evenings, its downtown as emptied as our own. But a half century ago, civil rights marchers filled the streets, Bull Connor’s lackeys blasted students with fire hoses, and dynamite planted inside the Sixteenth Street Baptist Church added four more lives to “Bombingham’s” death tally. It was a city torn asunder—and everything our “city too busy to hate” worked to avoid.
Years later, Birmingham reversed course, opening the incredibly thorough Birmingham Civil Rights Institute across from Sixteenth Street in 1992. Its time lines, film clips, and artifacts from midcentury black businesses, boycotts, and sit-ins are well worth $12 and a few hours (especially this month, when the institute will host special Black History events). You can walk there easily from the Tutwiler Hotel, a newly renovated pre-WWI spot with polished-marble personality. On your way, stroll through Kelly Ingram Park, a boiling point of police brutality now interpreted through sculptures.
To understand the troubled race relations’ roots, wind south to Vulcan Park and Museum, which chronicles Birmingham’s 1871 birth as a mining town. The boom created an overnight “Magic City” of blue-collar whites and even-lower-paid blacks, who—with equal rights—would later become a payroll threat. Climb to the base of the Vulcan, the world’s largest cast-iron statue, for an orienting view. To the east, Sloss Furnaces’ now dormant smokestacks pierce the panorama. Stop by for a free self-guided tour of the rusting National Historic Landmark, left just as it was when stove tenders and boilermakers left it for good decades ago.
Vulcan’s cascading lawn is perfect for a picnic, perhaps with a sandwich on hearth-baked bread from Continental Bakery in Tudor-inspired Mountain Brook, just a few miles southeast of downtown. (And don’t miss a crepe-filled Sunday brunch at its sister spot next door, Chez Lulu.) In fact, Birmingham’s magic, like ours, now lies in its historic neighborhoods, and Mountain Brook also hosts the Birmingham Zoo and peaceful (free!) Birmingham Botanical Gardens.
If you’ve roamed the 145 miles to Birmingham in anything bigger than a Mini Cooper, you’ll be tempted to bring back a tufted sofa or hickory rocker from At Home or Seibels, two of many decor shops in Homewood, a Va-Hi-esque burb south of Vulcan Park.
Head to the Five Points South district for dinner. A plate of perfectly crusted, Gulf-fresh red snapper can induce sighs of happiness at Highlands Bar and Grill, beloved chef and James Beard award winner Frank Stitt’s ever-packed flagship. Watch pirouetting chefs braise beef cheeks and roast ducks up the street in Hot and Hot Fish Club’s open kitchen, helmed by Beard nominee Chris Hastings and wife Idie. For the smoked stuff, Tuscaloosa’s Dreamland outpost is nearby, as is Full Moon Bar-B-Que’s sliced pork and chowchow. Waddle home to Cobb Lane Bed and Breakfast, an 1898 Victorian with a parlor stocked with fresh-baked goodies.
Good eats abound everywhere; even the Bottletree Cafe—one of B’ham’s best live-music spots—is worshipped for its vegan chili. It might have less character than the Bottletree, but the Birmingham-Jefferson Convention Complex pulls in bigger acts, including Bill Cosby and Gladys Knight this month. But the best performance may be back at Sixteenth Street Baptist. Believers and skeptics alike flock to hear the resilient church’s gospel choir lift their voices every Sunday.
Photograph courtesy of Birmingham Botanical Gardens
Advertisement