In Barbara Rothbaum’s office, military veterans relive the worst moments of their lives. They strap on virtual reality headsets and watch fellow soldiers die from roadside bombs in Iraq or get gunned down in Afghanistan. They feel explosions from speakers under their raised seat and even smell the sweat of combatants and the acrid smoke of gunpowder.

“It’s a multi-sensory experience. We want them to feel these memories over and over and wear it out,” says Rothbaum, fifty-six, an Emory University clinical psychologist who has pioneered the use of virtual reality to treat post-traumatic stress disorder (PTSD).

Many veterans initially resist treatment, thinking they can get over painful combat memories on their own. But according to Rothbaum—as well as numerous outside studies—using exposure therapy to revisit traumatic wartime episodes eventually allows them to move on with their lives. “The haunting nature of PTSD comes out in these treatments,” she says. “We’re able to treat the invisible wounds of war for post-9/11 veterans.”

Emory is one of just four sites in the nation to use this technique, thanks to a $15 million grant from the Wounded Warrior Foundation. The three-year grant, which Rothbaum helped secure in 2015, offers treatment free of charge and will likely be extended another five years.

Rothbaum began working in the PTSD field in 1986, just six years after the condition was first officially identified. She helped develop protocols and treatments, and later worked with colleagues at Georgia Tech to design a patented PTSD virtual reality device.

Treating such an intense disorder can drain both therapist and subject. Rothbaum relaxes with yoga and cycling, but acknowledges she works long hours. Still, she says the payoff is worth it: “I’ve seen it help so many people. I think to myself, ‘How can someone ever get over this?’ But they do.” 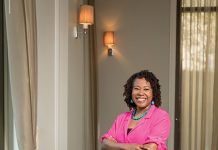