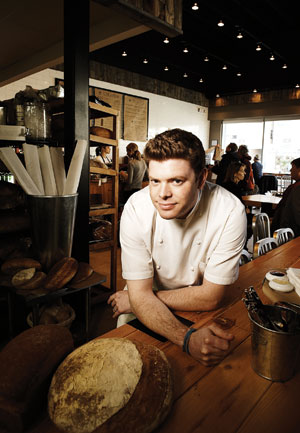 If I could eat only one thing for the rest of my life, it would be bread—freshly baked, crusty, yeasty bread. I firmly believe Atlanta doesn’t have nearly as many bakeries or artisan bakers as it merits, and I resent every extra mile I drive looking for an acceptable baguette or well-shaped boule.
Recently, my quest for quality bread has led me straight to Bakeshop, Jonathan St. Hilaire’s new Midtown haunt. Before he started making bread for Bob Amick’s local restaurant group, Concentrics Hospitality, I always thought of St. Hilaire as a tony executive pastry chef rather than a baker. A New Englander with the rugged good looks of a Maine lobsterman turned sweater model, St. Hilaire played semipro soccer before attending the French Culinary Institute in New York. After graduating, he worked as a pastry chef in North Carolina, eventually seeking his fortune in Atlanta, where he emerged as a major talent creating dramatic desserts at the now defunct Spice in Midtown.

“So,” I asked him recently while we stood in front of Bakeshop’s counter, “are you a boulanger or a pâtissier?” Although a few individuals are equally attracted to bread, pastries, and cakes, most career bakers specialize early on. “Bread is what I like to do; I love the simplicity of it,” St. Hilaire answered. Together we bent over fat ringed books of recipes he’s assembled over the years, discussing the fine points of couronne (a bread shaped like a crown) and épi (a baguette spiked like a sheaf of wheat).

To make his basic bread recipe, St. Hilaire uses a carefully nurtured sourdough starter, originally based on organic grapes, tied up in cheesecloth. He goes through pallets of unbleached flour and, in some cases, instead of kneading the bread with plain water, he soaks Granny Smith apples, grinding them after a short fermentation to add a bit of sweetness to the dough and intensify the crumb. “I don’t like airy bread,” he told me, a point on which I agree wholeheartedly. My favorite thing at Bakeshop is the bacon baguette studded with tender, oinky chunks of cured pork. My allegiance goes next to the croissants, which St. Hilaire makes personally on a machine that resembles a laundry press.

I don’t care much for the big, rough cookies I have bought at Bakeshop, but I am quite impressed with the danishes, the stuffed croissants, and the adorable little cakes assembled or baked in tiny Mason jars. (The latter are quite the alternative to typical footstool-sized cakes that, when sold by the slice, lose their freshness by the hour.)

While it already functions as a neighborhood bakery luring Midtown residents, Bakeshop also has a steady wholesale business that supplies, among others, the Four Seasons, the Hotel Palomar, Craft, and Parish with anything from challah to breadsticks. It is also a cafe where delicious sandwiches are served on sleek butcher-block tables. St. Hilaire brings his culinary background into play, offering fun goat cheese pissaladières shaped like thin individual pizzas and baking juicy bratwurst inside a sleeve of baguette.

There is a bullhorn hanging near the kitchen, and a pink sign reminds everyone to keep calm. On the whole, though, the open kitchen looks harmonious and composed and produces a minimum of noise. Bakeshop is a great place to hang out with a newspaper and a cupcake while watching others do their work.