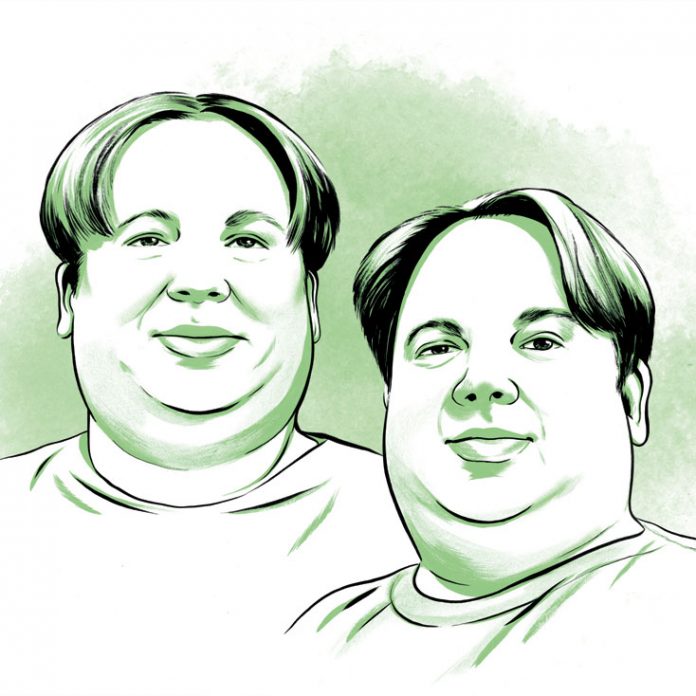 Justin and Jonathan Fox, the identical twins who run Fox Bros. BBQ and Big Tex, were born within three minutes of each other in San Antonio on March 2—Texas Independence Day. As teenagers, both worked their first jobs at Six Flags Over Texas, where Justin made funnel cakes and Jonathan worked at a lemonade stand. When they moved to Georgia, they missed fair food but longed more for the beef barbecue of their home state. In 2001 the brothers began hosting annual blowout barbecue parties at their house, and in 2003, encouraged by their friends’ praise (and the lack of decent ’cue in Atlanta at the time), they began catering and approached Smith’s Olde Bar in Midtown about selling barbecue on Wednesday nights. Their smoky brisket, ribs, and pulled pork wowed concertgoers, and their one-night-a-week gig expanded to weekends as well. In 2007 the owners of Smith’s helped the Fox boys open their own barbecue joint, and the crowds have never let up.

“Not only do we work together, but we live together too,” says Justin. Don’t they get tired of one another? “Brothers like to bicker, and I think we have perfected it,” he concedes. They’ve maintained some independence by claiming different parts of the menu: Jonathan develops most of the barbecue recipes, sauces, and rubs; Justin devises frequent dessert specials. he Fox twins are the most famous brothers in the Atlanta dining scene, but they’re hardly the only siblings collaborating in the food world. Some pair up to sell artisan products: Nick Carse, for example, joined his brother, King of Pops founder Steven Carse, after the frozen treats business grew too rapidly for one person to handle. Others work for powerhouse family companies: Pano I. Karatassos is the corporate executive chef of his father’s empire, the Buckhead Life Restaurant Group, while his brother, Niko Karatassos, is the director of operations. In most cases though, “bro-and-bro” is the new “mom-and-pop,” with siblings uniting to run successful neighborhood independents. When I asked several sets of brothers why they chose to work together (in a notoriously volatile field, no less), I heard variations of the same argument over and over: Trust in family outweighs irritation, petty conflicts, and the need to compete.

Gilbert and Sean Yeremyan—partners in Mediterranean-themed Gilbert’s Cafe & Bar, all-American Hobnob Neighborhood Tavern, and the new 10th & Piedmont restaurant in the former Outwrite Bookstore—decided to pursue joint careers in hospitality even before immigrating to the United States (they came over on the same flight) in 1997. Raised in Istanbul by Armenian parents, the Yeremyans share enough of a resemblance that customers routinely address them by the wrong name. Sean oversees the front of the house and describes himself as “the social one,” while younger, more reserved Gilbert takes charge of the kitchens. “We may occasionally take each other for granted, but our different personalities work to our advantage,” Sean says. “Together we make one perfect restaurant owner.” When I first met Michael and Peter Jakob, who operate the tiny dive bar and sandwich shop Elliott Street Deli & Pub in Castleberry Hill, they labored in such close confines that I remember wondering how these two burly dudes could stand the lack of personal space. They’ve worked together since they were kids—clamming in Long Island, building concrete patio accessories with their disabled father, and starting their own construction company specializing in bars, nightclubs, and restaurants. They live upstairs from their business and share responsibility for repairing and maintaining the creaky nineteenth-century building. When they quibble, they “never try to hit the face or leave any permanent damage,” jokes Michael, and at the end of most days they sit down together peacefully to share a smoke.

Atlanta’s booming pizza business is apparently a natural environment for entrepreneurial brothers. Hugh and Jason Connerty launched Ammazza in the Old Fourth Ward last September, after consulting on franchise possibilities with Giovanni Di Palma of Antico Pizza Napoletana. (There’s a familial connection at Antico too: One of Di Palma’s brothers, Giuseppe, is overseeing the construction of a gelateria and bar near the pizzeria.) Hugh Connerty drew on his background as a business analyst to attract investors; Jason worked previously as a managing partner of the Cumberland outpost of Carrabba’s Italian Grill and as a sous chef at defunct Roy’s in Buckhead. (Their father, Hugh Connerty Jr., was a past president of Outback Steakhouse International.) True to his corporate credentials, Hugh says of Ammazza, “This is a business, not a sibling relationship.” Family played a much more vital role when Naples-born Daniele and Ambrogio Florio decided to open Sapori di Napoli in Decatur in 2011. Daniele’s American-born wife has relatives who live in the area, and she wanted to be closer to them. The Florios, who grew up working in their uncle’s pizzeria in Italy, always wanted to start their own business. When they saw that Decatur didn’t yet have a Neapolitan-style pizzeria, their decision was simple.

If the idea of running a restaurant with one brother sounds challenging, imagine having five involved. Thompson Brothers BBQ in Smyrna, opened in 2004, was conceived as a project to maintain family ties after the father of David, Horace, Carroll, Joseph, and Nathan passed away in their native Oklahoma. They thought the state’s style of highly seasoned barbecue, sauce always on the side, would stand out in Atlanta. Carroll and a cousin, Corey Stephens, run the restaurant day to day; three brothers live outside the state. The others may offer firm opinions about operations and approaches to customer service, but, Carroll says, “I told them, ‘Unless you’re in the restaurant putting in twenty hours a week, then your suggestion is just a suggestion.’” Brotherly love, it seems, can only go so far in the food industry.

Illustrations by Joel Kimmel. This article originally appeared in our February 2013 issue.