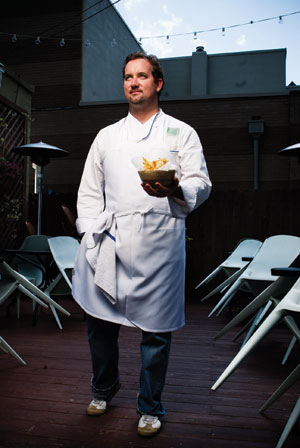 As funny as it is to hear a youthful forty-year-old describe himself as “a product of an earlier era,” I knew exactly what chef Shaun Doty, the owner of Shaun’s in Inman Park, was trying to communicate when we sat down for a chat at Aurora Coffee in Little Five Points. I thought he would be mad at me for starting the conversation by calling him “the king of french fries.” Au contraire! He reminded me that, although he grew up in Oklahoma, he had lived in Belgium, where frying potatoes is an art form, and that he had once been married to a Belgian woman.

There is nothing easy about making french fries. I remember being at Joël Robuchon’s famous L’Atelier in Paris and watching the master send the same line cook crying back to the kitchen six times in a row until he finally gave his approval to a simple plate of golden fries. Doty’s pommes frites graisse de canard are as good as any I have had in my life. “It takes a hundred dollars to fill the fryer [with duck fat],” he told me, bragging that he could make them in the restaurant and still deliver them crisp to me half an hour later. He is particular about his spuds (Kingston Idaho) and his technique (two dips into the hot fat), and it is “as serious a business as making a terrine.”

The menu at Shaun’s, a compendium of wide-ranging, educated bistro dishes, is right up my alley. The fettuccine with chicken livers, the Sardinian flatbread with wild arugula and argan oil, and, more recently, the incredible pork schnitzel with grilled Vidalia onion salad, peanuts, and parsley have cast a spell on me. The brunch, now available on Saturdays as well as Sundays, is one of perhaps two in town I consider getting up for: I am a huge fan of the cheddar waffles with poached kumquats and a new pure cane syrup less sticky than maple.

Because of the level of creativity, I consider the early-bird special ($29 per person for three courses, available from 5 to 7 p.m. and all evening at the bar) a better deal than the Sunday pasta dinner ($12 with salad and homemade gelato), which draws folks who don’t necessarily know what the restaurant is otherwise capable of.

I have had my eye on Doty for many years, first when he was chef Guenter Seeger’s right hand at The Dining Room at The Ritz-Carlton, Buckhead, then as the co-owner of several flashy operations that ultimately closed. “Patience,” I have always thought. “He will be great some day.”

When he opened Shaun’s in October 2006, Doty finally shed the mantle of the protégé. Now that his famous mentor and friend has left town, no one calls him “Little Guenter” anymore. He has made a cocoon for himself in a place that feels like an extension of his culinary personality and socializing habits. A wild card no longer, he credits his young son, Dante, who has been diagnosed with autism, for forcing courage upon him.

I am a big proponent of restaurants (and businesses in general) where the owner puts his or her name above the door. I trust Shaun’s implicitly, and I know that it takes a brave man to stake his reputation on chopped liver—a signature dish Doty describes as “a perfect representation of what I do”—and glorious french fries.