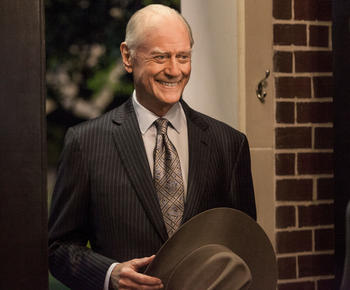 The Ewings descend on an el cheapo hotel south of the border in the opening moments of tonight’s tribute to Larry Hagman on TNT’s Dallas at9 p.m. Oil man patriarch J.R. Ewing was supposed to be in Abu Dhabi cutting a business deal. So why is his bullet-riddled body in a Mexican morgue?

Tonight’s episode of the successful primetime soap reboot honors Hagman’s indelible TV character even as it sets in motion a fresh mystery and plot twists worthy of J.R. himself.

And that’s just the way Hagman would have wanted things at Southfork, say Dallas executive producer Cynthia Cidre (who also wrote tonight’s emotional episode titled “J.R.’s Masterpiece”) and director Michael M. Robin. Last fall, the cast and crew were five episodes into shooting the show’s second season when Hagman unexpectedly succumbed to cancer. “It’s been a challenge but we loved doing this for Larry,” explained Cidre during a conference call with Robin and me. Added Robin: “This is nothing either of us has ever had to face before. We lost the number-one person on our call sheet and a historical figure in the history of television and a friend.”

Over Thanksgiving weekend, Dallas writers and producers scrambled to rework plotlines involving J.R. and Cidre wrote tonight’s guest star-packed funeral episode on the fly. At no point, says Cidre, did Hagman pull her aside and inform her of his waning health. “No, never,” she says. He just showed up on set in Dallas and did his job each day. “We did go into a slight panic,” she says. “But I didn’t want to completely tear up season two because I thought it was good and we had already set it up. But we had to come up with something worthy of both J.R. and Larry for his demise on screen and then try to reintegrate as much as possible the existing content for our second season. We ended up keeping about 80 percent but it was all hands on deck for sure.”

For tonight’s funeral episode, Cidre and Robin had to write and direct a cast and crew who had already been through the emotional ringer of attending real-life memorials for Hagman. “The whole company went through this together,” said Robin. “We knew this episode was coming up and that we had to do it. But we kind of remained in touch with Larry throughout all of this whole process. We hadn’t said goodbye. This was actually a very helpful episode to do because it helped us to say goodbye to him.”

And if there was a special Emmy handed out for TV trickery, Cidre and Robin would surely win it hands down for how Dallas managed to give J.R. and Hagman a memorable swan song scene in last week’s episode as he placed a a final phone call to his equally scheming son John Ross. At the end, J.R. catches someone entering his hotel room and John Ross hears a series of gunshots and then silence.

“We had Larry photographed through show five of this season but we knew we had story needs for J.R. through show seven,” explains Robin. “So we went back through and said, ‘What footage do we have of Larry?’ What footage have we not used?'”

Adds Cidre: “We literally wrote the scenes backwards based on the dialogue we had from Larry.” Explains Robin: “Our editor actually used footage of J.R. in a scene that took place in J.R.’s room at Southfork. We Rotoscoped [isolated foreground elements from their backgrounds] Larry out of Southfork and we sampled the walls from the set where he was shot and put those walls into the place of Southfork.”

“We were very lucky,” says Cidre. “Larry left us enough odds and ends to give us enough footage to work with. There was a season one scene in a limo that was generic enough for us to work with too. We were able to write the other half of the phone conversation to make it work. We were kicking ourselves that we didn’t do more of those ‘Larry in a limo’ scenes. We could have kept J.R. going through several more seasons!”

Now that Hagman’s scenes have all aired, Dallas will keep J.R.’s legacy alive via all the fires the TV villain set for family and foes following his mysterious Mexican death. Cidre says the TV template was set 30 years ago, as original “Dallas” patriarch Jock Ewing continued to reign over the clan following actor Jim Davis’ death during the shooting of season four.
“This is not unlike Jock in Dallas 1.0,” says Cidre. “Even after he passed away, the character of Jock loomed large in the lives of the Ewings for the remaining 13 years the show was on the air. J.R.’s legacy will be present for as long as this Dallas continues as well.”