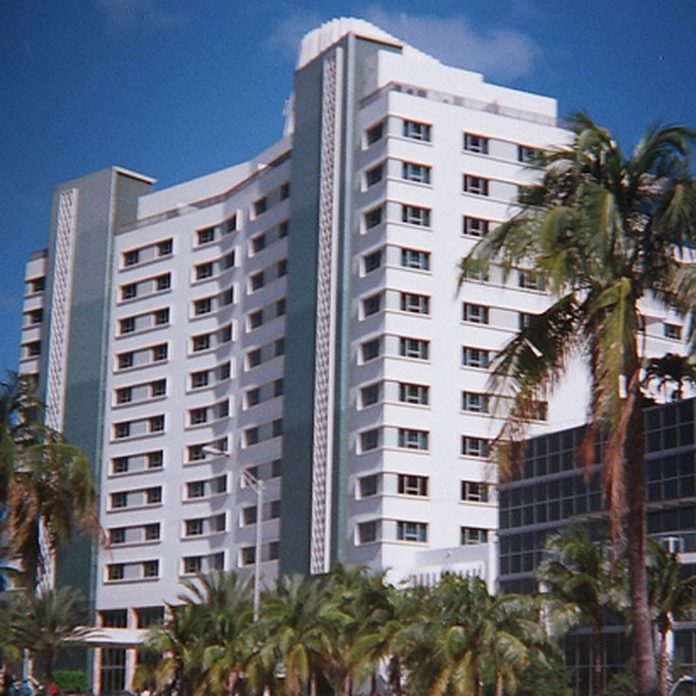 No place sets the mood for Miami Beach’s retro flamboyance quite like the lobby of the Eden Roc Renaissance hotel. Massive rosewood columns form a circle in the center of the enormous room, creating an amphitheater effect that conjures the decadence of ancient Rome. Above is a gold-trimmed drop ceiling, its silhouette reminiscent of the exotic anthuriums that inspired hotel architect Morris Lapidus. The round bar beneath, enshrouded in gauzy curtains when the Florida sun floods in too intensely, is surrounded by white leather banquettes and chrome floor lamps topped with hot-pink lampshades. The extravagance draws me like a vortex: I want to abandon my luggage, leave behind my bourbon-drinking ways, and start two-fisting Mojitos and Technicolor daiquiris.

This lobby was Lapidus’s magnum opus. The architect, who famously said, “Too much is never enough,” was behind the outré buildings that came to define Miami Beach as a glamorous adult playground in the mid-twentieth century. When Eden Roc opened in 1956, visitors lingered in the lobby to glimpse celebrity frequenters like Elizabeth Taylor, Lucille Ball, and Nat King Cole. Last year Marriott completed a $230 million makeover and relaunched the hotel. The renovation included a new twenty-one-story tower that bumped the number of rooms from 349 to 631. For the most spectacular views, book corner suites—particularly rooms that end in 51 in the new annex and 01 in the original structure, which staffers call the “legendary tower.” From those balconies you can gaze without obstruction at both a teal stretch of Atlantic Ocean and, just across busy Collins Avenue, the mansions and yachts dotting the Intracoastal Waterway.

Any of the hotel’s erudite concierges can arrange sailing outings or Jet Ski rentals for restless guests, but the property encourages sedentary pleasures. There’s the sparkly, crowded beach, of course, and a sprawling deck with four dramatic pools, including a shallow option for kids and an adults-only haven on an upper tier. In an unusual collaboration, Elle magazine partnered with the hotel to create the first Elle Spa, which opened in June 2011. The 22,000-square-foot space lulls you into dallying, with whirlpools, cold plunges, saunas, and daybeds for napping. The magazine’s influence shows up mainly in the brochure’s chipper prose, such as verbiage describing a men’s facial: “At Elle, we believe in cute, smart guys who make us laugh—and make an effort!” Right.

I don’t feel like putting much effort into plotting dinner, so I head to the hotel’s restaurant, 1500 Degrees, which marries two trends: chef-driven steakhouses (the head toque is Hell’s Kitchen finalist Paula DaSilva) and farm-to-table dining, still a fledgling idea in South Florida. Sides like spicy grilled corn and creamed spinach complement a wagyu ribeye, and local fish entrees like grouper over black lentils entice those who prefer to eat down the food chain.

Eden Roc coddles you in an elegant, eccentric cocoon, but eventually the glitz and sizzle of Miami Beach beckon. The hotel is right in the center of the island city, in a section nicknamed the “golden mile.” Head five miles north up Collins Avenue to reach Bal Harbour Shops, one of the toniest malls in the country. Ogle the season’s finest from Prada, Marc Jacobs, Alexander McQueen, and nearly ninety other top-of-the-line designers, then stop for a lunchtime caprese salad at Carpaccio, the best of the mall’s restaurants.

A few miles in the other direction lands you among the sweaty throngs of South Beach. The art deco district fell into neglect after World War II, but gentrification in the 1980s (spurred partly by Miami Vice) fueled its current status as an international party destination. Revelers can brave the velvet ropes at Mansion, one of SoBe’s most raucous nightclubs, housed in a 1930s movie theater. More restrained souls may prefer  a performance at the Frank Gehry– designed New World Center concert  hall. This month look for a centennial celebration of American composer John Cage (February 8 to 10).