Home Uncategorized Over $1000: The Inn at Palmetto Bluff 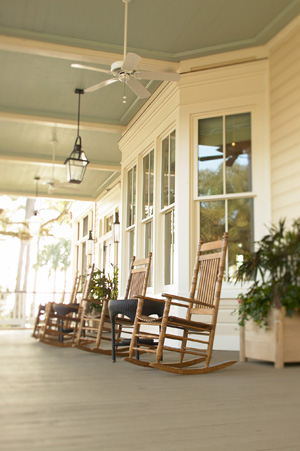 After a few days at Palmetto Bluff, you’re likely to spend the four-and-a-half-hour drive home trying to reconcile some conflicting thoughts. On the one hand, you’ll be grateful that such a profoundly gorgeous piece of real estate—22,000 acres of the South Carolina Lowcountry on the banks of the May River—is being cared for so lovingly by its owners.
Sure, those owners are developers, but they’re smart enough to know that any development will fail if its chief selling point—the place’s innate beauty—is sacrificed for profit. Which is why a third of the acreage is off-limits to builders. About half of the existing 170 homes are clustered near the village square, where ancient oaks overlook the river, while the rest are tucked away on private roads, secluded pockets of baronial splendor. In an age when the phrase “planned community” evokes images of architectural monotony and tacky homages to a past that never existed, Palmetto Bluff is the rare and refreshing exception.
It is also an expensive exception, which is where your other thought comes in. Home prices here start at more than $1 million. Initiation at the golf club, a Jack Nicklaus design so intent on not interrupting the natural setting that there are only three trash bins on the whole course, is $75,000. Fortunately, you don’t have to live at Palmetto Bluff to experience life here. Auberge, the luxury hotel chain, operates the Inn at Palmetto Bluff, a compact and luxurious resort that serves as both a quiet retreat and advertisement to those with the means to build here.
My wife and I (and seven-month-old son) spent a weekend here in August. When I made reservations, the helpful agent explained that the fifty cottages overlook either the May River or a lagoon. We chose the latter, but thanks to the lush vegetation, we couldn’t really see the lagoon from our screened-in back porch. (We did enjoy watching an armadillo poke around near our back steps before waddling off toward the water.) If I go back, I’ll pay the extra $100 a night for a river cottage, if only to see the sun rise over the May River.
Vaulted ceilings make the spacious cottages seem even bigger. The floors are pine planks, polished to a slippery sheen. A fireplace ignites at the flip of a switch. The bathroom features Perrin & Rowe fixtures and a combination steam and shower—a soothing indulgence even if you don’t make it to the inn’s full-service spa, where you can bathe on a private outdoor veranda.
My only real complaint was that our plasma TV was not high-def. Then again, you don’t come here to watch television, especially when there are croquet lessons one day, tennis clinics another, and porching every day. (Porching, I discovered, is the fine art of sipping a cocktail—I recommend the blackberry-sage lemonade or the cucumber spritzer—on the inn’s wraparound porch.) Of course, you could also choose the bar near the heated pool, where you can swim 100-foot laps in one of its three lanes. From the lounge chairs you can watch egrets soar over the lagoon toward the wide river, where the tides expose sandbars and where dolphins surface magically as they make their way back to sea. You can also hop aboard the Grace, a restored century-old yacht with mahogany paneling, and Captain George York will pilot you past the party boats near the sandbar. Their occupants will wave, but the ibis and herons will ignore you. On our Saturday afternoon cruise were three other couples: vacationers from Nova Scotia, a member of the Spanish parliament and his companion, and a young executive from Goldman Sachs and his wife, who were building a house in Palmetto Bluff.
Earlier that morning I’d played a round at the May River Golf Club, a track that, like everything else about Palmetto Bluff, was designed to accommodate nature, not the other way around. The beautifully illustrated yardage book also served as a nature guide, explaining, for instance, that the inlet of water running along the seventh hole—a short dogleg left, with a green bordered by marsh grasses—was called “Greenleaf slough.” Courses that accommodate so much old growth are sometimes the toughest to play, but the May River club has vast fairways and big, slick greens. You can score here.
That night we dined at the River House restaurant, a swank space in the main house. Classic entrees—such as beef tenderloin or Maine lobster with house-made pasta, May River shrimp, and Sapelo Island clams—average around $35. More casual options are Buffalo’s on the square or the Canoe Club fitness center. For a final treat, grab graham crackers, marshmallows, and chocolate from jars near the inn’s front door and roast s’mores around a fire pit, a nightly tradition.
Travelers Notebook
LODGING AND DINING
The Inn at Palmetto Bluff
476 Mount Pelia Road
Bluffton, SC
866-706-6565
palmettobluffresort.com
Room rates from $475 nightly
COMMUNITY
Palmetto Bluff
800-501-7405
palmetto-bluff.com

Photos courtesy of the Inn at Palmetto Bluff
Advertisement