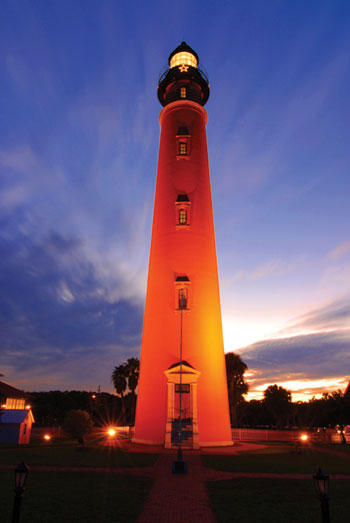 The oceanfront home of America’s space program stretches more than 70 miles along Florida’s Atlantic coast, from Titusville to south of Melbourne. White sand and ripping surf will always draw beach bums and sun lovers, but an era of spaceflight ends this year. The last two space shuttle launches ever are slated for September and November. Go ready for crowds.

STAY
Titusville has motels galore, but Cocoa Beach’s lodgings are closer to shopping and nightlife. Ron Jon Cape Caribe Resort, named for the world’s largest surf shop a few miles down highway A1A, offers condo-style studios and bedrooms with full kitchens. With a pool, waterslide, lazy river, restaurant, spa, and private access to the beach and nearby Jetty Park (a prime spot to watch a launch), the amenities may tempt you to ignore the rest of the coast. The Inn at Cocoa Beach caters to couples, with romantic balconies, parrot mascots, a beachside private courtyard, and an evening wine and cheese service. In Melbourne, soak up the laid-back atmosphere at a local B&B such as the waterfront Crane Creek Inn, only a two-minute walk from the quaint historic district’s shops and restaurants.

EAT
Watch the launch or celebrate afterward above the surf at the Cocoa Beach Pier’s Mai Tiki Bar, 800 feet out at the boardwalk’s end. At the pier’s 500-foot mark, watch the tide roll beneath you while dining on fresh seafood and tangy Key lime pie at Atlantic Ocean Grille. Later, dance on the beachside deck of Coconuts, the go-to nightspot. Pop into the Pig and Whistle pub (240 North Orlando Avenue, Cocoa Beach, 321-799-0724) for hearty British fare, including the sometimes-on-Friday lobster potpie (call ahead to check). Less-touristy Melbourne lights up its historic district once a month for Friday Fest. Start with a steak and live jazz at the Firehouse, then stroll the shops or join the street party—drum circles and belly dancing may occur.

DO
Anywhere along U.S. 1 in Titusville is prime viewing for a shuttle launch, but the best—unless you have a NASA pass—is Space View Park (Broad Street at the Indian River), less than 15 miles from the shuttle launchpads and one of the few locations that track the countdown and have public restrooms. A short trip south is the Kennedy Space Center’s Astronaut Hall of Fame, with inspiring artifacts such as Gus Grissom’s Mercury space suit and Wally Schirra’s Sigma 7 capsule. The same KSC ticket gets you a second day’s visit, so take a bus tour to the shuttle launch observation gantry and the massive indoor Saturn V exhibit. To really appreciate the beauty of the coast, head north just off the Space Coast map to Ponce Inlet and climb the 203 steps to the top of the tallest lighthouse in Florida.

Discover it All – Foo Foo in the Fall