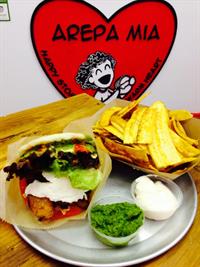 Arepa Mia, the Venezuelan arepa shop at the Sweet Auburn Curb Market, is expanding to Decatur. Owner and chef Lisbet Hernandez is taking over a catering space at 307 East College Avenue and turning it into a second Arepa Mia where she’ll offer the same menu of gluten-free chicken, fish, ham, and beef arepas, empanadas, and cachapas (Venezuelan corn cakes), along with new weekend specials and Sunday brunch.

“Arepas are the number one thing in every Venezuelan home,” Hernandez says. “But the other dishes are fantastic, too.”

For these specials, she’ll look to different regions of her home country for influence. She’ll have fish dishes from the coast, roasts from the South, a Venezuelan hot dog, and more. On Sundays, breakfast arepas and empanadas, as well as egg dishes, will be available.

“It’ll definitely be different from biscuits and gravy,” she says. “Everyone knows corn and eggs; it’s just the way it’s done [that’s different].”

Arepa Mia began at the Atlanta Underground Market in 2011, but Hernandez didn’t open a permanent shop until 2012. At the Sweet Auburn Curb Market, business is centered on lunchtime; in Decatur, Arepa Mia will only be open for dinner and Sunday brunch—at least at first.

The approximately thirty-seat space will be decorated similarly to the original Arepa Mia with bright colors (particularly red and white) and artisan Venezuelan crafts.