Home Uncategorized The best beer and wine pairings for your favorite football snacks, according...

Football season is in full swing and chances are your team has already broken your heart (multiple times). Despite the ups and downs that come with cheering for our teams, we can always rely on the delicious food served at tailgates or game-day parties. (Because your team’s embarrassing loss doesn’t seem so bad when you’re plowing into a warm bowl of buffalo chicken dip.)

If you’ve been washing your snacks down with watery beer, stop. You can get even more enjoyment out of those greasy, fatty treats, and make those flavors sing with the help of a properly paired wine or beer. We chatted with Perrine Prieur Gallardo, founder of Perrine’s Wine Shop in West Midtown, and Kraig Torres, owner of Hop City Craft Beer and Wine, about which beverages go best with our favorite game day snacks.

Cheese Nachos
Beer: Thanks to the cheesiness of nachos, Torres suggests pairing them with a New England-style IPA because of its fruitiness. Wild Leap Brew Co.’s Alpha Abstraction fits the bill described by Torres as an “absolute fruit bowl of flavor.”

Wine: Prieur likes a wine that’s high in acid with a bit of salinity to pair with the nachos’ saltiness. Consider the 2017 Gaintza Txakolina from the northern part of Spain.

Jalapeño Poppers
Beer: To cut through the jalapeño’s heat Torres pairs poppers with a classic IPA, like Bell’s Two Hearted. “It’s one of those classic, razor sharp, cut through your spikiness kind of IPA.”

Wine: With anything fried Prieur suggests cutting the fat with something fresh, acidic, and fruity. In this case the NV Zingara Prosecco fits the bill.

Buffalo Chicken Dip
Beer: The spiciness of buffalo chicken dip calls for a simple, easy beer like a pilsner. Torres suggests a Pilsner Urquell which comes in a 16-ounce can—perfect for tailgating. “It’s really well put together, with enough bitterness to cut through the cream cheese of your chicken dip. It is also just really clean and a little bit earthy, with maybe even a little bit of white pepper on the tail end.”

Wine: Don’t pair an oaky wine with this snack. Stick to something like the 2017 Castello di Ama, a rosé. “It’s not sweet at all. It just has the crushed fruit on the nose. A little whiter, which I think will go well with that buffalo smell,” says Prieur.

Guacamole
Beer: Guacamole is zesty and a little bit salty which is why Torres suggests pairing it with a saison. He says, “Quest Brewing just came out with a beer called Ponce. It is a cucumber, jalapeño saison. So picture those three flavors combined with the avocado in the guacamole; it’s just a perfect combination.”

Wine: Assuming you don’t like your guacamole too spicy, Prieur suggests the 2017 Avinyo Petillant. Its fizziness plays nicely with the avocado and citrusy flavor notes.

Pepperoni Pizza
Beer: So as not to compete with the spiciness of the pepperoni, Torres suggest a golden ale like Monday Night Brewing’s I’m on a Boat. “It has some hoppy characteristics, some spiciness to it, but it also has a nice pleasant dryness. You need something that doesn’t step on your spiciness of your pizza and that will also cut through the oils of your pizza.”

Wine: Similarly, Prieur likes pairing a dolcetto (which translates to “little sweet grape”) with the spicy pizza. The 2017 Cantine Povero Dolcetto, a red, is little bit sweet and herbal, and pairs perfectly with the pepperoni.

Ribs
Beer: Ribs, like most barbecued meats, call for something not too heavy. Torres likes a pilsner, but one that’s a bit more interesting like Moody Tongue’s Applewood gold pilsner. It’s smoky and light, making it an excellent choice to pair with grilled foods, he says.

Wine: Playing off the fattiness of the ribs, Prieur suggests a 2015 Giovanni Rosso, Nebbiolo, an easy drinker with hints of cherry and raspberry.

Lemon Pepper Chicken Wings
Beer: Rather than a beer for zesty lemon pepper wings, Torres suggests a dry cider like Bold Rock’s dry cider. The wings already pack a citrusy, spicy punch, and the cider rounds out those flavors.

Wine: Prieur loves a sparkling wine with chicken wings and for lemon pepper, she suggests a cava. The 2016 Naverran Cava Perles d’Or is a tinge lemony which plays nicely with these wings.

Beef Chili
Beer: Assuming you make your chili with tomatoes and pinto beans, Torres like a seasonal porter such as Gate City’s Gourd Vibrations. “Picture the caramelized onions, picture some of that cumin and paprika, and then add a layer of chocolate and pumpkin, and you have something that is both seasonally-driven and delicious.”

Wine: Chili calls for a jammy, fruity red wine. Prieur likes the 2016 Dashe’s “Les Enfants Terribles” which is also bold and warm without being too heavy.

Pretzels and Cheese Dip
Beer: Pretzels are a blank yet salty slate, making them easy to pair with aggressive beers like sours. “Orpheus Brewing just came out with an amazing new apricot sour called The Fruits of Pomona. So apricot and cheese, apricot and salt, apricot and bready-ness—all of that will work,” says Torres.

Wine: Prieur laughs as she says, “I guess you’re going to think that I gave you too many sparkling wines, but it’s just what goes with cheese!” So for this snack Prieur, likes a 2017 Frantz Salmon La Petite Gaule du Matin, which she describes as effervescent, floral, and refreshing.

Sliders
Beer: Mini hamburgers call for a classic brown ale. Although Torres feels that this style has died in popularity, he notes that they are still classic and have been around hundreds of years for a reason. He particularly likes Hi-Wire Brewing’s Bed of Nails saying, “A little bit richer, a little bit earthier, a little bit more . . . think of a hint of ground coffee. So all of those flavors go really well with a beef slider.”

Wine: Beef and pinot noir are a natural fit, says Prieur. Her favorite for this specific pairing is a 2015 Brooks pinot noir. “It’s a little oaky, but not overwhelming.”

All photos from Getty Images. 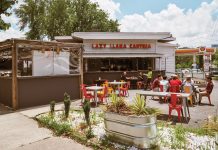 Is patio dining the future of restaurants?