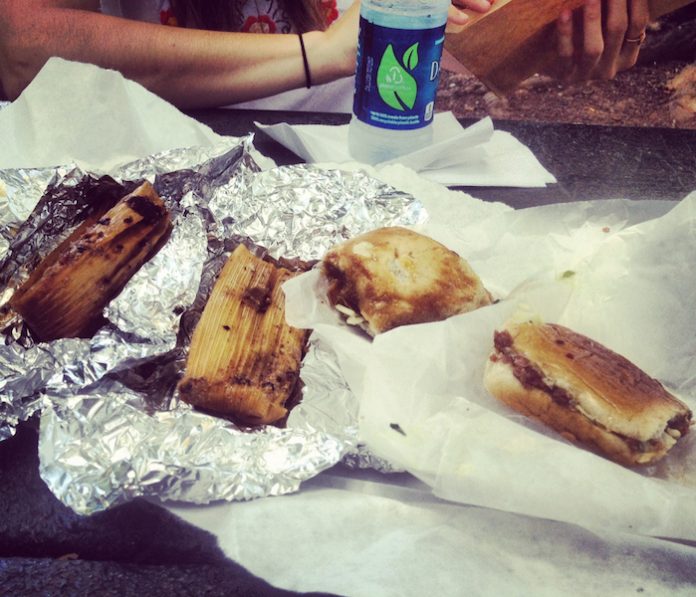 About six months ago, the story went around that we’d soon be getting an Atlanta branch of Big Apple Inn, the Mississippi institution that has been serving up pig ear sandwiches and tamales for the past 70 years.  About a month ago, April Patton, granddaughter of Big Apple’s founder, opened the doors to the new location on Ralph David Abernathy near the West End. An old friend and I dropped in for lunch yesterday and Patton was there behind counter, taking our orders and making them herself.

The menu is short and we ordered nearly all of it: two pig ear sandwiches, two smoked sausage sandwiches, a pulled chicken tamale, and a pulled pork tamale. The closest I’ve been to the original location is this great Southern Foodways Alliance documentary (embedded below) about the place, but, from what Patton told us, she hasn’t changed the menu aside from making the tamales a little bit bigger and offering few extras, like ice cream. For what’s worth, our sandwiches looked like dead ringers for the one’s being served up there: soft, square buns pressed down on the grill and folded up in wax paper. The Atlanta location is takeout only, so we took our bags to nearby Mozely Park and ate on a picnic table. The weather was just about perfect for that sort of thing.

It seems funny to say this about a place that’s hardly a month old, but you can taste the history in these sandwiches. There’s nothing trendy about them (okay, aside from the offal). These are tried and true recipes handed down for decades – pig ears cooked to the point of falling-apart tenderness, smoked sausage pressed between two greasy buns, tamales with just enough of a kick. They also happen to be ridiculously cheap – everything we ordered plus two bottles of water came out to a total of about fifteen bucks.

No matter how great they are, pig ear sandwiches probably aren’t for everyone. My old friend took one bite of hers, insisted it was delicious, and then passed it off to me to finish. “That’s just not where I am right now,” she said. She preferred the chicken tamale; I’m sold on the pig ear. We finished every bite, even though we probably didn’t need that much food. What I really needed was a siesta afterwards.

If a pig ear sandwich is where you are right now, you might think about dropping in.