Lee + White, the mixed-use development just off the BeltLine’s Westside Trail, is expanding and will soon feature a pop-up container village of retail shops, a hair spot called Beya Salon Studios, and a Team Rehab physical therapy facility. Like many of its mixed-use development counterparts, it will also entice visitors with a new food hall, where 13 stalls will serve a variety of cuisines. Here are the first four:

Want to carbo-load outside of your kitchen? This is the place. The build-your-own pasta spot owned by Shaunya Noble previously followed a delivery-only model. Now, diners will be able to choose a pasta shape, sauce, and “mix-in,” such as sausage, tomatoes, burrata, and artichoke hearts, prepared on the spot. Don’t worry, a few salads on the menu offer the opportunity for some balance.

After closing its brick-and-mortar restaurants in Virginia-Highland and Old Fourth Ward, the Gekko team didn’t miss a beat. It served Japanese food at festivals and the like through its food truck and opened a stall in Politan Row at Colony Square last year. Its Lee + White stall will have similar offerings, including hibachi bowls, sushi bowls, spring rolls, and seaweed salad. Try the ponzu tuna bowl for something light and satisfying.

Originating in Atlanta, this American food spot has eight locations in the metro area alone, plus nearly 20 more around the country. Suffice to say, it can’t be ignored—nor should it! Expect 22 varieties of hot dogs, including corn dogs, “surf & turf” with lump crab, brats, soy “veggie” dogs, and jerk chicken dogs. Wings, burgers, onion rings, baked beans, and fries will be available as well. 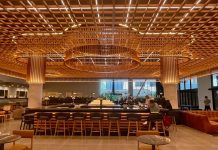