Maureen Kalmanson, founder of Campagnolo and the recently closed Peasant Bistro, is set to open another restaurant this month in what some might consider a doomed location late: the freestanding building on 10th Street between Peachtree and Juniper streets that previously housed the short-lived Mint3 Thai & Sushi Bar, and Tenth Thai Cuisine & Lounge before it. Kalmanson named her forthcoming venture, Henry’s Midtown Tavern, after her dog.

“It’s a perfect location,” Kalmanson says. “No one has ever really done anything to make the most of it before.”

Campagnolo, which opened last year, has been successful in yet another seemingly cursed space near 10th Street and Piedmont Avenue—previously home to Nonna Mia, Sweet Devil Moon, Big Red Tomato, and others.

“I don’t believe in doomed locations. Campagnolo and Henry’s are both in the heart of Midtown,” she explains. “If you give people in the neighborhood what they are looking for, then you will succeed. You have to put together good food and friendly staff.”

She declined to talk about Peasant Bistro’s closure, instead mentioning that she’s “moving forward, pursuing other options.”

“I’ve been thinking of concepts for a long time, and when I find a particular location where I think a concept will fit, I put them together,” she says. “In this case, the location and what fits the neighborhood is what has inspired me, and I have drawn on my experience with Mick’s and other locations to develop Henry’s.”

Henry’s will be a casual place with “a chef-driven menu of appetizers, pastas, sandwiches, entrée salads and desserts,” according to the press release. Kalmanson won’t discuss details about the food at the moment, except to say that Campagnolo’s Daniel Chance will be designing and overseeing the menu. She also notes that Henry’s will serve twelve beers on draft and fifty by the bottle, in addition to wine.

The interior of the restaurant features dark brown booths and lighter brown walls, two bars and textured columns made from reclaimed wood. Upon opening, Henry’s will feature a sixty-seat patio, but Kalmanson has plans to add a 150-seat side deck under the canopy of the trees on 10th Street this summer.

Henry’s will be open for lunch, dinner and late night seven days a week, as well as brunch on the weekends. 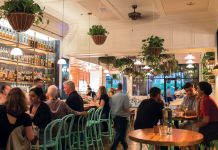