If you know the Atlanta Chinatown Mall at all, likely it’s as the shopping center that’s home to dim sum mainstay Oriental Pearl. But the mall’s origins actually date back to 1988, when it opened as a cultural center to serve the area’s growing Chinese American population. Located off Chamblee Dunwoody Road, the 55,000-square-foot property we see today is the result of a significant renovation that occurred in 1999. Thirty tenants—including a Chinese video store, a supermarket, and an herbal medicine shop—make up Atlanta’s own Little China.

At the center of the mall is the food court, its kidney-shaped perimeter flanked by six restaurants. Square tables fill the court, and red lanterns dangle from the ceiling. Menus written in Chinese hanzi sprawl down the walls. Nobody comes here for ambience. They come for the food, which spans the breadth of China’s culinary diversity. Plump pork dumplings with chives and soothing soups with hand-pulled noodles at Lan Zhou Noodle nod to the north. Pan-fried rice noodles (chow fun) and roasted Peking duck from Hong Kong BBQ bow to signatures from Canton in the south and China’s capital, Beijing. Chong Qing Hot Pot serves one of the spiciest tofu classics in Atlanta: mapo doufu straight from the Sichuan province, a land of tongue-numbing chiles and oils. China Kitchen rounds out the court with a Pan-Chinese menu, succeeding with white fish boiled in spicy chili oils and green beans blistered in a sizzling wok.

The sheer breadth of the menu options at Atlanta Chinatown Mall is an important reminder that even though Vietnamese pho, Japanese ramen, and Korean kimchi may be all the rage, the cuisine of the world’s most populous nation also deserves some love. The mall proves to us that, like so many other ethnic cuisines, China’s culinary muscles tend to flex the most in unassuming settings.

Thirty dollars (the court is mostly cash-only but has an ATM) will easily feed six—and feed them like a real Chinese family, a meal without General Tso or a single eggroll. The vendors speak English, so ordering isn’t a problem if Mandarin isn’t your second language. The challenge is sifting through hundreds of options to find the good ones. Start with the fifteen we’ve picked out here. They’ll give you the courage and appetite to keep digging

You could spend three days roasting a duck. Or you could go to Atlanta Chinatown mall. 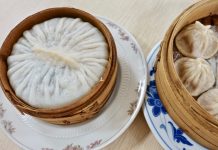 This soup dumpling at Atlanta’s Chinatown food court is enormous