“This doesn’t scream ‘persimmon,’” Robby Astrove says. “There’s no sign.” We’re standing on the Freedom Park Trail in Poncey-Highland, cyclists zipping by around us, looking at a tree with simple, dark green leaves. It blends into the background, a pixel on Atlanta’s verdant late-spring landscape. But a closer look reveals nubby green persimmons hanging from the tree’s branches. As people stroll past, Astrove wonders: Will they notice when the fruit ripens come autumn? “The curious city dweller—do they stop and smell it, touch it, feel it, look it up on their iPhone?” he says. “It’s like, Holy shit, it’s an American persimmon. They’re delicious.”

Astrove, at least, will be back. A park ranger at Arabia Mountain nature preserve by day, he for years has had a side gig foraging food throughout Atlanta and selling it to the city’s chefs and bartenders. He focuses primarily on unexpected, publicly owned spots in the city. On a stroll through Oakland Cemetery, Astrove rubs a bush and notes that it’s sage. Around the corner, he notices lemon thyme growing among the plots; we stop for a taste with the city as a backdrop. There’s food everywhere, he says.

Though he insists he’s a beach guy at heart, Astrove nails a certain mountain-man aesthetic: lean, bearded, with a serene disposition and long hair pulled back in a ponytail. A Miami native with a background in environmental education, Astrove moved here in 2007 to work with Trees Atlanta. It was a dream job, he says, because he got to know the city inside and out as he planted trees in various neighborhoods.

It wasn’t until 2013 that Astrove started foraging professionally—if, at first, a bit haphazardly. Dropping his car off at a Reynoldstown mechanic for repairs one day, Astrove took a long walk along the BeltLine to Poncey-Highland—where, he’d heard, some Nanking cherries were growing. Many, as it turned out. “I found a nice load, I’m walking back on the BeltLine, and it starts getting heavy on my shoulders,” Astrove recalls. Looking for a way to unburden himself, he popped into the Glenwood Park restaurant Gunshow to see if anyone was interested. “I did everything wrong,” he says. “I walked in the front door. I just looked stupid.”

A couple of the chefs tasted the cherries; to his surprise, they offered to buy everything. Astrove didn’t even know what to charge, but he did know that he liked the thrill of finding the fruit and selling it. He started making contacts at other restaurants, including Miller Union. Local chefs, he found, welcomed the chance to learn about ingredients sourced from right down the street. “It’s the same fruits that are growing in their zip code, and they don’t know about it,” Astrove says. Over the years, Astrove has seen chefs and bartenders shape their offerings around his deliveries: “What’s coming in the back door determines the menu,” he says. “It’s so exciting.”

Today, he has a system—he knows which doors to go through and how to deliver a formal invoice. You’ll find his plants on dinner and drink menus around town. Astrove likes to harvest species native to North America, including pawpaws and elderberries—they’re “part of our identity,” he says. “When you see all these goofy plantings, it’s like, That’s not how Atlanta is supposed to look. Atlanta’s supposed to be oaks and hickories and persimmons and pawpaws and serviceberries. It’s about connection, so I like to promote the native fruits especially.”

About that last berry species: Astrove is an ardent fan. The serviceberry, aka the juneberry, is an unsuspecting bush that lines streets throughout the city, blooming with snow-white flowers before sprouting small, sweet-tart berries in a crimson-to-purple ombre. At the Deer and the Dove, bar director Matt Watkins mixes a cocktail with syrup made from serviceberries that Astrove forages, plus gin and honeysuckle. In June, the Deer and the Dove chef and owner Terry Koval (a longtime client of Astrove’s) was one of a handful of participants at the first annual Serviceberry Fest ATL, which Astrove organized in East Atlanta, where local chefs and bartenders celebrated the fruit: Gourmet Street Foods’ Carla Fears, for instance, served blue-corn arepas with braised lamb and serviceberry escabeche.

Keyatta Mincey-Parker met Astrove five years ago through a mutual friend. The pair bonded over the fact that Astrove planted fruit trees in West End, where Mincey-Parker lives. When she became a bartender at Bon Ton, Mincey-Parker made liqueur with lavender that Astrove shared with her. Last year, in East Atlanta Village, Mincey-Parker launched A Sip of Paradise—a community garden where fellow bartenders and other hospitality professionals could unwind. She called Astrove to help her develop the plot; he introduced her to plants like mountain mint and pineapple sage. “He’s been an awesome adviser,” says Mincey-Parker, who was also on hand to mix drinks at this summer’s Serviceberry Fest. “He’ll just pop by and put things in the ground.”

During the pandemic, Astrove felt uncomfortable asking restaurants to buy produce at a premium while so many were scrambling to survive, so he put sales on hold—but he kept foraging. “Part of me was like, I can’t see it go to waste and people not use it,” he says. “I ended up just giving it away and sharing it.” Astrove has other ways, too, of connecting people with the food that’s hiding in plain sight. Active in food-justice work, he’s helped community groups across Atlanta plant fruit-bearing trees that anyone can forage from: figs, persimmons, pawpaws. People shouldn’t be hungry, he says, when there’s food growing all around them. 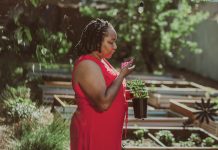