Home Uncategorized Greenville import UP on the Roof will bring sky-high views and bottled... 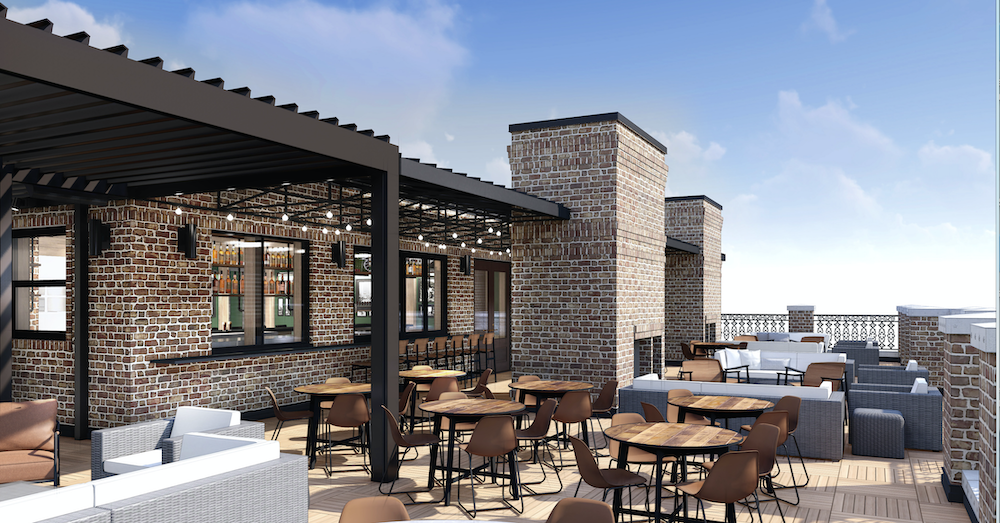 Situated atop Liberty Hall, a restaurant called UP on the Roof will soon offer views of Alpharetta City Hall, City Center, and, off in the distance, Kennesaw Mountain. Planned to open in late 2021, UP on the Roof will offer spins on Southern cuisine with pork cheek tacos and duck n’ biscuits, plus a focus on hand-crafted bottled cocktails.

The second location for the restaurant—the first opened in Greenville, South Carolina, in 2016—will seat 300 people, with more than half of that on the rooftop deck.

“We were really looking for a view in an active area. This is the highest point in downtown Alpharetta,” says Wilson Oswald, CEO and co-owner of UP on the Roof.

The space is designed for year-round dining both inside and out. The rooftop deck will have six fireplaces, plus fans and infrared heaters. Special screens and awnings turn the space into a semi-conditioned dining area during periods of bad weather. Like the Greenville location, the Alpharetta UP uses elements of brick throughout. Unlike Greenville, the bar and host stands are designed from Jack Daniels barrel stays.

Initially, the menu will reflect Greenville favorites, but “as time goes on, we’ll hone into our locality,” Oswald says. Executive chef Max Tezza is leading the kitchen, bringing experience from the Greenville location. The menu is divided into sections: “From the Farm,” “From the Sea,” and “From the Ranch.” It will change quarterly. In the past, featured items included beer-brined frog legs called “swamp wings,” grouper and grits, drunken mussels, and rabbit tacos. Everything is designed to share.

“We like to take items and give them a twist for intrigue,” Oswald says. “People want to experiment but also want to be comfortable at the same time.”

Bottled cocktails should make diners comfortable almost immediately, as Oswald says they can be brought to the table “in a matter of seconds.”

“These are interesting, nuanced cocktails bottled ahead of time and sealed for freshness,” he explains. Options include “It’s Strawberry Thyme: made with Fords gin, Cointreau, strawberries, thyme, and lemon sour; and “Mint To Be” with Flor de Cana rum, cucumber water, lime juice, mint-infused honey syrup, lemon bitters, and club soda.

Due to the nature of certain ingredients, other cocktails, such as the “Up in the Air” (Reyka vodka, St. Germaine, blackberry simple syrup, lemon juice, and mint), are mixed to order. There will be 25 wines available by the glass, including two on tap, with additional options sold by the bottle. Fourteen draft craft beers will be served, plus more in cans.