Ladybird Grove & Mess Hall, the patio-centric restaurant and bar just off the Beltline, is scheduled to open in the next two weeks across from Rathbun Steak at mile marker 9.25. Led by restaurateur Michael Lennox and executive chef Robert Lupo—formerly of Leon’s Full Service—, Ladybird will focus on sharable dishes previously described as “campfire cuisine.” Kyle Schmidt of King + Duke will serve as sous chef. The initial menu will offer approximately twenty items that will change based on local availability.

“Chef Lupo has a talented hand with vegetables, so we are going to feature a number of creative vegetable plates that can function equally well as shareable starters, sides, or light main courses,” Lennox says.

Offerings include Navajo Fry Bread with Benton’s country ham, wildflower honey, lemon, and parsley; Little Fish Fry with cornmeal fried smelt, grilled lemon, and cucumber tartar; and the Campfire Cheeseburger made with meat ground in-house. There will be two or three family style meals, as well as meat or fish-driven plates served in cast iron skillets. Look for the whole chicken, grilled spatchcock style, served with grilled tortillas, salsas, and cebollitas. Desserts will rotate in and out, including a s’mores-inspired treat.

On the weekends, Ladybird will serve brunch, including biscuit sandwiches, Red Flannel Hash, and breakfast tacos.

“Being on the Beltline, we have a 2,000-square-foot outdoor space. We’re seeing this space as a beer-friendly environment [where people can] hang out and relax,” Lennox says.

Ladybird will serve twelve drafts—all from Georgia—as well as thirty to forty domestic craft beers in cans and bottles. Wine on tap will also be available (in four varieties), plus fifteen to twenty wines by the glass, and select wines by the jug. All bottles will cost less than $60.

There will be a full craft cocktail program with eight to ten house cocktails that change seasonally. “They’ll have simple presentations, under four ingredients in each,” Lennox says. 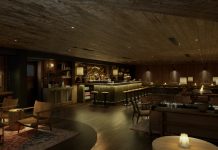