Virginia Willis
All-around Southern cooking legend and author of Secrets of the Southern Table: A Food Lover’s Tour of the Global South

When sharing dining experiences with out-of-town guests, I want to expose them to the breadth of cuisine available in the ATL. Fine-dining destinations, with award-winning chefs using locally grown ingredients, are numerous. Buford Highway is a veritable United Nations of culinary delights. We’ve got a good representation of BBQ and a host of food halls. Unbelievably, what can be hard to find is a good piece of fried chicken and a homemade yeast roll! That’s when we head to Mary Mac’s Tea Room, serving Southern comfort for over 75 years. The food is made from scratch—no frozen rolls, no box-mix cornbread. The corn is shucked, the greens are cleaned, and the macaroni and cheese is made in house, not defrosted. There’s a reason the Georgia Legislature once declared it “Atlanta’s dining room.” Makes me want a cup of potlikker right now . . . marymacs.com

Von Diaz
Documentarian and author of Coconuts & Collards: Recipes and Stories from Puerto Rico to the Deep South

Fried catfish and grits. Since 1984, it’s been among the most popular dishes at Thumbs Up Diner and keeps bringing me back. On the weekends, you’ll see dozens of folks lined up outside the iconic Edgewood Avenue location in Old Fourth Ward, many dressed in their Sunday best—though not for Bloody Marys or eggs Benedict. And that’s part of the charm. Thumbs Up’s breakfast classics—eggs, bacon, skillet potatoes, biscuits—aren’t fancy but are very likely the best you’ve ever had. Plus, servers like Kav, Shorty, and Latasha have waited on me since I was in college, always genuine, kind, and willing to put in a side order of sauteed veggies (not on the menu) to go with my fish and grits. It may be the one place in the city I will always go back to, because, in so many ways, it feels like an extension of home. thumbsupdiner.com

Located inside a true Atlanta institution, Midtown’s Cheetah Lounge, Alluvia serves food worthy of connoisseurs . . . with a side of adult entertainment. All-time faves are the wings—both sweet chili and buffalo are delicious, obviously—and I always get the tender, juicy, and flavorful lamb lollipops. Besides, finger foods like wings and lamb lollipops let you stuff your face while keeping an eye on the show. Wanna feel like a boss? Get their big-ass ribeye and lobster tail and make it rain! thecheetah.com/alluvia

Nearly a century ago, the Atlanta Woman’s Club opened the Municipal Market, an ambitious project that housed the city’s first farmers market and food hall. Today, I find the Municipal Market to be a respite from the monotony of every other urban food hall. In this historic downtown building, guests on the food tours that I lead discover the cuisine of the African diaspora. They might try a South African steak and stout pie at Panbury’s, Ethiopian falafel at Metro Deli, Afro-Caribbean oxtail at Afrodish, or Creole rum pralines from Miss D’s. For vegans, I suggest the crispy buffalo cauliflower at Loco Coco, the “chicken” sandwiches at the Chik’n Factory, and the molasses pecan gelato at Three Peaches. In addition, the market serves as one of the few outposts for fresh produce and meats in downtown’s food desert, making it a crucial community resource. municipalmarketatl.com

For years, whenever anyone asked me for a meeting, my next question was automatically: “Have you been to Bon Ton?” Regardless of the answer, that’s where we were going. I found out about this New Orleans–style bar, in a pink brick building north of Ponce in Midtown, from my industry friends. On my first visit, I played it embarrassingly safe and had the house po’boy. While solid, it’s the Cajun shrimp burger that continued to drag me back . . . well, that and the community. If you’re looking for one of your favorite bartenders in the city, on any given night after-hours, you can find them there perched on a stool, watching as the Mardi Gras beads sway against the bottles on the back bar. bontonatl.com

I worked there back in the day when I was a line cook. Still to this day, this is the best place I’ve ever worked. The food was and is solid, one of the best bars in the city, solid brunch. And all-around good people. localthree.com 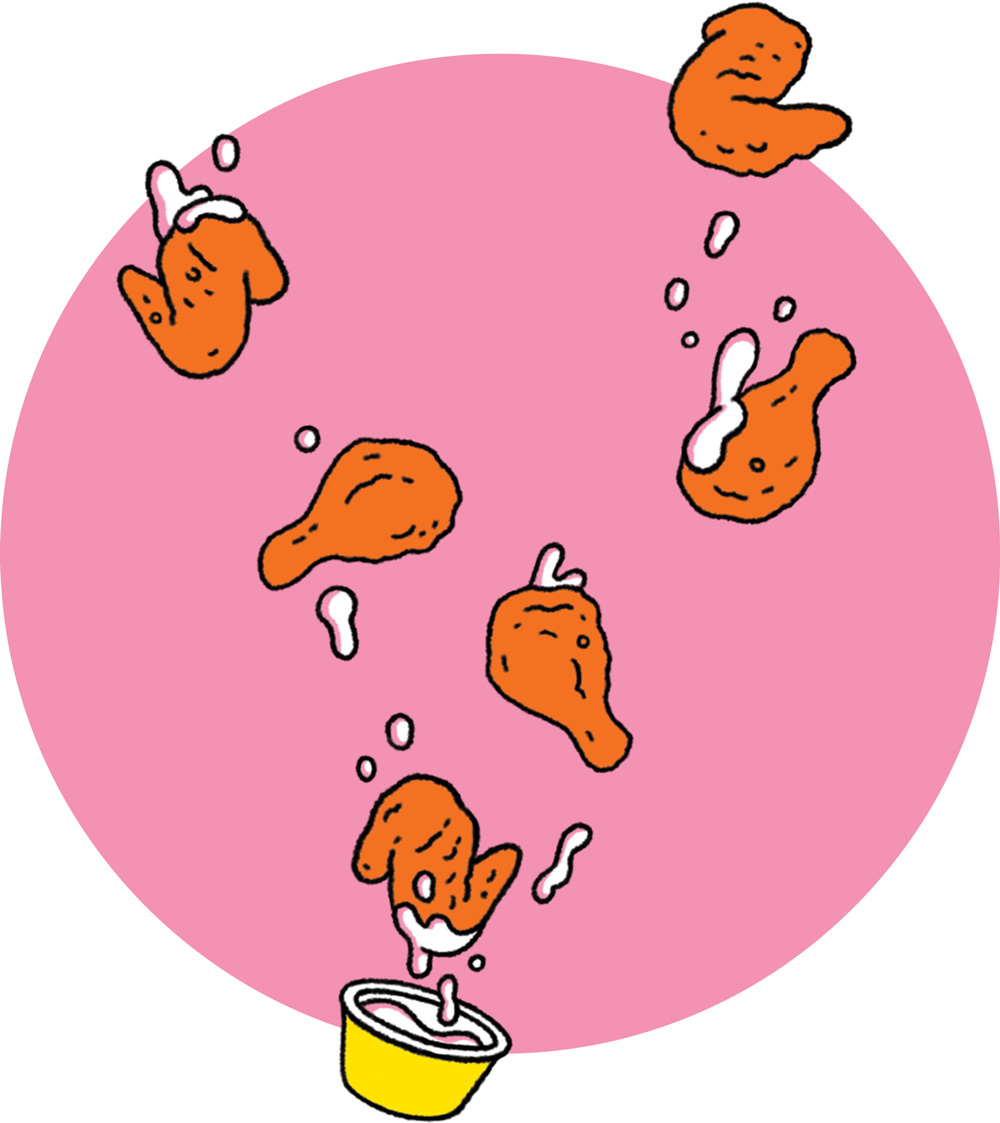 Back in 1982, before Atlanta was a TV show—before Donald Glover was even born—a man named Paul Juliano opened J.R. Crickets in an old building on Spring Street in Midtown. This green, red, white, and yellow rectangle of a dual-level restaurant, with a mascot that looked like a love child between Jiminy Cricket and Mr. Peanut, was decidedly tacky. But it also had outstanding wings made in the style of Juliano’s hometown of Buffalo, New York. The chain has since expanded to South Cobb, Vine City, Union City, State Farm Arena, and beyond and remains overwhelmingly supported by Black customers, many of whom may have no idea that Juliano is a white guy from out of town.

Not that they’d care. I certainly don’t—I gladly pay the price (recently increased) for JRC’s hot wings. I know all the names of the off-menu wings by heart: Before “lemon pepper wet,” they were called “Fester,” and you could get them if you knew to ask. The fries have always been delicious, along with the rest of the menu’s assorted tavern bites, Hennessy mixed drinks, and cold pitchers of Heineken. Every location, from OGs like Cascade to recently opened sites like downtown College Park—even the fake “original” that occupies the former IHOP on North Avenue—is a great place to see and be Atlanta, whether or not Donald Glover shows up. J.R. Crickets is one of the great TV One Unsungs of the city’s sports-bar food scene, and if I may speak for Black Atlanta for just a moment: I believe wholeheartedly that J.R.’s crowd would welcome more of their white neighbors, just as more of white ATL would love being there—especially when the Falcons are on the big screens. Don’t miss out on one of this city’s greatest food institutions, where “old,” “new,” and “true” Atlanta come together, and where chicken is still chicken, but the wing will always be the thing. jrcrickets.com

Juan Vidal
Author of Rap Dad: A Story of Family and the Subculture that Shaped a Generation

When the “restless chef” Peter Chang presided over Tasty China in 2006, he turned heads in the Atlanta food scene with his arsenal of aromatic seasonings, deep flavor, and spice. And while Chang’s stay was all too brief, the restaurant—now with locations in Smyrna and Ponce City Market, in addition to the Marietta original—has remained a go-to for lovers of Sichuan cuisine. My family and I stumbled upon Tasty China when we moved here from Miami four years ago. Since then, we’ve been regulars, popping in whenever we’re craving dishes with a little heat. The “hot and numbing” options—from beef to tofu and bamboo fish—bring a kind of addictive, euphoric burn. Other standouts include the dan dan noodles, fried eggplant, braised fish in red chili oil, and spicy Sichuan chicken with peppercorns. My nine-year-old daughter always makes sure we cap off our visit with at least one of her favorites, like sweet soup dumplings or deep-fried sesame balls. tastychina.net

We’ve been going to the Porter since it opened in Little Five Points in 2008, shortly after we moved to Atlanta. The beer selection is great, but it’s the consistently delicious food—goat cheese fritters, fish and chips—that keeps it in heavy rotation. We find ourselves there again and again, whether it’s date night or taking out-of-towners. It’s the kind of place that feels like it’s been around forever. We hope it is! theporterbeerbar.com

No place has impressed me more with its pandemic pivot than this showcase O4W restaurant (arguably Atlanta’s best) turned specialty market. Though it now sells some items made by others, Staplehouse still prepares exquisite restaurant-quality house specialties of its own: refined chicken-liver tart with burnt honey gel, hefty pâté en croute, shapely beef-cheek hand pies, wagyu brisket with tortillas, pork ribs plate with shaved fennel, alkaline noodles with chili crisp, and a world of traditional pastries and cookies. All are crafted with the same power and grace that used to be the rule when Staplehouse served its food indoors. Now, you order at the counter (don’t skip the beauteous cocktails), and everything will be brought to you in a redesigned garden setting that confers a special magic on the experience. At five years old, Staplehouse may be too young to be considered venerable—but nevertheless writes its own place in the history of Atlanta. staplehouse.com

This is America’s restaurant, of course—but first, it was Atlanta’s, established in 1955 as a humble 24-hour diner in Avondale Estates. Across its seven decades, Waffle House has provided many of us with happy memories; here’s one of mine. It was a cold November weekend a few years ago, and I had been visiting a friend out of the state. Weary from driving as I crossed the Georgia line, I spotted the tall yellow beacon and pulled into the parking lot. A parking lot off a highway interchange near a state border—a weird kind of interstitial space, the kind of no man’s land where Waffle House shines brightest. It was a Sunday night, the place was absolutely deserted, and, as I dug into a plate of scrambled eggs and hashbrowns (smothered, covered, peppered), the restaurant’s speakers began ringing with the opening notes of an unmistakably jolly song—and then, the intro music gained steam, some sleigh bells kicked in, and there it was, Mariah Carey’s “All I Want for Christmas Is You,” ringing out across the empty dining room. What joy! Strange to say about a fast-food franchise, but Waffle House pulls off a specific kind of magic trick: Physically, you could be anywhere (the chain has outlets now in 25 states), but it almost always feels like home. wafflehouse.com

In the early ’90s, when Atlanta’s culinary stars were men like the brazen Paul Luna, known to jump on tables and drop trou, or the imperious Günter Seeger, who earned Atlanta its first Best Chef Southeast award from the James Beard Foundation, Marla Adams opened an unpretentious French cafe in a 1916 bungalow just across from Manuel’s Tavern. Of the three chefs, she is the only one still operating an Atlanta restaurant. She named the place Babette’s, after the Oscar-winning Danish film Babette’s Feast. And like the movie’s titular character, she has “the ability to transform a dinner into a kind of love affair, a love affair that made no distinction between the bodily appetite and the spiritual appetite.”
Though I’ve never met Adams, when I dine at her tables, I feel, well, nourished. Her small plates are whimsical, with offerings like steamed mussels with strawberry and serrano pepper sauce or pork and veal piroshkis with tarragon butter sauce. But the entrees are straightforward classics—filet mignon, veal piccata, baked halibut. The magic is in the details: Sauces always enhance, never overwhelm; potatoes are sliced thin and tender; green beans are firm and flavorful; the endless baguettes are always hot. Nothing is an afterthought. What Babette’s reminds me of most are cozy, neighborhood European restaurants which you can discover only by walking past, never by scrolling on Twitter. You may forget their names; but, with a nod to Maya Angelou, you’ll never forget how they made you feel. babettescafe.com

This article appears in our October 2021 issue.