A small kitchen fire at Buckhead Life Restaurant Group’s Veni Vidi Vici closed the restaurant for two weeks last July. It destroyed the rotisserie around which the menu and concept were based and could not be restored. Since then, executive chef Jamie Adams has revamped the menu and the concept to focus more on regional Italian cuisine with an emphasis on seafood.

“The rotisserie had been the focal point of the restaurant for twenty years,” Adams says. “Rather than try to imitate it with smoking our roasting, we did a huge about-face.”

The team decreased the portion sizes and prices in an effort to encourage diners to eat more like Italians.

“In Italy, people have more smaller portions, not just one massive bowl of pasta or piece of braised meat,” Adams says. “It’s more a little bit of this and a little bit of that—a very balanced, healthy way of eating.”

Food is now cooked in more traditional manners using pans and ovens for seafood. The menu features areas of Italy, such as Venice, and while the fish offered may change, the cooking methods are typical of the region. All are cooked classically with a simple garnish and served without starches or vegetables, which are sold separately.

“So we might have a branzino or striped bass or another flat fish with a nice skin, and cook it in the way of Liguria with some braised mushrooms,” Adams says. “We also have a seafood stew and a dish from Piemonte with sweetwater, or lake fish.”

The fish dishes are each about five ounces and cost $16 to $19. New vegetable sides such as oven-charred cauliflower with olive oil are now available.

Pasta now comes in only one, smaller yet shareable size. The spaghetti and meatball dish is now made with duck, rabbit, beef, and turkey instead of veal and pork. Spaghetti carbonara is cooked in the Roman style with raw egg, black pepper, pecorino, and pancetta. Daily pasta and risotto specials are also on the menu.

In addition, the bar menu is ever evolving with new barrel-aged cocktails. Veni Vidi Vici’s décor may soon undergo a renovation as well. 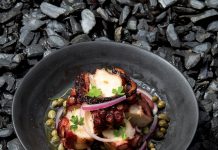