Spice Market, the restaurant in the W Atlanta Midtown hotel, will close in late April and be replaced by a farm-to-table, Starwood Hotels concept called TRACE. Led by Spice Market’s executive chef Shean Suter, TRACE will open in June and be the last of Starwood’s four TRACE locations to open. Existing TRACE restaurants operate in Austin, San Francisco, and Seattle.

Focusing on “traceable” ingredients and “conscious cuisine,” TRACE has a different menu at each location, determined by the chef and ingredient availability. For the Atlanta location, the focus, aptly, is Southern fare.

“Each TRACE is set up for the regional area. There is no ‘you have to have this’ or ‘you have to have that,’” Suter says. “If I’m getting an item from a specific farm, it will either go directly on the menu as a descriptor or we’ll give a tribute to that farm in some way.”

He shares more details below.

How long have you been with the W Hotels?
Three years. I was in Carmel, California, at [Hyatt] Highlands Inn before that.

Have you been to any of the other TRACE locations yet?
I have not. It’s in the style of being simple and knowing where everything comes from, so it’s similar to that of many places in California.

Tell me about the concept.
What we’re trying to accomplish is knowing where our food comes from, so we can serve healthy food, raised humanely. We have relationships with farmers and ranchers, so we can be community driven and regionally responsible. We support as much of the area as we can.

TRACE is touted as having a menu “steeped in tradition.” How so?
The start of the food is steeped in Southern food and we’re branching out from there. The bases will be pimento cheese and pickled shrimp and things like that. Then we’ll grow that further, using different items and taking it from there.

What will be on the menu?
Pickled shrimp and Vidalia items are big for summer. We’ll have crawfish, fennel, spilled peas, some fried chicken, some pimento cheese, and some mac ‘n’ cheese. It will be homey, approachable Southern kind of food. A little over half of the dinner menu is small or sharing bites, then entrees and desserts. It will change seasonally, if not more.

What’s for breakfast and lunch?
Breakfast will be eggs and biscuits and gravy and things like that. Lunch will be very much lighter [than dinner]—sandwiches, salads and a couple of apps. The menu will be small but very approachable. It’s going to change seasonally. That’s what’s great about having the relationship with the farmers—our menu will change with whatever’s going in [weather-wise].

Will any signature menu items or customer favorites from Spice Market pop up at Trace?
No, the concept is completely different even as far as flavor profile.

What’s your radius for sourcing the food?
The South is our basis and that can reach to where it needs to reach as long as I can have conversations and talk to the guys. We want to get the best product that we have confidence in. That doesn’t have to be organic or free range, but it has to be raised or grown with care and done correctly.

Not every small farm can supply all the hotels. We’ll do the best to source from multiple places to have everything we can, but sometimes you have to supplement. The downside to using all local farms is if one in the area is having a bad summer, they all will be because of the weather. Without putting the restriction on [the radius], we’ll have a better chance.

What local producers will you be sourcing from?
We’re starting to work with Wolfscratch Farm right now. Jamie [Rosenthal] there is working on putting a co-op together with the farms in his area. We’re looking to support those farms. We’re using Pure Bliss Organics granola in Marietta. AtlantaFresh Greek yogurt is definitely on our list. We’re using a co-op of ranches that come from all over Georgia for meats. There’s also Country Charm Eggs, Spotted Trotter, PodPonics.

What are you growing on the premises?
The W has small herb garden near the restaurant in the retreat area. We’re planning to rebuild the bigger rooftop garden [that froze earlier this year] near the chiller. I’d like to grow tomatoes, berries, grapes cucumbers, okra, and peppers.

How will the beverages change?
We have a cocktail curator who works for Starwood. She’s giving us a big push to start with [setting the] direction. Our beer program should be pretty fun. Obviously there will be the regular domestics and a few imports that are everywhere. But the main bulk of the list is all Georgia beers. There are thirty-plus breweries in Georgia now, ten to fifteen in Atlanta. We’ve got so much juice, I don’t need to look on the West Coast. We’re trying to get three drafts—two mains and a seasonal—and then bottles. [For wine], I have a couple samples from Dahlonega. We’re working through that piece by piece to find good wines no matter where they are from.

What about the spirits?
We don’t want to be too bourbon-heavy. We’re coming into summertime, so we’re trying to keep it a little lighter. I think tequila and mezcal are going to be the next spirits to walk into the limelight.

How will the décor change?
It’s going to have a whole new look with lots of pops of color. It’ll be very rustic—lightwoods with small pops of blues and yellows and things like that. I think there will be one large communal table that shoots through the whole dining room, but we are still working on the rendering. There will be a lot of high tops instead of low seating like we have in the lounge now. 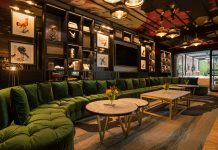 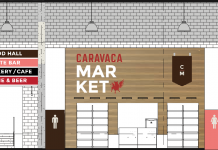 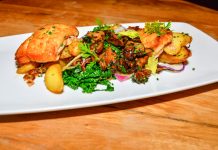