Home Restaurants Where to eat for Hanukkah

For the first time since 1888, Hanukkah will start around Thanksgiving this year (November 27 in the evening), instead of its usual proximity to Christmas. This unusual occurrence is due to the Hebrew calendar, a lunar/solar calendar, not lining up with the standard calendar.

Whatever the explanation, it doesn’t help those of us who haven’t had time to plan for food. So in case the holiday snuck up on you, we’ve compiled eight go-to spots for holiday eats. Here’s to trying a new one each night!

JDR Delishery
This Irwin Street Market spot will be serving sweet potato latkes topped with a choice of cranberry-orange relish and sour cream or holiday applesauce complete with bits of apple, pear, and cranberry. The dish is available to-go ($2.95 each) or at Hilda’s (three for $7.95) throughout the holiday.

Bagel Palace
At Bagel Palace, those celebrating Hanukkah can nosh on four latkes for $4.75 and an open-face brisket sandwich on challah with fries and cole slaw for $10.99. Brisket is also being sold by the pound for to-go orders, and latkes can be ordered for pickup at $1 each.

The General Muir
Through December 4, the General Muir will serve traditional latkes all day long as a platter with homemade applesauce and sour cream, a small side nosh, or as part of the “fish and potatoes” dish (smoked salmon over latkes, sour cream, apples, arugula, and lemon). Latkes can be ordered in advance to take home, too. On the sweet side, there will be blue and white cookies (a spin on the classic black and whites) and olive oil cake with candied lemon icing.

Yum Yum Cupcake & More
Yum Yum Cupcake will offer Hanukkah-themed cupcakes ($3.50 each) and blue macaroons (two for $3) at the Atlanta Food Truck Park at Howell Mill from November 29 through December 5. The truck is only at the park Thursday through Sunday, but customers can place orders by calling 404-405-1999 and pick up their goodies at Yum Yum’s Decatur Kitchen, 215 Laredo Drive.

Landmark Diner
In addition to the roasted lamb shank, “Jewish stuffed cabbage,” and matzo ball soup offered daily, the Roswell Road location of Landmark Diner is serving brisket with potato latkes and applesauce now through the end of Hanukkah. The meal costs $11.99.

The Brickery Grill & Bar
Those dining at the Brickery, a kosher spot in Sandy Springs, during Hanukkah can order potato latkes—a holiday delicacy not on the normal menu; those who want to enjoy a Hanukkah meal home can order latkes, brisket, roast chicken, and house-made applesauce from the catering menu. (A dozen latkes cost $18.)

Goldberg’s Bagel Co. & Deli
All locations of Goldberg’s will offer jelly donuts ($1.75 each) and Hanukkah cookies for the holiday, in addition to brisket and potato latkes. All items are available for both dine-in and takeout. 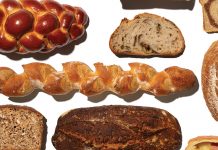 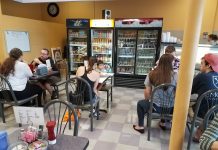