Starting this weekend, the tiny town of Bluffton in far southwest Georgia will have something that it has lacked for more than 40 years: a place to spend money.

Bluffton, which lies between Columbus and Blakely and recorded 103 inhabitants in the 2010 census, hasn’t housed any retail since its last general store shut down sometime in the 1960s, with goods still on the shelves. Now the long-abandoned property is about to have a second life. The Harrises of White Oak Pastures, a multi-species organic farm that lies just to the south of town, have purchased the store, renovated and stocked it, and will open it Saturday with an all-day street party featuring music, beer, and their own food truck.

The party also marks the 150th anniversary of White Oak Pastures, whose owners—Will Harris, his wife, Yvonne, and their daughters Jenni and Jodi—are becoming well-known in Southern food circles, and increasingly beyond them, for a family story that gives hope to people dismayed by the problems of corporate farming. Will Harris is the fourth generation to operate White Oak, following a great-grandfather who started a subsistence farm after the Civil War; a grandfather who turned that small patch into a truck farm; and his father, who expanded the farm into a modern cow-calf operation that used hormones, antibiotics and pesticides to breed and sell animals as quickly as possible.

Harris planned to continue that trend of always expanding and modernizing—but about 20 years ago, he turned his back on that heritage, and began remaking White Oak into a property that would put animal welfare and care for the environment foremost. He took his cattle off drugs, replanted his pastures with a mix of grasses, added organic vegetable gardens, and brought in sheep, goats, pigs, and chickens. Within a few years, White Oak became a place where students from Ivy League colleges compete to serve internships, and ranchers seeking a different way of life come to learn how to remake their farms.

I caught up with Will and Jenni Harris by phone Wednesday to hear how the new White Oak General Store fits into this evolving plan.

Will, you were born in Bluffton. Do you remember when this store was open?
Will Harris: Bluffton was past its prime when I was a kid, but it still had several viable stores, and this was one of them. There was Mr. Clarence Tolbert, who owned a store that was mostly dry goods. Mr. Bernard Hastings had a store that was mostly the meat market. And there were two stores that were general stores, owned by Mr. Greer Mansfield and Mr. Herman Bass. They were side by side, literally about 8 feet apart, and it was very competitive between them.

Do you remember when it closed?
Jenni Harris: When we went in, after Dad had bought it, it was like a time capsule. The calendar on the wall had 1968 on it, so I assume that nobody was there to tear ’68 off to move to ’69.

And what made you buy it? You have a pretty big responsibility just with the farm.
WH: One Saturday morning I was riding through Bluffton, and I saw a young man who had backed up to the door and was filling his truck. I called the owner, who was the granddaughter of Mr. Bass, and she said she had only wanted the outside cleaned up. Well, I didn’t want to see it looted, so I made her an offer for $10,000 for the store and two and a half acres of land.

At the time I bought it, I did not intend to open a store in Bluffton. But we started outgrowing the little store that we had put on the farm at the front of our red-meat slaughterhouse.

JH: The state has widened Highway 27, which goes right by us, so it is four-lane all the way to Florida now, and Google has started recognizing it as a preferred route between Atlanta and the coast. So we have a lot more visitors now, which put pressure on our little store, keeping it full of inventory, keeping it staffed. And having the store in the meat plant was not ideal, for the employees or the customers. So this gave us a chance to do better.

When you renovated, did you keep any of the original fixtures?
WH: It needed some structural work, a roof and a subfloor. It had beautiful heart-pine flooring, eight-inch board, real pretty, so we kept that. It had been looted a bit through the years, the safe had been torn into, but all the inventory was still on the shelves. We’re going to sell it all at our grand opening, put it out on long tables for a dollar or two dollars and let visitors pick through and take what they want.

What kind of products will you bring in?
WH: Certainly all of our farm products. We’ve got five red meat species, five poultry species, eggs. We’ll sell our leather products: We have hides, rugs, purses, soap and lip balm. We’ve expanded our sausage line and we’re going to cook those and sell them. We’ve got organic vegetables from our garden, and spices and pickles and things our chef at the pavilion puts up. We’ve got a Coca-Cola fountain. We’ve got a $9,000 soft-serve ice cream machine.

JH: My sister Jodi Harris Benoit, who is going to manage the store, has been reaching out to small Georgia producers. So we’ll have Banner Butter, jams and jellies, local wines.

WH: Mind you, this is a country store. So we’ll sell ammunition and fishing tackle and all the essentials of life. From Bluffton it is literally 12 miles to the nearest place where you can buy a roll of toilet paper or a tube of toothpaste, so we’ll sell all that. And the city council let us have a beer and wine license. They have been great to work with.

I get the sense this isn’t really just about having a store, is it? This is about bringing Bluffton back.
WH: Once I bought the store, someone offered me another property and I bought it, and another property and I bought that, and we ended up with a good number of lots and houses and storefronts—about 15, I would say. We have been renovating them for our employees to live in. We are far down the application process for a USDA loan that will let us build worker housing, really nice, small, efficient houses that will match the way Bluffton used to look.

Bluffton and the other little towns in rural southwest Georgia, they are like the land that time forgot, but there is a real cultural richness here. And our core values at the farm are animal welfare, environmental sustainability and regeneration, and the enrichment and restoration of rural America, and everything we are building, including this store, fits into that.

White Oak Pastures’ 150th anniversary celebration and General Store Grand Opening take place Saturday, October 15, beginning at 9 a.m., with a ribbon-cutting at 11:30 a.m. and music from 6:30-10 p.m. Admission is free; there will be food, soft drinks and beer for sale. A reservation-only brunch will be served at the on-farm pavilion from 11 a.m.- 2 p.m. Details and brunch tickets are at whiteoakpastures.com.

Maryn McKenna is an Atlanta-based contributor to National Geographic and other magazines. She wrote about White Oak Pastures in a prize-winning story for Modern Farmer in 2013. 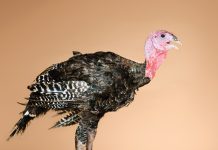