For 20 years, Anna Russ worked in oncology clinical research that aimed to discover and test new drugs for cancer treatment. She traveled to more than 65 countries, where she was fascinated with how cultural influences and belief systems affected health outcomes. After examining thousands of patient charts, she says she felt almost disenchanted with the way diseases like cancer are approached around the world.

“We’re good at reacting to catastrophic disease,” she says. “But the current medical system isn’t designed for prevention. It’s not designed to mitigate risk; it’s designed to react to it.” That notion set Russ on a path of curiosity to explore other modalities such as Eastern philosophies that embrace a holistic system. It also led her to discover Ayurveda, a type of Eastern medicine that focuses on a holistic approach to health and disease prevention primarily using nutrition and lifestyle therapies rather than the “reductionist science” of reducing unknown variables for optimum health and wellness. She finally decided to leave her corporate role to start Anna Apotheca, a company that offers training and certification in Ayurvedic medicine, as well a product line of teas.

“I tell people I’m still in biotech; I just use whole plants now,” she says. “I use all the same protocol, all the same tools I gained in all of those years [as a researcher], but instead I’m using food and whole plants. I’m using what your belief systems are, where are they out of balance, all of those different end-points to try and regain or optimize health.”

Russ was inspired to develop her tea line, Teaney, after an aunt’s ALS diagnosis devastated her family. “When I get stressed out, I can’t sleep. And when I don’t sleep, I’m a nightmare,” she explains. “I found myself really overwhelmed [after my aunt’s diagnosis] and felt helpless with what my family was going through. I knew exactly which herbs I needed to make a tea that would help me sleep and quiet my mind. But I was so overwhelmed that all I wanted to do was pour a glass of wine and go to bed.”

But that exhaustion drove her to apply her years of scientific process to figure out how she could make tea better and easy to make, while also ensuring that she was getting the right dosage of the herbs. She saw a problem in the way tea is often manufactured—even though a bag may say it contains 150 milligrams of chamomile, the drinker doesn’t know much they’re actually extracting when they steep the tea bag in hot water, she says. It’s too variable.

“A lot of the chemical constituents that are relaxing and calming often are lipophilic (meaning they want to attach to a fat and not water). Putting it in water isn’t always the best medium,” she says. “It’s actually repelled, so you’re not getting everything the plant has to offer you.”

Russ had two problems to solve in creating a better tea: One was that to make the vitamins, minerals, herbs most effective, they needed a fat or an emulsifier. The other was that dry tea leaves oxidize so quickly that their flavor diminishes day by day. She found her answer to both issues in a common household ingredient: honey, which acted as both an emulsifier and a preservative. Russ takes her honey seriously—she only uses local honey and requires a material safety and data sheet as well as a certificate of analysis from her vendors. Honey is so important to Teaney that’s it’s the root of the brand name: Russ combined “tea” and “honey” to arrive at “Teaney.” (No relation to electronic music star Moby’s now-shuttered NYC teahouse TeaNY.)

Russ wanted to make sure Teaney ticked all of the boxes of a great tea. She wanted it to smell great, be shelf-stable, and simple for anyone to make. For her Turmeric Golden Milk latte blend, for example, she found that by combining honey with finely ground tea leaves, ground coconut, and other herbs and flavors such as ginger, cinnamon, cardamom, and turmeric, she could extract everything the plants had to offer and pass those benefits on to the drinker by mixing the tea with a steamed, plant-based milk such as soy or almond. None of the Teaney teas require bags or steeping—the drinker simply mixes the tea directly into a type of milk or into hot water.

Teaney has already amassed an Atlanta fanbase. Local health guru Jen West now serves it at her health-focused Cafe West Express in Buckhead, and Atlanta Food & Wine Festival founder Dominique Love is also a big supporter. “[When I was diagnosed with cancer twice in 2014,] Anna was by my side from the get-go, providing Ayurvedic treatments to help my body heal and get through a lot of painful moments,” says Love. “Her teas were life-changing, especially one tea that helped me with sleeping, something that has evaded me for years. I got my office hooked, too. Being in the food and beverage event industry, my team often burns the candle at both ends. But Anna’s teas have been essential to keeping us on track, energizing us when we hit a wall and soothing stressful times.”

I had the chance to taste Teaney recently at Brash Coffee in the form of a soy latte made with the Turmeric Golden Milk, and I was honestly wowed. The vibrant orange-yellow tea (the color comes from the turmeric root) sung with ginger and, although it has no caffeine, I found myself feeling energized. I’ve since tried her matcha, which achieves that creamy and unctuous umami perfection that discerning tea lovers will appreciate. It isn’t watery, but creamy thanks to Russ’s methodology. For me, the flavor alone was enough to make me a fan. If there are health benefits, even better.

Teaney is available on its website and at Brash Coffee and Café West. Russ will also make an appearance at the Southern Marketplace within the tasting tents at this year’s Atlanta Food and Wine Festival. 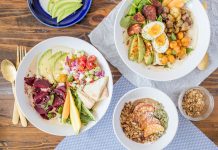