Home Uncategorized Which is the right sparkling wine for your party?

Is there any party that can’t be instantly improved by the sound of a cork popping? Sparkling wine is a holiday-season staple for a reason, but not all bubbles are created equally: While a swanky cocktail party may call for your best champagne, a rowdy midnight toast with Solo cups warrants something less refined. To help you plan, we sat down with sommelier Steven Grubbs, wine director at Empire State South, for a blind tasting of four sparkling wines of our choosing, ranging in price from under $10 to over $30. Here’s how they shook out, ranked in order from “regiftable” to “worthy of a cameo at your boss’s dinner party.”

Porta del Vento Voria Bianco Frizzante ($25)
Upon seeing the cloudy, unfiltered wine in the glass, Grubbs sighed: “This is the kind of thing I usually hate.” Grubbs isn’t a fan of natural wines in general; he thinks some wineries get away with sloppy technique under the mantle of “weird for weirdness’s sake,” but he admitted that the nose on this one isn’t as pungent with the aggressive bread and vinegar notes that many others in the category possess. Grubbs found the wine’s melange of gooseberry, ginger, sage, and sweet lime “really interesting.” But he was turned off by the finish, where he detected a subtle trace of mousiness (a phenomenon common in natural wine). “If I had to drink it, I wouldn’t be mad,” Grubbs conceded. “But I would probably regift this wine to someone with trendy taste.”

Best for: Beer lovers. With hazy sediment and notes of wild yeast, this wine looks and drinks like a craft brew.
Find it at: Hop City Westside

Bellafina Prosecco ($9)
The cheapest bottle of our tasting came off to Grubbs as “shy and lean” on the nose, without any concentrated characteristics. “It’s definitely on the simpler side,” he said. He picked up lemon and pear and a little green apple and observed a “spiky” quality to the fruits, which usually indicates that they haven’t had much exposure to air. He found it drier than most standard proseccos, with tiny bubbles that fizzled out quickly. “This would be, for me, something easy-drinking. I’m not pairing this with anything,” he said. “This is the kind of thing I’d happily drink out of the bottle, though.”

Best for: Late-night party bubbles in a plastic cup. Ultra-basic and utilitarian, this is the LaCroix of sparkling wine.
Find it at: Kroger 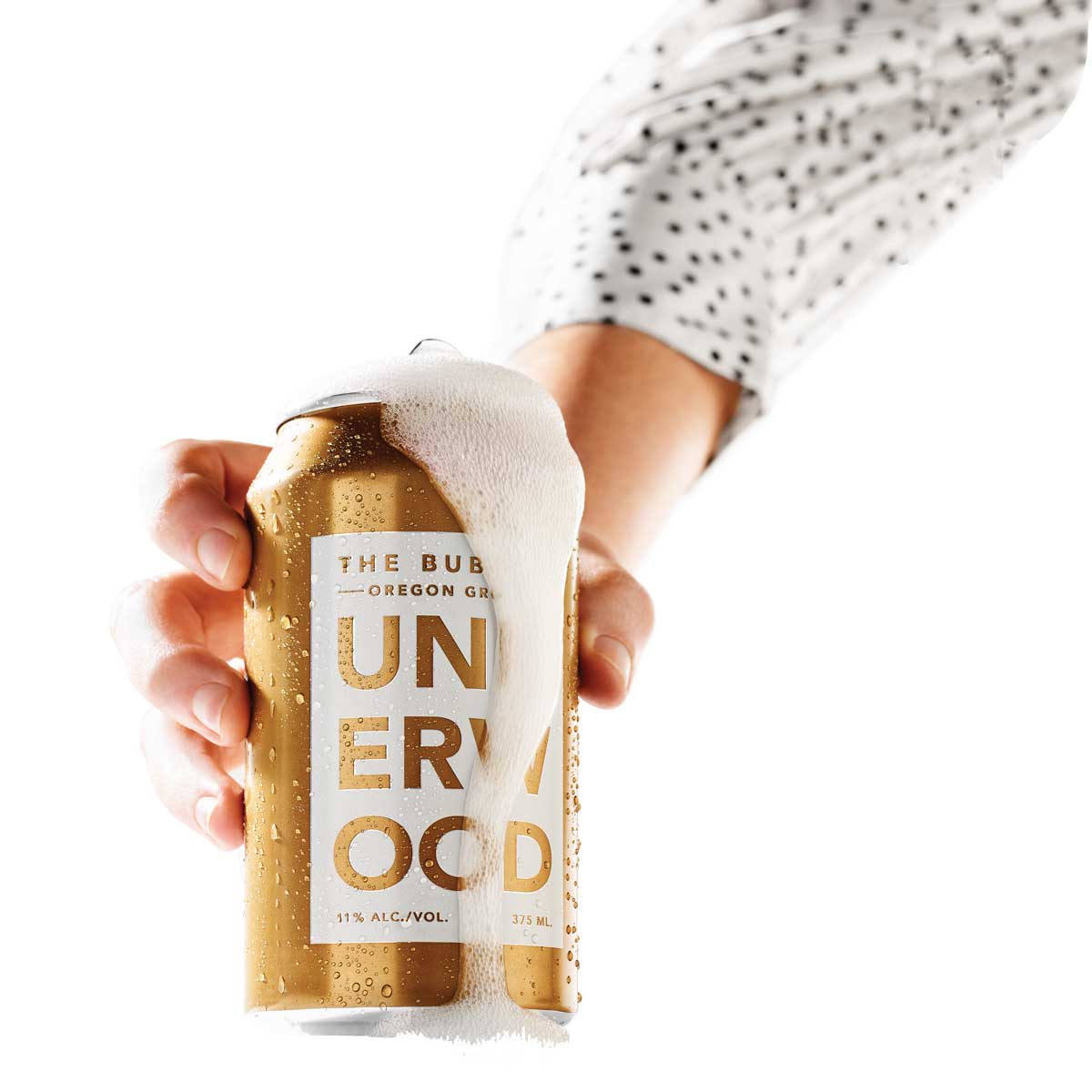 Underwood “The Bubbles” Sparkling Wine ($7 for 375 mL)
This wine was visibly fizzier than the Bellafina, with fruit aromas that Grubbs described as “a little less high-toned”—the apple notes more red than green. Upon first pour, the nose gave off a slight, undesirable whiff of sulfur. (Also worth noting that this one comes from a can: great for portability, but not quite as festive to open.) Grubbs liked the balance of acid and sugar, which he said makes it taste juicy but not necessarily sweet. There was also a little minerality present: Grubbs detected limestone, which he said lends depth and complexity to the wine. “This is a higher style of wine, for sure. This is a little bit more grown-up.”

Best for: Toting along to a casual dinner party. Unlike the two before it, this wine could actually stand up to food: Grubbs said he’d pair it with scallop crudo or Kumamoto oysters.
Find it at: Whole Foods

G.H. Mumm Cordon Rouge Champagne ($33)
This was the priciest wine of our haul, and Grubbs could tell right away: He said that its ripe fruit notes are more developed and taste slightly aged, likely from oxidative techniques to soften the wine and add balance. As a result, the flavors melded together more harmoniously than the “spiky” notes of the Bellafina. He also picked up interesting characteristics like mushroom and sea salt. “I think the winemaking here is more involved,” he said. “They’re taking their time in crafting it.”

Best for: Impressing your boss, your in-laws, or your friend with great taste in wine. This bubbly is worthy of a food pairing, too, and could even stand up to a main course. Grubbs said he would drink it with roasted chicken or pork tenderloin.
Find it at: Hop City Westside