Home Uncategorized Your next wine obsession: bubbles from Germany 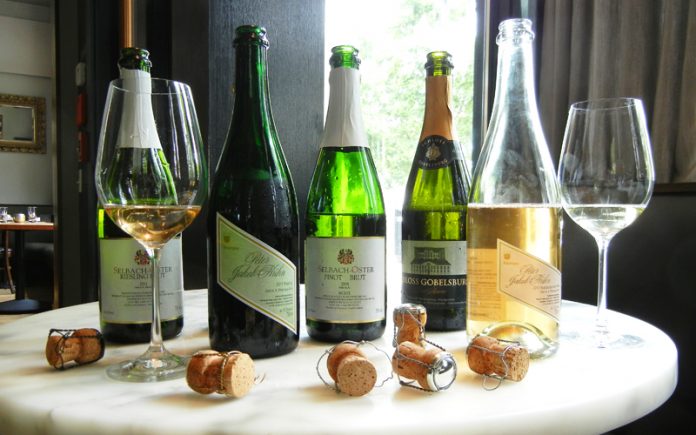 Germany is a notoriously difficult wine region to understand. Good luck deciphering Geheimer Rat Dr. Bassermann-Jordan Deidesheimer Hohenmorgen Riesling Trockenbeerenauslese. Yeah, I’ll just take a Pinot. And then there’s the Riesling issue. The country’s signature grape varietal, often accused of being too sweet, has yet to sync with the American palate, despite relentless nationwide campaigns and marketing pushes.

But there is a way to dive into German wines—great German wines—without having to buy a copy of Rosetta Stone, memorize a map, or fork over a ton of cash: go sparkling.

Sparkling wine accounts for 31 percent of Germany’s total production, most of which gets sipped at home (Germans drink more sparkling wine per capita than anyone else). Yet little makes it out of the country; the first time I ever saw one on a wine list was last month at Cakes & Ale. Available by the glass, the 2011 Riesling Sekt Brut from Peter Jakob-Kühn packed all of the tart fruit, crisp bubbles, and refreshing qualities I associated with Champagne.

“The drinking population as a whole in the U.S. just hasn’t discovered yet how magical sparkling wine is with food,” says Jordan Smelt, the restaurant’s sommelier. “And that’s because pop culture has dictated for so many years that it’s strictly for celebration. I got married. I won the World Series. My kids are finally out of the house. It’s our 50th anniversary. Sparkling wine is for so much more than that.”

And sparkling wine made from Riesling makes a great deal of sense. The varietal has excellent acidity and tartness and thrives in cool climates like that of Champagne. The perceived sweetness from the grape’s residual sugar works in the context of sparkling wine and Champagne, which are bottled with varying amounts of sugar (called dosage) anyway.

At the wine shop at Cakes & Ale, Smelt stocks several German sparklers (and one from Austria) that retail for under $40 a bottle. They’re worth trying—not just because they’re delicious, structured, and food-friendly, but also because they’re superior replacements to Spanish Cava and Italian Prosecco, which fall short at the same price point.

Five pours worth checking out

Peter-Jakob Kühn, Riesling, Brut 2011
A striking aroma with notes of banana, pears, and apples. Pair with something salty and spicy, like a steak dish with potatoes, corn and hot chiles, or Chinese food. $34