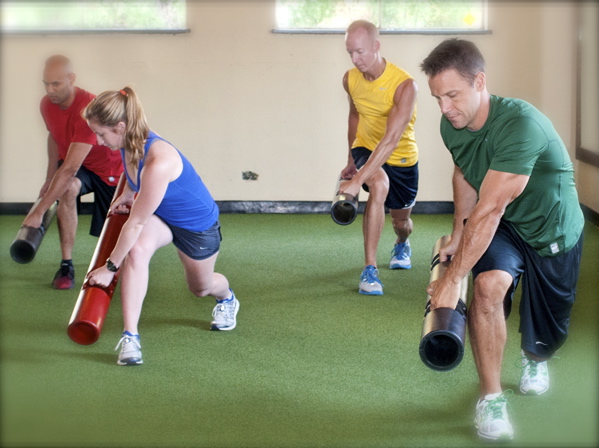 My fitness regime for the past five weeks hasn’t involved pumping iron or running on a treadmill, or even exercising outside in this magnificent early spring sun (it was sunny and spring-like when I wrote this, at least). But it’s been one of the most fun and effective fitness routines I’ve ever tried, and—in case you missed my last post—the list of workouts I’ve tried is long and weird. Here’s the thing, though: This particular routine has involved a four-foot long rubber pipe with handgrips called a “viper” (which supposedly stands for vitality, performance, and re-conditioning but could as easily mean vicious, insulting piece of ergonomic rubber). I swore I’d never work out with objects that have silly names. But my girlfriend dared me.

Wellco’s web site, as far as I could tell, made no mention of vipers: “Our unique training philosophy progressively challenges the body through a focus on multi-directional movement skills, speed, agility, quickness, reactivity, balance, and whole body strength and power to create greater kinesthetic and neuromuscular communication within the body.” That’s all good and well, if a little abstract. But at my first class—only a half-hour long, an exception made just once a week (all other classes are sixty minutes)—I found myself gripping one of these viper things and being asked to twirl it around my head, thread it through my legs, dance it across the floor, and thrust it through the air. Doing so, I was moving and balancing it in ways that worked muscles (many in my back and shoulders) I didn’t know I had. It was hard and, as is my genetic tendency—my grandmother took sweat-suppressant pills in the pre-AC south—I sweated a ton. The chipper instructor watched, kindly mopping up my perspiration, calling out the moves. Some of them, I must say, were hard for me to get the hang of—more due to the multi-step choreography than the viper’s weight: The movements felt overly complex. But I’m not a very good dancer.

Vipers come in six different weights—nine to forty-four pounds—and I was using one in the twenty-five pound range. But they aren’t the only fancy tools at Wellco: There’s a mini-rock wall with handholds for pull-ups, weighted balls, tension cords, TRX suspension straps, and probably things I haven’t yet seen. The workouts change every day. Plenty are done with just body weight, too: lunges, squats, burpees, boxes, rotations, push-ups, knee-hugs, tantrums, touch-touches, skaters … all performed in rapid succession, with lots of encouragement but little rest, as music drowns out the grunting and chatter among the super-fit. Class attendees get to pick the music (from Phoenix to Ludacris), if not the method of aerobic torture.

Well, it was torture at first. But three weeks in, I started noticing a full-body kind of strength that I’ve never felt. I hadn’t been running for weeks, but when I finally did I seemed faster and more flexible. I could more easily out-wrestle my pit bull, too. And that’s sort of the point: Wellco’s goal is to do functional exercise that will help with real-life activities. (Sorry guys, but the bench press isn’t functional. I wasted years doing it, too.)

Co-founders David Mauer (who has managed or owned a number of Atlanta gyms over the last fifteen years) and Reyci Martorell (an Emory graduate with a masters in education and a half-dozen other fitness certifications) are the viper-loving madmen who created and opened this place in January of 2012. Actually, they’re very nice guys, and a big part of what keeps me coming back is that there’s a likeable leader (which wasn’t always my experience at other cross-training gyms, like Cross-Fit). The expense may be prohibitive to some, but it’s also an incentive to get in the bright, cozy, clean studio and work out often. If you go five times a week—my goal, not yet achieved—it’s actually a pretty good deal. And you get used to the vipers faster.

Small group training classes are offered for eight participants at a time, and fill up quickly. Reserve a class online a few days in advance. (I was put on a waiting list more than once, though after someone else cancelled, I always made it in). Wellco is open six days a week. Eight sessions—beginning at 5:45 a.m. and ending at 7p.m.—are offered on weekdays, while Saturday classes occur at 9, 10, and 11 a.m. The first three small group sessions cost a total of $10; thereafter it’s $139.99 per month, with a three-month minimum commitment required. Wellco is located in Virginia-Highlands, in Urban Body Studios. 404-919-1008 / 730 Ponce de Leon Place / wellcostrength.com