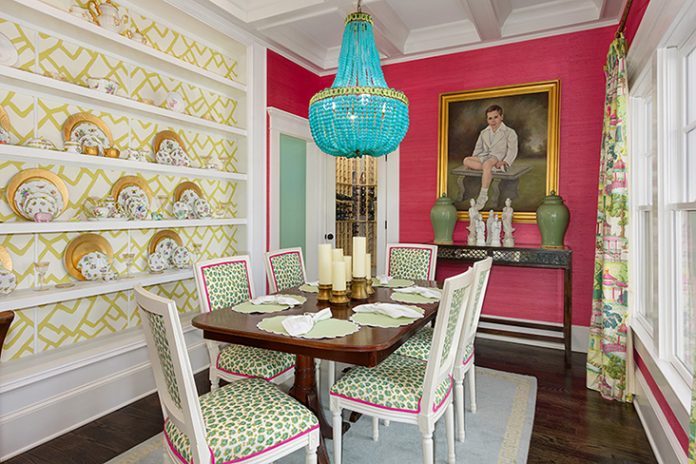 The 1980s-era house Jenna Buck Gross and her husband, Caleb, purchased in Decatur didn’t quite have the architectural charm of older bungalows on the street, so they gave it a two-part makeover: First, tear down some walls, add molding, and redo the floors and kitchen; then make the whole house come alive with color. Hot pink grass cloth and a turquoise chandelier are just two examples of the goings-on in the dining room; chartreuse wallpaper on another of its walls and green leopard print on the chairs (with pink piping!) round out a decidedly different approach to what is a stuffy room in many homes.

“I understand that people like the look of neutrals, but it just doesn’t make me happy,” says Jenna, an interior designer and mother to Mary Jennings, three, and Lottie, one. “I 100 percent believe that people’s surroundings affect them.”

Growing up in Columbus, Georgia, Jenna was fascinated by her grandmother’s elegant house, particularly its touches of Asian-influenced fabrics and accessories. Every room in the Gross house has a bit of chinoiserie as well, from the Schumacher Chiang Mai Dragon fabric in the family room to bamboo chairs and mirrors.

After Jenna worked briefly in the fashion industry, including a job at Marc Jacobs in New York, she and Caleb, an attorney, settled in Decatur. Her business, Colordrunk Designs, has thrived there, especially after her home was featured on TLC’s Four Houses.

Jenna points out that adding color can be an inexpensive way to add personality to a room. “You don’t have to spend a lot to get these pops of fun,” she says. HomeGoods and Target are two of her favorite sources, although she’s a big fan of the splurge-worthy Jonathan Adler store, too. Her design philosophy: Have as much fun with your house as you do with your wardrobe.

Quick tips
You can mix patterns—stripes and florals, for instance—if they are linked by a common color, says Jenna.

The easiest way to experiment with color is throw pillows.

“Pick your favorite color and add some of it to every room in your house,” she says. Jenna used Benjamin Moore’s Wythe Blue on her front door and has a bit of it in every room.

This article originally appeared in our April 2014 issue under the headline “Colordrunk.”