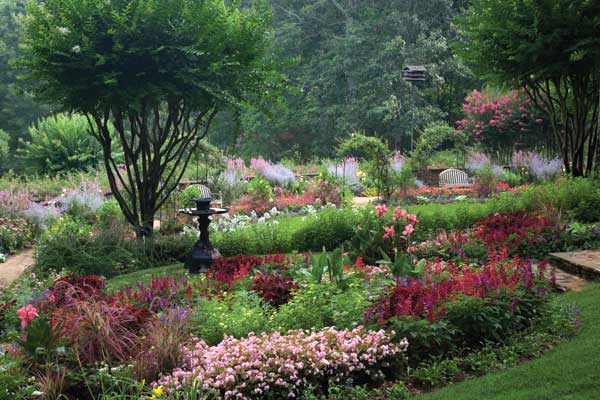 When Gibbs Gardens opens this month near Big Canoe in Cherokee County, it is bound to be an overnight sensation—even if it was more than thirty years in the making. Jim Gibbs, founder of Gibbs Landscape, one of Atlanta’s largest landscape companies, has spent a good chunk of his personal fortune and decades of patient cultivation preparing for just this moment.

Though Gibbs, age sixty-nine, is a national award–winning landscape designer and horticulturist, twice honored at the White House, his masterpiece is no academic botanical park with labeled rare specimens. This 300-acre property, his family’s residence since 1987, was designed purely for pleasure. There are twenty-two reflecting ponds, countless waterfalls and bridges (including a wisteria-draped replica of Monet’s bridge amid 140 varieties of water lilies), a wildflower meadow, a sculpture garden (with bronzes of Gibbs’s grandchildren), seven terraces of annuals and perennials, a fairy-tale-like fernery, acres of hydrangeas and rhododendron, allées of crape myrtles, river birches, cypress, maples—and a twelve-foot arbor entwined with New Dawn roses that coat footpaths inches-deep in petals. In all, Gibbs’s creation is a painstakingly choreographed procession of lavish floral displays tempered with calm refuges of natural beauty. It is the Fantasia of public gardens.

Gibbs’s dream began in the early 1970s, when he traveled to Asia after helping Dorothy Fuqua design her Japanese-style grounds on Tuxedo Road. Inspired by the culture’s spiritual approach—where every rock, plant, ornament, and position has eternal meaning—Gibbs set a goal of creating a “world-class” Eastern-style landscape of his own. After decades of patient bonsai-ing and a five-year search for just the right stones, Gibbs’s forty-plus-acre Japanese garden—believed to be the largest in the nation—now serves as the heart of this new horticultural destination.

Already as many as 20,000 garden club members have visited in a single year—and this without public restrooms. The new facility has a visitors center, parking, gift store, and cafe (serving sandwiches on melt-in-your-mouth homemade bread by local sensation Mary’s Bread Basket). “We’re prepared,” says Gibbs, who planned from the very beginning to open his homesite to the public. “We’ve been here lots of times when people were looking in the windows.”

Gibbs’s passion—he took lichen samples to the paint store and measured the dimensions of the bridge at Giverny with his own plumb lines—embodies a generations-deep Southern devotion to gardening. (His grandmother famously once asked for a truckload of horse manure for Christmas.) Fittingly, the grounds’ opening spectacle is dedicated to his mother, Margaret Anderson Gibbs: fifty acres of hillsides carpeted by millions of daffodils. Every year, Jim says, his mother would usher in spring with a Wordsworth poem: “When all at once I saw a crowd, a host of golden daffodils / Beside the lake, beneath the trees, fluttering and dancing in the breeze.”

This article originally appeared in our March 2012 issue. 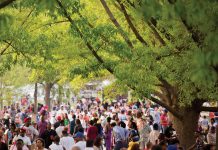 10 Atlanta home and garden events to see this spring 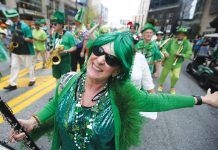