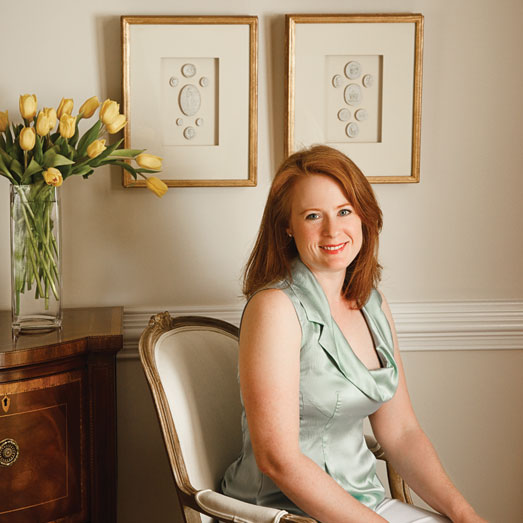 Many blogs have grown out of stores, but Quatrefoil Design is a store that grew out of a blog. Launched last October by Holly Street, author of Things That Inspire, this online venture specializes in hard-to-find intaglios—tiny, cameolike plaster engravings depicting classical scenes and characters. When Street first posted about intaglios back in 2007, framed groupings of the nineteenth-century collectibles were just starting to appear in home and garden magazines and designer showhouses. Street, who writes about interior design, architecture, and art, immediately recognized them as “the perfect combination of sculpture and art.”

An avid “mommy blogger” with an international following, Street considered opening a store. But the former Big Four consultant shied away from the daunting investment of time and money required by bricks and mortar. Leveraging her business and technical experience with her passion for design, she found it relatively easy to enter Internet commerce. She and a friend, whom she jokingly calls her “product consultant,” located an artist and created a line of affordably priced reproductions (from $225, easily half typical showroom prices). In just a few months, the store has garnered upwards of a hundred daily online visitors and revenue in the “significant five figures”—certainly more than Street ever earned off Things That Inspire, which does not accept advertising. She is exploring other product lines, such as architectural renderings, pillows, and calligraphy.

“People feel like they know me because of the blog,” says Street. “The store doesn’t feel like some random, fly-by-night Internet site. They know my aesthetic and my taste.” An “early adopter” who followed blogs back when they were just online diaries, Street attracts some 70,000 site visits monthly—a loyal community that shares her enthusiasm for esoterica such as groin vault ceilings, chevron floors, and encaustic art. “I feel like I was made to blog,” she says, sounding a bit like Julie Powell gushing over Julia Child. “I didn’t have many other people in my everyday life who noticed what kind of faucet was in a bathroom or what kind of knob was on a door, and it was really gratifying to find there are people out there who are interested in some of the things that I’m interested in.” quatrefoildesign.com, thingsthatinspire.net

The Peak of Chic
Jennifer Boles’s blog just keeps getting better—whether she’s sharing her own travails with a dated bathroom or drawing inspiration from vintage design magazines. Though obviously on trend, she’s not afraid to champion neglected features such as window valances or linoleum. We especially love classic movie references, such as a recent post on upholstered doors in Lost Horizon. thepeakofchic.com

Style Court
Courtney Barnes’s design blog, online since 2006, has inspired many others and drawn attention from Elle Decor, Domino, and Southern Accents (remember them?). A former docent for the High Museum of Art with a master’s degree in education, Barnes has an eye for inspiring spaces and writes authoritatively about topics from Thai paper to sterling silver. stylecourt.blogspot.com

Mrs. Howard: Personal Shopper
Unlike most retail blogs, this one from two related Galleries of Peachtree Hills shops—Mrs. Howard and Max & Company—offers more useful advice than sales pitch. Regular features such as before and after photos, top ten lists, and Q&As with designer Phoebe Howard temper promotional features on new arrivals. mrshowardpersonalshopper.com

This article originally appeared in our June 2010 issue.