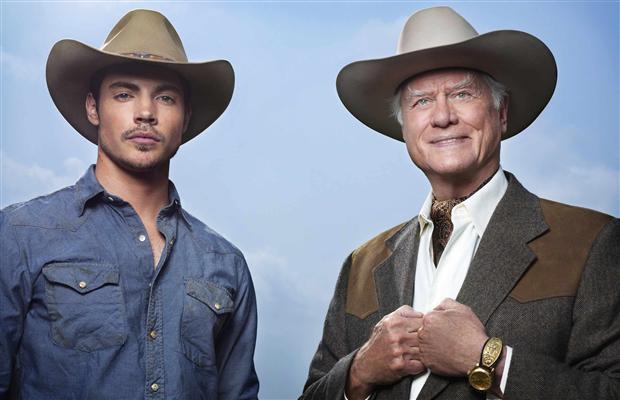 TNT pulls off the seemingly impossible with its stylish relaunch of the “Dallas” franchise debuting Wednesday night at 9 p.m.on the Atlanta-based basic cable drama network — it immediately sucks you back into the original show’s nonsensical whirlpool of greed, illicit affairs, oil and real estate. But it’s a guilty pleasure with a legacy and soul. There’s something for everyone here: J.R. Ewing (still played with barely contained glee by Larry Hagman) is 80, debilitated by depression, is staring blankly out the window of a nursing home (or is he?!), Miss Ellie’s favorite son Bobby (Patrick Duffy) has a new wife Ann (Brenda Strong, best known for playing a corpse on “Desperate Housewives” for seven seasons) and a mysterious soap opera medical malady while Bobby and J.R.’s grown boys John Ross and Christopher (also played by “Desperate Housewives” vets Josh Henderson and Jesse Metcalfe respectively) can’t seem to keep a civil tongue in their heads or clothes on their gym chiseled bodies. This is a soap, after all (our advice? watch the two-hour premiere with friends and do a shot every time a character hisses the word “email”. . .). But in 2012, J.R. Ewing, TV’s most monstrous misogynist since Roger Sterling was knocking back three-martini lunches, has a female boss, executive producer Cynthia Cidre.

Rather than take her cues from other reboots of beloved TV shows (there is no techno remix of Jerrold Immel’s majestic “Dallas” theme, for example. The original theme and the show’s sweeping yellow trademark “Gone With the Wind”-esque credits are intact as reminders that prior to the era of lackluster opening credit crawl (that has since become an industry standard), TV shows used to announce themselves grandly. The returning “Dallas” vets, Duffy, Linda Gray as Sue Ellen, J.R.’s ex, John Ross’ mama and potential Texas gubernatorial candidate (gulp), and of course, Hagman himself, aren’t used as superficial set dressing either. They’re hardwired into the intergenerational dysfunction. But this time around, Sue Ellen and J.R.’s spawn, budding oil baron John Ross and Bobby and Pam’s adopted son, the green-minded alternative energy advocate Christopher, are the ones squaring off over Ewing Oil, the family’s iconic homestead South Fork (which, in the age of the overwrought McMansion, looks more like Graceland) and, naturally, gorgeous women. Other “Dallas” mainstays, including Charlene Tilton as Lucy Ewing, Steve Kanaly as Ray Krebbs and J.R.’s arch enemy Cliff Barnes (played, as always, with oily abandon by Ken Kercheval) also turn up in this TNT continuation of the saga.

In an exclusive conference call with Atlanta magazine, Larry Hagman and Josh Henderson dish on their father-and-son dynamic and one deliciously close shave the pair share in the coming weeks.

Hagman: Where in the hell are you?

Hagman: Oh, hell, no kidding?! Well, wonderful! I used to direct down there in Covington when we shot [the CBS TV series] ‘In the Heat of the Night.’ Good to talk with you.

Atlanta magazine: Mr. Hagman, you’re one of the most handsomely paid actors in the history of television…

Atlanta magazine: After 357 episodes, spanning from 1978 to 1991 and 13 seasons, what drew you back to this show and this character?

Hagman: Well, working with Patrick and Linda, for starters.

Atlanta magazine: After more than 350 episodes of backstabbing treachery, what remained unfinished with the character of J.R. Ewing from your perspective?

Hagman: Nothin’, really. I thought we had gone through everything we could. Now with the new show, I’m finding out there are lots of things I never even thought of!

Atlanta magazine: Josh, how daunting was it as an actor to join a well-oiled ensemble of actors consisting of Larry, Linda and Patrick, who had worked for three decades together on a show before you were born?

Henderson: It was a combination of things. It was a little intimidating for sure but very exciting for me. I’m from Texas. This show meant a lot to my family. When I heard the show was being brought back, I just wanted the chance to audition for it. It’s exciting and surreal for me, being from Dallas. I get to go home and portray the son of the biggest TV villain of all time and go home and shoot a show that put my city on the map.

Atlanta magazine: Larry, avid viewers of the original series will recall exactly how terrible J.R. and Sue Ellen were as parents of little John Ross. At the end of the show’s run, viewers were left to wonder just how screwed up John Ross was going to turn out. This relaunch provides the answer, doesn’t it?

Atlanta magazine: In the third episode of the new show, J.R. and John Ross share a unique father-and-son bonding moment in a high-end Dallas barber parlor. Josh, before you shot that scene with your TV dad wielding a straight razor, did you inquire as to whether Larry Hagman was a Method actor?

Henderson: (laughing). No, I just trust and let Larry do his thing. I just try and jump on the ride with him. That shaving scene was a kick to shoot. I knew that intensity between father and son really works between us. It was actually pretty exciting to get in that chair and have the blade come out!

Atlanta magazine: How much fun was that scene to shoot for you, Larry?

Hagman: I loved every minute of it!

Atlanta magazine: There’s also a lot of winking to the audience in the writing of the new show. When Bobby’s new wife levels a shotgun at J.R. in one scene, thinking he’s an intruder at Southfork, J.R. tells her, “Bullets don’t seem to have much of an impact on me, darlin’.” What were your thoughts when you came across that line in the script?

Hagman: (laughing) That line got a good laugh from me too when I saw it! You know what? I had no idea how funny it was going to be until after we shot it. I just delivered the line straight, not knowing where the laugh was. But when I watched it, the writing really  works. It’s a damn funny line. I just didn’t know it at the time!

Atlanta magazine: The short hand that exists between you and Patrick and Linda on-set, did that come flying back to the three of you 20-plus years later?

Atlanta magazine: Josh, in the opening credits of the new show, you and Jesse trade off top billing every other week. That feels a little too functional for the Ewings, who used to throw each other in the swimming pool every other episode. Are you scared about sending the wrong message to viewers?

Henderson: We don’t think about in those terms. For us, it’s just great to be a part of such a great show and add another conflict to that J.R. and Bobby fight that was so juicy for viewers to watch. For us, it’s really about how can we add to that great conflict and those family issues the Ewings always had. We’re just trying to do our best.

Atlanta magazine: Mr. Hagman, TNT is now offering episodes from the original “Dallas” series on its iPad app and all 13 seasons are available on DVD sets for a new generation to watch. Are you pleased that a new generation is watching your work?