When author and television writer T Cooper moved to Atlanta from New York in 2014, he was surprised to learn about a unique event taking place in his new hometown. “Wait, the only transgender bodybuilding competition in the world takes place in Atlanta?” he laughs. “It was just so random.” The very first TransFitCon was held in Atlanta that year, and Cooper originally wanted to write a story about the annual bodybuilding competition. But as he started his research, he realized a documentary film could better showcase the “three-dimensional” story he wanted to tell. He spent the next three years crafting the feature-length documentary, Man Made, which closes out the Atlanta Film Festival this Sunday.

Man Made follows four transgender male bodybuilders as they train for the 2016 TransFitCon. Mason, a Cleveland, Ohio, resident, regularly competes in mainstream bodybuilding competitions and credits the sport with saving his life. Rese, from Atlanta, has a five-year-old son and is homeless when the film introduces him, later finding a home with his grandparents and exploring a relationship with a new girlfriend. Dominic, from St. Paul, Minnesota, recently underwent chest surgery and hopes to compete at his second TransFitCon with his new body. He also searches for another piece of his own identity: the identity of his birth mother. And Kennie, an Arkansas resident who is just beginning his transition, struggles to keep his relationship with his lesbian girlfriend, D.J., afloat.

Below, Cooper chats about what went into making the doc, telling trans stories that go beyond transition, and what he hopes viewers will take away from the film.

What made you want to tell this story?
As a transgender man myself, I loved the notion that there’s so much more to any identity than just one kind of label. I was really psyched to show varied, real, honest, authentic trans lives—with different body types, different stages of transition, races, classes, familial situations—all convening in one place and letting it all hang out on stage. And I was excited to tell trans stories that are not all about transition. Transition, in some ways, was the least interesting part of these subjects’ lives. I wanted to show a 360-degree view of their lives because I have a 360-degree life.

We all have these different ways that we present ourselves to the world, and [these bodybuilders are so brave]. That’s what drew me when I first went to TransFitCon—I couldn’t believe these guys could get up on stage in literally next to nothing, something I could never do even if I looked like some of those dudes. I was so fascinated by what it takes to step on stage in front of people and in front of the world and say, “This is me.”

You’ve made short films, but this is your first feature-length documentary. Was that intimidating?
If I knew then [when I first started this project] what I know now, I probably would have been more intimidated because I would have known to be intimidated. It’s been a steep learning curve. I had to learn how to shoot because I wasn’t going to have the kind of budget that would allow me to bring huge crews along with me [to follow subjects]. But once we shot the 2015 TransFitCon, I began to see how the story would come together and started to figure out who I was going to follow. I made a rough budget to keep the film lean and mean, and that meant I had to shoot most of it alone. I applied for grants and was very lucky to get one from the Sundance Institute, and I was really lucky to get [Madam Secretary actress] Téa Leoni as an executive producer. Making this low-budget indie doc was about keeping the train on the tracks and thinking about how I was gonna stay alive so I could spend enough time with these guys. There was so much happening in all their lives; I didn’t want to miss anything.

There are a ton of Atlanta influences in this film. The competition is based here and one of the main subjects is also from Atlanta. And you did all the post-production for the film here as well. How did all those local voices impact the film?
I really wanted to tap into the talent that is here in Atlanta and the enthusiasm here. I’ve worked in New York and Los Angeles, but there’s just something about the “we’re gonna get it done together!” kind of attitude in Atlanta that I just love. I was really lucky to find a local post house, Moonshine Post-Production, and an local editor, Charlene Fisk, who also was part of the film crew for the 2016 TransFitCon, so she had actually met and spent time with the subjects. Keeping it local just made the film better—everyone believed in it in a very grassroots way.

Tell me more about the symbolism behind bodybuilding. It seemed to be a way for these trans men to take control of their own bodies and create their perfect self-image. And it’s also seen as a very traditionally “masculine” sport.
[In our culture] there’s this masculine ideal, but whatever that “ideal” is is very different for every individual in this film, and representations of masculinity are as varied as each individual who is embodying it. It was important for me to show for me that there’s not one version of masculinity that’s rewarded and celebrated, and not everyone is trying to obtain [the same ideal]. Everyone’s best version of themselves is subjective. [When the TransFitCon competitors] step on stage, that’s the best they can possibly be in that moment for them. The subjects are drawn to the sport for different reasons, but there’s something healing about it. It’s not about cutthroat competition; it’s about this competition with yourself and with human nature and nature itself, and with what the world is telling you that you are. Bodybuilding was really perfect metaphorically because I believe we’re all man-made; we’re all self-made. We all come out one way and end up another, and that’s the story of being human.

You mentioned that you wanted this story to show authentic trans lives beyond the transition story, which is a common narrative. And it seems like many of the themes in the film are very universal—breaking up, finding your own identity and self-worth, learning about your heritage, finding love.
I don’t see a lot of stories out there about people who just happen to be trans. Everything is about their transition and how it affects the people around them, often in an adverse way. I liked that idea of telling the stories of these men who happen to share a passion for fitness and bodybuilding and altering their bodies to look more like they want them, which is something we all do in a way. To me, the trans [aspect] of [these stories] falls away precisely because the journeys the subjects in the film take are universal. Take Kennie and D.J.’s relationship issues, for example. The source of conflict is specific to Kennie’s transition [D.J. is a lesbian and struggles with the idea of dating a man], but we all [go through those emotions in some way]. When you sign on to be in a relationship with somebody, God only knows what could happen down the road—someone could have a stroke or change their minds about having kids or decide they want to go back to college. I really liked the interplay of Kennie’s emerging identity [as a man] and D.J.’s very solid existing identity [as a lesbian] and how those things become so much at odds. There’s not a person in the world, I don’t think, who can’t relate to having a partner change and how much you’re willing or not willing to go along with that.

I’ve heard some feedback from trans folks who’ve seen the film and were like, “Oh thank God there’s a story that’s not only about taking hormones and getting surgery and telling people.” Of course those things are part of these subject’s lives, but it’s not everything, and I just felt so happy and lucky that they welcomed me into their world [so I could show that].

How is this film important in the current political climate, and how did you reflect the current political discourse in the film?
I think these stories are more important now maybe than ever, especially with the trans movement. But the rights of so many people are being attacked and rolled back, not just trans rights. So I hope it comes across that these guys are just trying to live their lives, and yet even just living is being threatened. Allison [Glock, an occasional Atlanta magazine contributor and Cooper’s wife] and I were mindful of the politics [as we co-wrote the film]; we talked about how to peg [events in the film] to [current events]. There was a lot of stuff we couldn’t include, a lot of protests. But we did want to include the fact that one of Rese’s friends, a trans woman, was murdered, and she was just one of many trans women murdered that year. [The film also features protesters at the 2016 Atlanta Pride Trans March.] It was important to have those things alluded to, but the last thing that I wanted this documentary to be about is how you should feel bad for trans people.

What are some of the major things you hope people will take away from this film?
It’s not meant to be a lesson, but I think this film is capable of building empathy toward our way of approaching people we might not necessarily understand. If people are moved, if they laugh or cry, and if they are open to lives that are different from theirs, that’s a win right there for me.

See the film: Man Made has its world premiere on Sunday, April 22 at 9 p.m. at the Plaza Theatre. Tickets are $10. Find more information at the Atlanta Film Festival’s website. 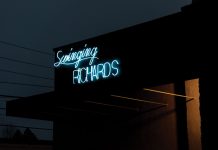