To Stephen Kearse, Atlanta is the perfect setting for the absurd. A critic and nonfiction writer for publications such as the New York Times Magazine, Pitchfork, and the Ringer, Kearse grew up in Riverdale. His debut novel, In the Heat of the Light (Kindred Books/Brain Mill Press), comes out August 6 and follows an Atlanta graffiti crew that, in the wake of a friend’s death by police violence, defaces Stone Mountain. But as two FBI agents start investigating the crime, the crew’s relationships start to fray, culminating in an explosive climax.

The playful, techno-inflected thriller is full of the textures of the city: the stickiness of Waffle House tables, the post-apocalyptic landscape of Old National Parkway in Clayton County, the gleaming bike lanes in Old Fourth Ward. Heat—from the initial scorching of Stone Mountain to the chapter titles that note the summer temperature outside—is woven throughout, as is Atlanta’s nostalgic history of Gone with the Wind–style Southern charm and its current chapter of gentrification and displacement. We talked to Kearse about the inspirations behind the book, Atlanta’s mythology, and why the phoenix—the symbol on Atlanta’s city seal—is a “weird” metaphor for the city.

What made you, someone who predominantly writes nonfiction about music and culture, want to write a novel set here?
Well, one of the origin stories is that I was trying to write short stories, and some friends—we just didn’t have the language of soft, constructive critique—were like, “You’re trash, man. Just stick to music reviews.” [Laughs.] So, I wanted to prove them wrong. But the other thing was, when I left Atlanta—first, I went to school in New York, then, I settled in D.C.—I didn’t realize how singular of an experience Atlanta was, especially as a black Atlantan. There are black people doing pretty much every profession here: postal workers, doctors, dentists. And that’s not the case in other places I’ve been to; it’s a little more singular. And I think it’s just one of those places that doesn’t really have that much of a mythos in the larger American imagination, the way New York or L.A. does. It’s a blank slate in some ways. The things that come to mind about Atlanta for people that aren’t from here are strip clubs, Real Housewives, the airport, Buckhead—things are so unrelated to my experience. And it almost emboldened me to throw my dart at the board with the book.

In the book, you associate “Old South” Atlanta with the rapid change that’s currently facing the city—describing a graffer tagging over another artist’s work as, “She was going to Sherman this motherfucker,” or the scene of Ponce at night: “They brushed shoulders with a homogenous mob of thirty-year-old white dudes who were desperately fighting to return to their twenties . . . sentient border disputes, Civil War reenactors forever loyal to the Confederacy of youth.” Why was it important to connect those ideas?
It’s because of the way parts of Atlanta are being erased, replaced, or totally evaporated—“dehistoricized” is the academic term. There’s still this structural way in which it happens, in which people deny it, or they latch on to vague signifiers of the past, or criticize newcomers in a way that doesn’t acknowledge their own role in displacement. (Reading Clarence Stone’s Regime Politics and Atlanta Studies blogs inspired a lot of these themes, too.) I visit Atlanta every summer, and I saw how, in real time, the city was being rewritten. And that was jarring to me: seeing prices go up, the redevelopment of places like Ponce City Market. The way I heard people talk about the city changing had these undertones of, “This place is better now. It was inhospitable before.” That really grossed me out, and made me want to slash those understandings.

Hacking and graffiti felt like the right vehicles for that, because both of those cultures are thinking about access and agency. When you graff, you’re actively going against the way the city is supposed to be, what it’s supposed to look like. You’re imposing your will on it. In a larger way, Atlanta itself is kind of like that: As much as all of the structural forces of racism, classism, are going on, people still find a way to thrive.

This book sits somewhere within the noir/hardboiled/thriller genre, and also employs a lot of absurdist humor—the way a lot of this city’s great art, like FX’s Atlanta, has. What made those forms the right vehicles to get at these issues of racism and displacement?
The book is full of shields of dissonance that we put up—the idea that we just live through tragedy, even though we’re deeply affected by it—and the best example is Tilly, [the FBI agent who starts investigating the graffiti crew]. She’s a black FBI agent, which is just a pretty fraught idea to me. In reality, the FBI does have disparities of representation, and it’s tied to the history of organization: They antagonized lots of civil rights organizations and radical groups. Tilly’s kind of living through that and represents the way we often sit at the intersection of all this weirdness.

The other thing is, while I appreciate the canonical, literary fiction, I think that plottier, pulpier fiction is just as useful for asking deeper questions. I drew from a lot of different places for this book: X-Men comics, the movie Attack the Block, manga.

Why did you choose to make heat—each character’s relationship to it, the temperature markings in the chapter titles—such an important motif in the book, particularly at the end, which involves mass destruction?
I didn’t realize how much I loved Atlanta’s heat until I moved somewhere that had genuinely cold winters. And it just made me realize that heat really structures how people go about their day. It matches people’s mood in a way—and it’s also a reference to Do the Right Thing [Spike Lee’s classic 1989 film]. But I think heat creates the sensation of pressure—pressure that could explode at any moment. And we have a whole season of that. There’s not one exceptionally hot week in Atlanta; “heat wave” is a season. And we spend a lot of time trying to escape from it.

For the end of the book: I used to do this joke, when I did stand-up, that the best scene in Gone with the Wind is when the city is on fire. And it’s funny, because, in the movie, it’s seen as this tragedy that ruins society. And I’m like, no, it’s the flame of liberation! [Laughs.] But I was also thinking about how, in our moment, “burn it all down” has become a rallying cry. Sometimes, there’s a lack of imagination to that; burning it all down often involves not thinking through the details—the people adjacent to you, your intimate relationships.

It’s also just making manifest the kind of slash-and-burn ideas that are behind gentrification. The phoenix is on the seal of the city—that’s kind of weird to me, this idea that the only way we will be renewed is if we’re destroyed. But it’s something that is embedded in a lot of beliefs about change. What is the reality of this metaphor? Who do we have to become to really enact that? 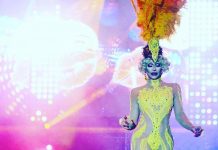