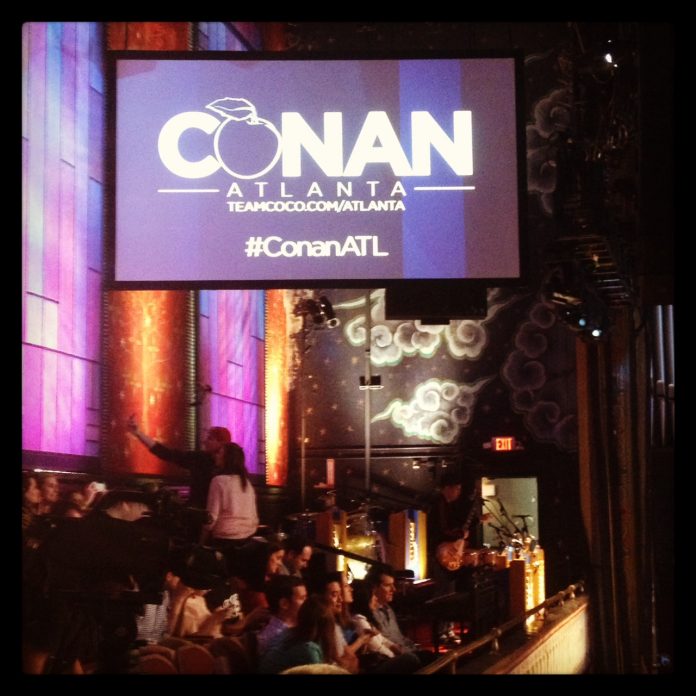 “I want to welcome everyone who couldn’t get a ticket to tonight’s Braves game,” Conan O’Brien told a cheering audience Monday afternoon at the first Final Four week Atlanta taping of his TBS “Conan” late night show at the Tabernacle downtown. Longtime fans like Jas Chahal and Stephanie Kasper, who had won their tickets through the TeamCoco.com website, had been milling about on Luckie Street all day. Chahal had driven up from Orlando for the occasion and from their second row seats, they had orange signs reading “ATL Luvs Coco” and “Conan Hug Me” signs at the ready (note to fans attending this week’s shows at the Tabernacle: the show’s stage manager requests that the audience refrain from displaying your Conan love signage since it will interfere with the cameras swinging around capturing the show in progress).

Down the street in Centennial Olympic Park, fans snapped selfies in front of a large TBS planted inflatable basketball adorned with Conan’s orange pompadour. On stage, O’Brien explained his east coast relocation thusly: “My bosses at TBS here in Atlanta told me I could do a week of shows anywhere in the world. So I told them, ‘Paris, France.’ And they said, ‘Atlanta it is!'”

Delta Airlines arrival times, Tyler Perry‘s, um, prolific body of film and Chipper Jones‘ off-field dalliances also made it into Coco’s monologue as did our city’s strange late-night habit of becoming belligerent over smothered, covered and chunked foodstuffs. “I’m only here for four shows,” O’Brien assured the audience. “But I promise you this — I will not leave this city until I get into a fistfight at a Waffle House.” Added sidekick Andy Richter: “You better be shirtless!”

In a taped piece, O’Brien traveled to The Greater Travelers Rest Baptist Church in Decatur where he attempted to show off his gospel singing abilities with choir director Greg Kirkland, Jr. and his talented singers who closed out the segment by showing up live in the aisles of the Tabernacle and singing a dancing O’Brien into a commercial break.

During breaks, O’Brien sipped from a bottle of Dasani water a stage hand kept for him, chatted with Richter, temporarily removed his dark suit jacket in the blazing hot theater and engaged in some jumping jacks as the band pumped through Curtis Mayfield‘s “Move on Up” in the balcony. The show’s crew, meanwhile, skillfully unrolled an oriental carpet, moved in Conan’s signature desk and microphone, an olive and gold ornate couch and a pair of silk flower arrangements for the Seth Rogen interview segment all during a commercial break.

A tip: If you’re watching from home this week and you have a tablet, download the TBS Team Coco app and click the sync function as you watch the show live at 11 p.m. Fans who attended that day’s taping are on posting messages and fun insights and the show’s interactive team posts hilarious GIFs as you watch.

A note for the fans who have snagged tickets to one of this week’s tapings: You may pick up your tickets and wristband anytime throughout the day from 9 a.m. to 4 p.m. in the big white tent on the right side of the Tabernacle. All tickets are reserved with seat numbers so when the doors open at 3:45 p.m., the line moves as swiftly as it does for any other Tabernacle concert. Be warned: Doors close sharply at 4:30 p.m. Monday afternoon’s taping began at 4:52 p.m. and Conan warbled the final bars of the “End of the Show Song” at 6:01 p.m. before giving one last wave to the crowd and jogging off stage.