The news arrived in bold, capital letters in the Georgia Journal, a Milledgeville newspaper, on August 1, 1829: Gold had been discovered in Georgia. Yankees, frontiersmen, freed slaves, and Europeans blinded by gold dust flooded the area by the thousands, intruding into Cherokee land, where they panned for gold in creeks. If they could afford boats, they dredged the bottom of the Etowah and Chestatee rivers. Investors followed and financed the construction of mine shafts as deep as 130 feet. Several years later, the General Assembly changed the name of Licklog, the county seat of present-day Lumpkin County, the epicenter of the Georgia gold rush, to Dahlonega—similar to the Cherokee word for gold—and even used some of the area’s gold to coat the Capitol’s dome. The federal government opened the Dahlonega Mint so prospectors could assay and exchange their finds—before its closure in 1861, it produced $6 million in gold coins—and began removing Native Americans as part of the Trail of Tears. But word of riches out west in California sparked an exodus. Still, panning for flakes has long been popular with tourists, and Dahlonega has two commercial mines that cater to visitors. 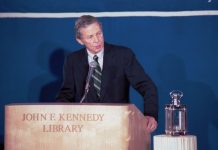 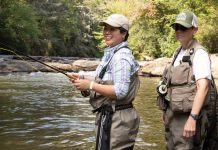 In the quiet waters of the Chestatee River, cancer survivors find peace with fly fishing