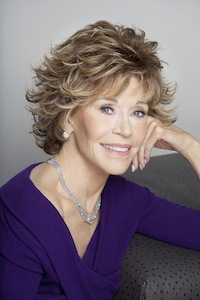 G-CAPP founder Jane Fonda‘s cinematic career will be encased in concrete this Spring as the two-time Oscar winner is honored at the 2013 TCM Classic Film Festival in Hollywood. The Atlanta-based cable channel tells Atlanta magazine, Fonda will be recognized in a public ceremony when the 75-year-old activist-actress sticks her hands and feet in wet cement in front of the TCL Chinese Theatre (since Fonda is starring in yoga DVDs for seniors these days, this likely won’t be a problem). Fonda will also preside over a special screening of her 1981 drama “On Golden Pond,” the film which won her father Henry Fonda a long elusive Best Actor Oscar for his role as Norman Thayer.

Explains TCM host Robert Osborne: “Despite her two Academy Awards, too little has been said and written about her work as an actress and all those amazing, top-tier films she’s made. Having Jane in person at the festival will also give film fans the rare opportunity to hear directly from the lady herself about her career, including her work with her father on the film ‘On Golden Pond’ and how the father-daughter relationship they portrayed on screen in many ways paralleled their own complicated relationship.” (As usual, Osborne keeps it classy and genteel. After many conversations with Fonda over the years, I can safely safe if Henry Fonda had treated me the way he treated his own daughter on-set, I would have re-written it as a murder mystery and titled the film “On the Bottom of Golden Pond”).

The 4th annual TCM Classic Film Festival will be held April 25-28 in Hollywood when 25,000 movie fans from across the globe are expected to congregate and completely geek out.

Closer to home, Fonda will be back on the big screen at the Plaza Theatre, February 2 at 3 p.m. when the iconic movie house hosts a screening of  the 1965 comedy-drama-western “Cat Ballou” starring Fonda and Lee Marvin, along with an appearance by “Lee Marvin: Point Blank” author Dwayne Epstein. The writer’s brand-new bio is “the first full-length, authoritative and detailed story” of the big screen tough guy’s often traumatic, um, often impaired off-screen life. A post-screening book signing will be hosted by the folks at A Cappella Books in the Plaza lobby. Tickets to the film are $5.

Between inaugural bashes in Washington D.C. this week, Atlanta rapper/actor/former Ryan Cameron Morning Show intern Ludacris was spotted making the rounds at Whiskey Blue at the W hotel in Buckhead. At the club’s Midtown sister nightspot Whiskey Park at the W in Midtown, former heavyweight boxer Evander Holyfield was reportedly “in great spirits” sipping a beer and giving the dance floor a work out.