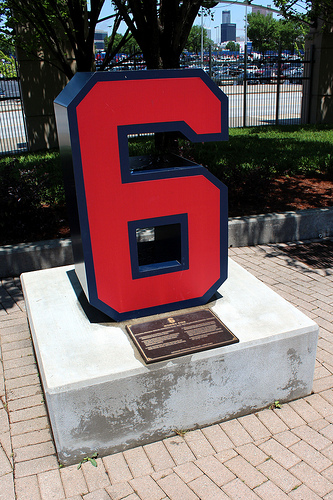 Ninety-one years of managing, 7,558 wins, seventeen pennants, ten Manager of the Year awards, and eight world championships were elected to the National Baseball Hall of Fame when the veterans committee unanimously cast their ballots for Tony LaRussa, Joe Torre, and Bobby Cox today. And Bobby carried his weight in every category.

Except the last one.

Haters, bottom-liners, and cynical Braves fans (are there any other kind, these days?), will say that championships are the only thing that count. They’ll argue that Bobby’s lack of hardware makes him the Lepidus of this triumvirate, an also-ran who couldn’t close like Torre (four rings) and TLR (three).

That’s fine if you want to take the simplistic approach. But a closer look will show that Bobby not only belongs on this Stone Mountain—he should be riding point.

First, neither Torre nor TLR had such an instant transformative impact on any of their teams as Bobby did in his first full season. Torre inherited a playoff team with a stable of young stars and baseball’s highest payroll when he put on the pin stripes in 1996. LaRussa wasn’t an overnight hit in Oakland, and he backed into the playoffs with an 88-win Cardinals team in ’96; it took three more years to build St. Louis into the perennial contender it is today. Cox took over midway through a 97-loss season and flipped that same team into a 94-win National League Champion in one year.

Second: Fourteen Consecutive Division Championships. Think about that. Alex Wood, born in 1991, found out Santa Claus wasn’t real and girls weren’t gross before he realized that someone besides the Braves could win their division. Once Bobby delivered the long-mired franchise to the garden, he kept them there. And then when that streak was broken, there were only four years (two of them winning seasons) of rebuilding before he took them back to the postseason.

In baseball, the playoffs are a crapshoot. So much rides on each play that one twist of fate or bad call (for instance … I don’t know … an infield fly?) can erase an entire season of work and success. After dramatic homeruns by Kirby Puckett in ’91 and Jim Leyritz in ’96, you could argue that Bobby was just two swings of the bat away from having as many championships as his fellow inductees and snuffing out that discussion.