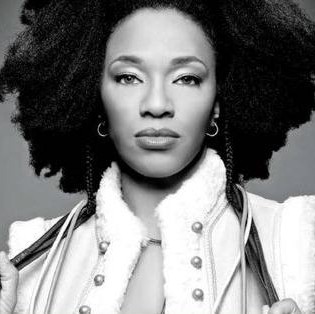 As of this morning, Atlanta singer/songwriter/baker supreme Doria Roberts is thisclose to scoring her dream gig — a live performance at next month’s 55th annual Grammy Awards in Los Angeles. Via its Facebook page, the Grammys folks have announced its “Grammy Live: The Gig of a Lifetime” contest. Roberts is a nominee in the South Atlantic competition. The winner and band will be flown to the left coast and offered a chance to perform in front of music industry A-listers on Grammy weekend.

After Roberts and her wife Urban Cannibals chef Calavino Donati mobilized their impressive fan base on Facebook and Twitter over the weekend, Roberts has now pulled into second place with just two days of voting left before a winner is announced. The singer’s fans can vote up to 10 times a day.

Based on the comments being left by fans on her Facebook page, productivity in some cubicles across the country may be drastically down this week.

Posted fan Sally Starrfield Monday night: “I have been voting for you from North Carolina and will continue to do so. Sending you the best vibes I’ve got (and mine are pretty doggone good!). Added fan Melissa Eikens: “Sending you good vibes from Indiana too along with my 10 votes a day of course!” Echoed La D’Acquisto: “Milwaukee is going to push it over the top tonight. Because that’s how we do it, Brewtown style.”

Normally, I wouldn’t endorse the notion of sharing one of our city’s most talented singer-songwriters with the likes of folks who never awarded Elvis Presley a competitive Grammy for rock n roll but saw fit to bestow a Best New Artist trophy on Milli Vanilli even as they nonsensically continue to reward Taylor Swift with Grammy hardware when, bless her follically enhanced heart, the poor girl requires a pitch pipe iPhone app to find the ladies room.

But hey, this isn’t my dream, it’s Doria’s. Besides, if she wins, she’ll no doubt get to hang in Los Angeles with Atlanta Grammy chapter senior executive director Michele Rhea Caplinger, a woman who consistently raises the credibility of the National Academy of Recording Arts & Sciences with her leadership and steadfast support of Georgia music.

In the age of AutoTune, Roberts selected a particularly daring video to post with her submission, too. Unlike most of the slick videos a lot of the participating artists in the competition submitted, Roberts posted a YouTube clip of her with her band performing the original song “Perfect” shot from the cheap seats on a hand-held video camera.

Offering an alternative video clip where viewers can actually see her in close-up, Roberts posted to fans: “If you’re having a hard time convincing your friends to vote for me because of the video I posted, share this one instead. I posted the one I did on the Grammy page because it was the only live, full band version of ‘Perfect’ I had on my computer. I didn’t want to submit a solo performance in case they just wanted bands to play.”

There’s another reason to vote for her. She looks out for her band. You don’t see that sorta thing on “Nashville.”