Home News & Opinion From the Magazine Single in the City

Crunching census data, cost-of-living figures, and
quality-of-life metrics, the Daily Beast ranked Atlanta number one on its list of “Best Cities to Find a Date in 2012.” But—with all due respect to statisticians—we turned to the real experts: actual single Atlantans. (Okay, a few married folk chimed in too. Not that we’re judging.) Here’s what the 280 respondents in our poll had to say about the state of singledom and the quest for romance in Atlanta.

Does Atlanta have a good dating scene?
YES
55%

“Picking up pizza from Antico, along with
Champagne, and going to Piedmont Park at sunset to eat. It was a time of year where the park was pretty empty. It was awesome.” —Description of the “best Atlanta date you’ve ever had”

SINGLE STAT
Contrary to popular opinion, there is no huge surplus of single women compared to single men in Atlanta. For every 100 women here, there are 95.4 men, not nearly as bad as the ratios in Winston-Salem (88.6) or Birmingham (88).

Do you want to settle down in the next five years?
YES
75%

BESTS AND WORSTS
A frequently cited plus of Atlanta’s dating scene is diversity. “Since Atlanta attracts lots of different types of people from all over the place (including myself), you can find someone who’s your ‘type’ just about anyplace you go,” noted one respondent. Women get points for being bold: “I’ve lived in numerous cities throughout the country, and Atlanta has the most aggressive women. Young and old!” noted another, who cited nightlife as the best thing about dating here. On the other side of the gender barrier, “Southern gentlemen” are a draw for one singleton.

Everyone’s biggest complaint? Traffic, of course. As one respondent griped, it’s “hard to safely get out to all the cool neighborhoods and get yourself home safely—without spending oodles on SafeRide.” Said another, even more frankly: “Meeting someone who lives on the wrong side of the highway can be a deal-breaker. Are they worth the traffic?”

MEN VERSUS WOMEN
Do you hope to settle down within the next five years?
Women: 76%
Men: 71%

Worst part of dating in Atlanta:
Woman: “Too many washed up frat guys in the bar scene.”
Man: “Too many Housewife wannabes.”

Best date:
Woman: “I met someone at Sister Louisa’s and it turned into this incredible six-hour-long date full of some of the best conversation I’ve ever had. We moved to cocktails and dancing at Sound Table and ended with late-night slices and some great good night kisses.”
Man: “Homemade dinner, pregame at CNN Center, concert at Phillips Arena, stroll through Centennial Olympic Park, late-night dancing and sushi at Primal, movie at my house.”

Worst date:
Woman: “He took me to the Rusty Nail on Buford Highway because I said it didn’t have to be anything too fancy.”
Man: “Listening to hipsters read elementary schoolers’ essays as they drink PBR at the Goat Farm. Bite me.”

Would you prefer to wait until marriage to have sex with someone?
Women: 14%
Men: 3% (the same percentage that would like to have sex on the first date) 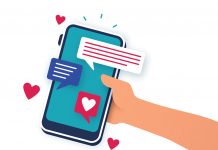 Love at first swipe: What dating apps tell us about Atlantans