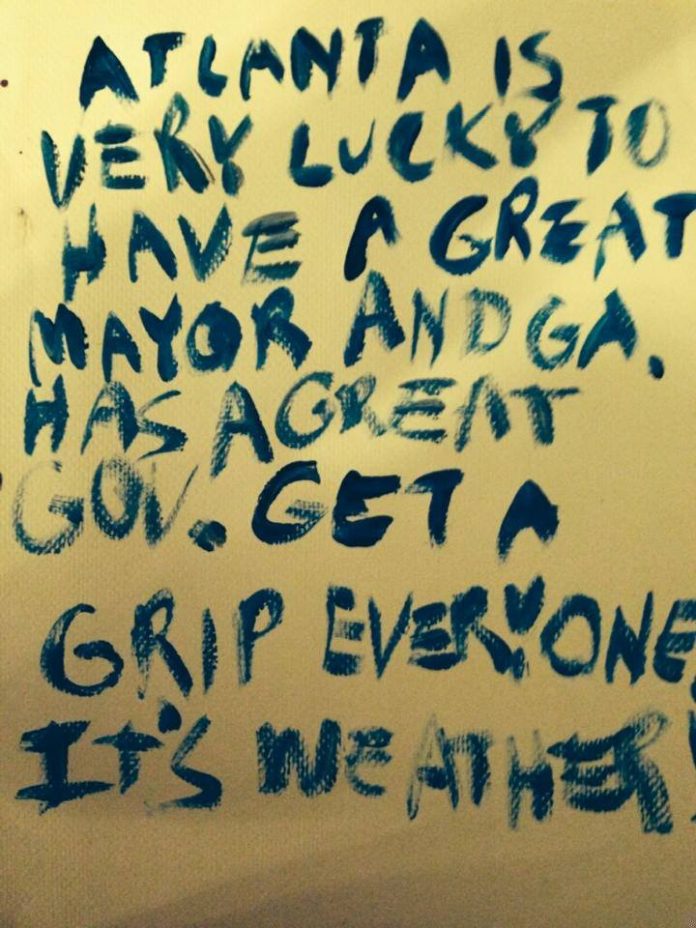 Atlanta artist Steve Penley had a message for the city Friday, so he took to his paints and brushes to best express himself. In black paint, Penley wrote: “Atlanta is very lucky to have a great mayor and Ga. has a great Gov. Get a grip everyone. It’s weather!” He posted it on his artist Facebook page. So why did Penley feel the need to address the ongoing criticism of Georgia governor Nathan Deal and Atlanta Mayor Kasim Reed? For starters, Penley’s work has been unintentionally ridiculed all week.

You see, his original painting of Reed — the one presented to Hizzoner at Tuesday’s Georgia Trend magazine Georgian of the Year award presentation at the downtown Ritz-Carlton — photobombed the award picture with Deal, Reed and Georgia Trend publisher Neely Young. This is the same photo that Deal’s folks posted on his Twitter account Tuesday as the flakes began flying in the city. That now infamous tweet has circulated all week on the news and across social media. It’s been largely used to condemn the elected officials as being out of touch, posing for grip-n-grins in the basement ballroom of a luxury downtown hotel as traffic gridlocked all around them. The photo and painting even made Comedy Central’s The Daily Show with Jon Stewart during Thursday night’s scathingly funny report on our weather mishap.

Penley has painted numerous politicians and business leaders over the years for the state’s business monthly magazine, including the original work used for Reed’s 2014 Georgian of the Year January cover. Reed was given the painting at Tuesday’s luncheon.

Penley’s Facebook note to the city generated 380 “likes” from his 7,918 Facebook fans but also some criticism. “Stick to painting,” advised Thomas Allen Porter. Added Allen Taylor Waldrop: “You apparently weren’t stuck in it for 24 hours like some! It was a disaster and embarrassment! You’ve sniffed too much paint Steve.” Suggested follower Nan Weekley Konze: “I think you should sign it and send it to the Weather Channel.”

Over the years, Penley has painted everyone from Ronald Reagan and George Washington to Winston Churchill and MLK. In his artist bio, the 49-year-old artist, who was raised in Athens and Macon, explains why he enjoys painting historical individuals. It might also best explain his motivation behind Friday’s Facebook message to fans: “In today’s world, we have a tendency toward deconstruction. Today’s heroes seem small and insignificant compared with those of the past. There is no question that many icons of our culture are less than perfect. But there are plenty of other outlets in art and culture to expose their real or imagined weaknesses. I would rather search for the ideal in these subjects and if possible, give them a new dignity.”

Thankfully, the roads are clear today. If he’s going to apply a fresh coat of dignity to Deal and Reed’s weathered images, Penley will require a lot of paint. 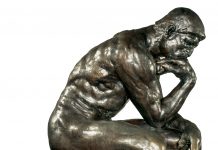